The Wire Troll: Carl Soderberg is a Rising Star 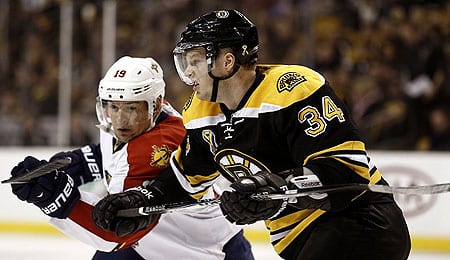 With Chris Wassel doing the family thing this weekend, The Wire Troll duties fall to your trusty editor. Here are our Fantasy hockey waiver wire recommendations of the week.

Carl Soderberg, C, Boston Bruins: As if the Bruins didn’t have enough talent, rookie Soderberg is coming into his own with a point per game over the last five, including two goals and two assists in his last two heading into Sunday. The Swede is not a kid, but with 15 goals and 30 assists through 66 games, he’s making a very nice adjustment in his first full NHL season. Note that three of Soderberg’s last five points have come on the power play as he’s been seeing more time with the man advantage. He’s shown a penchant for getting open — and for finishing, as you can see in the video below.

Darren Helm, C, Detroit Red Wings: Three years ago we identified Helm as a player that seems to be at his best in March. Well, he’s up to his old tricks again with four points in his last two games, including his first career hat trick Saturday against the free-falling Leafs. Helm’s ice time is inconsistent, which makes him a risky play, but you’ve got to figure he’s earned himself a bit more rope after snapping a 20-game goalless drought.

Justin Braun, San Jose Sharks: Braun is quietly enjoying a breakout season for the Sharks, setting career highs in goals, assists and points while going a robust +17 and sitting among the top 30 in blocked shots. Okay, so he hasn’t been as sharp as usual defensively lately, but if you’re in need of blocks, Braun can definitely provide a boost.

Jake Gardiner, Toronto Maple Leafs: Slotted 40th in our Defenseman Rankings heading into the season, Gardiner has not quite lived up to that billing, but he sure is making up for that lately — despite his team’s recent collapse. He’s produced helpers in four straight games (six assists in total), is +3 over his last two, and is seeing a nice bump in ice time over the last week. Over his last seven games, Gardiner has recorded points in all but one as he closes in on his career high for points in a season.

Karri Ramo, Calgary Flames: Heading into the season, we slotted Ramo just outside the top 30 in our Goalie Rankings. Well, he’s generally been a bit below those projections — no thanks to a knee injury that cost him nearly two months, but since returning, he’s looking very strong. Ramo has won three of his four starts since coming back and he’s put up a 2.00 GAA with a great save percentage over that stretch. Dating back to before he got hurt, Ramo has gone 6-1-0 with a 1.96 GAA over his last nine games, so if you need netminding assistance, give him a look.

Cam Talbot, New York Rangers: When we recommended Talbot at the beginning of December we mentioned he was playing better than Henrik Lundqvist. All season long, Talbot was been phenomenal as King Henrik’s backup and he’s going to get the start Sunday in Edmonton, making him a superb plug and play or daily league option. Talbot has enjoyed a super rookie season, and we’d really love to see what he can do as a starter.

Now it’s your turn. Tell us your favourite Fantasy hockey pickup of the week in the comments below.