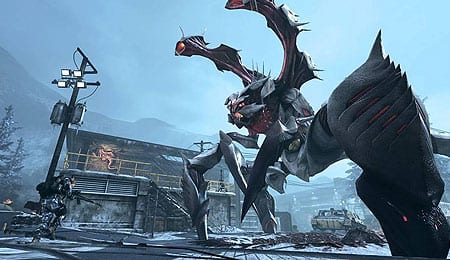 With unusually tepid scores and a user base now spread across four consoles, Call of Duty: Ghosts hasn’t been quite the dominant force it has been in years past. It still has legions of followers, however, and for them last week signaled the arrival of the first of four map packs, Onslaught. Priced at US$14.99 (or included in the Season Pass), let’s see how this DLC stacks up.

Based on the SD hats and whale-esque souvenirs in the gift shop, we’re guessing Bayview draws some inspiration as a small-scale version of Sea World (there’s even a tiny aquarium). It’s a bright map with loads of buildings to duck in and out of as a trolley slowly makes its way back and forth across the level, allowing for brave souls to ride along and try to pick off enemies. A couple of elevated positions also offer long lines of sight, allowing capable snipers to cover the middle.

This can be a really fun map, particularly with Team Deathmatch. Our lone gripe is that the many entry and exit points from buildings tend to foster an unusually high amount of camping, and if you get two or three coordinated players they can pretty effectively hold down a section of the map.

A war-torn neighborhood split by a bridge (a truck loaded with a nuclear bomb sits on it, causing your radar to malfunction if you venture too close) with a ravine below, Containment very much feels like a classic CoD map. There’s very little personality to it, however, and the limited methods of traversal make Domination a tough sell.

Instead of placing Point B in the ravine itself, it’s on the roof of a building on the Point A side. The games we played saw tons of capturing/losing points. It was so prevalent that we’d be skeptical if any spot was held longer than 30 seconds continuously during any of those fights. We’re not going to label it a bad map, but it’s one that’s just sort of there.

Typically when we see remakes we can sort of remember the original. That isn’t the case with Ignition, however, as we played a ton of Modern Warfare 2, and Scrapyard was one of our favourites. So, while we won’t hold anyone accountable for rolling their eyes at its inclusion, for us this classic was a welcome addition to Ghosts’ first map pack.

Even with a few tweaks and some dynamic elements, Ignition is instantly familiar. The same spots that were high traffic in MW2 — namely, the split-level building on one end and the big hangar off to the side (now with rocket test activation) — are still hotly contested. There are loads of hiding spots and ways to flank enemies, and matches result in a lot of fast-paced action.

Easily the standout entrant of the three all-new maps, Fog looks like it was ripped from Resident Evil 4 with all manner of creepy, dilapidated shacks serving as cover. There’s also plenty of requisite gore and unsettling imagery such as dead animals and the type of strangeness associated with cults.

Of course, the most unique aspect of this map is that by completing a specific mission order you’re able to turn into Michael Myers of Halloween fame (complete with well-known theme). As Myers, you move faster, absorb more damage and wield an axe at your hapless foes. It’s weird, but it works… and bear in mind that we usually frown on that type of cross-promotional stuff.

Whether you embrace the gimmick or merely tolerate it, Fog holds up very well across all of the core gameplay types with multiple elevations, paths to get the drop on enemies and lots of quick twitch action when enemies suddenly appear from around a corner or out a window. It’s a strong addition.

Infinity Ward’s answer to Treyarch’s Zombie mode, Extinction gets the first installment in what’s set to be a four-part extension of the mode. Entitled Nightfall, we’re given a little back story about an outbreak that only a few people are aware of — and one of them is trying the blow the whistle. Some may find it completely unnecessary, but we’re not going to complain about being given a little context as to why we’re in the snow drilling nests and fighting swarms of aliens.

As we wrote in our original review of Ghosts, Extinction clicked with us more than Zombies, and this new content further cements that viewpoint. The teleporting sub-boss is a challenging fight, and squaring off against the massive breeder is even tougher. Nightfall is a better representation of the mode’s potential than what launched with the game, and we’re looking forward to the next episode.

With four quality maps and a nice kickoff to the Extinction story, Onslaught is a strong inaugural effort from Infinity Ward. It’s debatable whether there’s anything here to win over the disenfranchised, but those hungry for more content should be pleased.