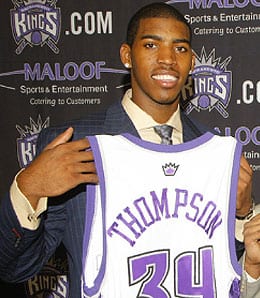 Jason Thompson blew up on Wednesday, but he’s been seriously inconsistent.

Welcome to the Week Eight edition of the Wire Troll, our weekly look at players that may be available on your league waiver wire, but could see a spike in Fantasy value due to a variety of circumstances.

Thanks go out to RotoRob for handling the Troll duties last week, and he’ll be glad to know that I have “de-tidied” the Troll Cave to nearly its pre-existing state before he and the Windex Monster cut a swath through the clutter I call home. When I’m done with things, I put them away, okay Rob? It just takes me awhile to finish some things, okay Rob?

Sheesh – just wait and see if you find that copy of Call of Duty: Black Ops you’ve been jonesing for under your tree this Christmas. Troll – Grinch ….not that big a jump, buddy. The guy’s on my speed dial and he still owes me money from that last skins beat-down I put on him at Bethpage last summer. Green course, no less…dude can’t even work up enough game to get out of the Kiddie Pool. Let’s just say that if you look outside your window come Boxing Day and see dog tracks instead of reindeer tracks in the snow you’ll know that that marker has been called in. Enjoy your Endust Gift Pack and complimentary microfibre towels, Mr. I-just-straightened-up-a-few-things.

Now then, where was I? Oh yes, quite a few opportunities out there this week, but just about all of them carry some measure of risk – kinda like “tidying up” the Troll Cave without permission, eh Rob? On we go.

Note: all stats include the games up to Friday.

Jason Thompson, Sacramento Kings: Since moving into the starting lineup Nov. 27, Thompson has averaged 12.5 points, 8.2 rebounds and 0.8 blocks. While those numbers may seem modest, keep in mind that those six games include a four-point and five-point outing – and that his most recent effort was a 22-point, 14-board, two-block monster against Washington on Wednesday. JT’s athleticism is unquestioned, but his lack of focus (and defense) will invariably land him in Chateu BowWow. His prodigious potential makes him worth an add if you have some dead roster space, but watch him closely – he does play for Nouveau Nellie, after all.

Spencer Hawes, Philadelphia 76ers: He has shown signs of life in December, averaging nine points and nine boards through his first four games. Hawes is still not attempting enough three-pointers for the Troll’s taste, but that 10-point, 12-board, three-block night (yes, with one trey) he posted Tuesday should give you a taste of what he’s capable of on any given night. Add Hawes in deeper leagues, but be ready to cut bait if his minutes drop below about 20 per night.

Thaddeus Young, Philadelphia 76ers: Young has settled into his role as the Sixers’ sixth man, and has been on a nice little roll of late, averaging 17 points and six boards through the first four games of December. Even more noteworthy has been his eagle-eye shooting: 66.7 from the field, and a perfect 11-for-11 from the stripe. Even though Young won’t help much with peripheral stats, he is definitely worth adding in deeper leagues so long as his shots are falling like they have been lately.

Josh McRoberts, Indiana Pacers:  McBob was an intriguing “glue guy” for deeper leagues through the first two months of the season, but his Fantasy value was limited by his inability to put the rock through the rack. That has changed in December, though, as the third-year man has averaged 11 points per outing – while still posting a roto-friendly line of 5.6 rebounds, 4.4 assists, two treys and 1.2 blocks per game. While this may be a fluke, McRoberts is definitely worth adding while he’s channeling Boris Diaw. Oh by the way, he also carries centre eligibility in Yahoo! formats.

Reggie Williams, Golden State Warriors: The Warriors’ swingman has been the prime beneficiary of Stephen Curry’s gimpy ankle, averaging 22 points and 4.5 treys in his first two games as Curry’s replacement. Cautionary note: Eight of Williams’s nine three-pointers came in one game, and he cooled off considerably after his initial 31-point outburst Wednesday. While Curry’s on the mend, Reg-Will is close to being a must-own, but that figures to change once the talented youngster is back in full fettle.

Jodie Meeks, Philadelphia 76ers: The unheralded second-year man supplanted highly-touted rookie Evan Turner in the starting lineup last week, and has averaged 17.5 points and 4.3 treys in his first four games. This pony only knows two tricks, though, as Meeks is a pure shooter and three-point bomber. If you’re in need in those two stat cats, though, ride that horse while he’s hot…just remember to use an insulated saddle, please. An open fire is the only place chestnuts should be roasting this time of year.

Eric Bledsoe, Los Angeles Clippers: Baron Davis’s hammy is barking again, and with centre Chris Kaman out at least three weeks with a sprained ankle, the Clips will need someone to carry the load. Bledsoe has averaged 13 points, five dimes and 1.5 treys in the two games since B-Diddy’s hammy flared up, and he could become a major part of the offense as the Clippers battle the Kings for the rights to the Pacific Division cellar. Add him in deeper leagues, and be ready to pounce in all formats if Davis is shut down for an extended period.