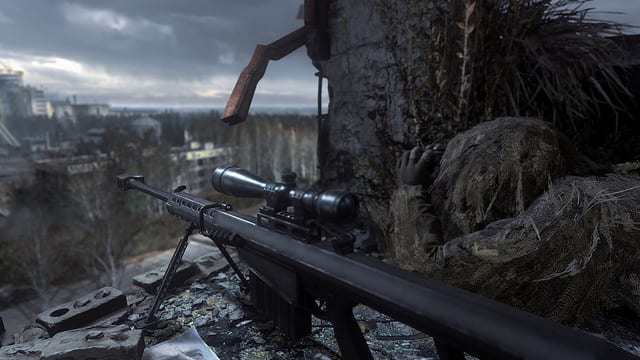 Time to dust off that ghillie suit, soldier.

How long has it been since Call of Duty 4: Modern Warfare hit consoles? So long that we weren’t even reviewing video games, yet — fun fact: World at War was the first non-sports game we covered. Still, despite its age there’s little doubt Modern Warfare stands as one of the most important shooters of all time when it veered away from the World War II setting so many games employed.

Now, the classic is back as Modern Warfare Remastered, which recreates both the campaign and all 16 of its original multiplayer maps (though only 10 are available at launch) in high definition. At this point the game will only be available to those that purchase Infinite Warfare Legacy, Legacy Pro and Digital Deluxe versions.

We’ve already had a chance to play through the campaign — multiplayer hasn’t come online, yet — so we thought we’d do something of a retro review of one of the only Call of Duty titles we haven’t covered.

When dealing with an updated version of an older game there are really only two questions that need to be answered: (a) how much better does it look?; and (b) how well does the actual gameplay hold up?

Starting with the former, Modern Warfare Remastered looks significantly better than its last-gen counterpart, so if you feared Activision would simply apply a quick coat of HD paint you’ll be glad to know it has received some serious upgrades. Although that’s not to imply that the game looks like it was built for current consoles.

There are still moments when the old-school level design that keeps you on a pretty linear path feels drab and uninspired. Going prone reveals a lack of detail in some of the less crucial areas, and there are certain effects that the game just doesn’t pull off that well — e.g., tossing smoke grenades. Meanwhile, animations look pretty smooth outside of the odd wonky death.

Gameplay has a retro feel to it, but in the best possible way. It’s like going back and seeing where things really started to change with first-person shooters, and it also underscores just how far removed the current games have become with the introduction of so many superhuman elements (exo-suits, vertical combat, cloaking, speed boosts, etc.).

Here you’re a soldier. A highly trained one to be sure, but you’re not an army of one. In fact, the game is clearly designed for A.I. teammates like Captain Price to take point, guiding you through the levels and providing support. While there are times this feels a little restrictive, those sections rarely last long and you can rest assured another intense firefight is just around the corner.

A few elements haven’t held up nearly as well, however, such as the “evil jar” approach to enemy tangos where they’ll literally continue to materialize to man a position until you reach some arbitrary point of advancement that informs them to stop spawning.

Modern Warfare Remastered also feels rather segmented, breaking up the standard shooting with very specific missions. Here you’re firing from a gunship, and now you’re a sniper, and now you’re defending a position. The good news is that they’re all still fun to actually play. It’s just that the flow can feel odd.

Although unavailable as a standalone, Modern Warfare Remastered carries a minimum cost of US$20, which is the amount to jump from the standard edition to the Legacy. If you loved it the first time around, that’s an easy recommendation. If you missed it you may find the pacing to be slow, though we’d still suggest giving it a shot.