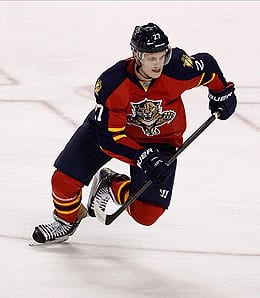 As the shopping days dwindle down toward Christmas, we decided to go to the bottom of the waiver barrel. When we say bottom we mean the players that time forgot. It will be a quick adventure into the lowest depth of the Fantasy hockey world.

This interesting fact is that the wire this season is a lot less loaded because of all these injuries (46 in the last week alone). Decisions are having to be reached on players that would normally never even get a sniff of a Fantasy roster but yet here we are. What can you do? Is there any hope? Those are excellent questions.

It is, as always, time to take a look through the deepest and darkest Fantasy areas. Now is the time for this week’s edition of The Wire Troll.

Nick Bjugstad, C, Florida Panthers: The less than one per cent owned club surprisingly features Bjugstad, an unquestionably talented player. The fact that he is averaging a point every other game on a rebuilding Florida team is encouraging. Bjugstad is worth a look in deeper leagues that require four or five centres as his goal scoring touch and ability to create shines though in patches (like that amazing wraparound goal he scored Thursday — see video below). Expect more of these flashes going forward.

Zack Smith, C, Ottawa Senators: Smith may not provide a lot of points but his role has gradually increased again. Now the third line center, he has three points in his last four games while being owned in less than one per cent of all Fantasy hockey leagues. With the way things are going in Ottawa, Smith has a slight chance of seeing some power play time. He does generate 2.25 shots per game and that is not half bad. Honestly, we have seen worse decisions.

Marcus Kruger, C, Chicago Blackhawks: This is another deep flier pick at centre. The average time on ice is a bit of an issue but Kruger owners have enjoyed the fact that he’s racked up 31 blocks, a surprisingly high number for a forward. He has 13 points in 31 games which is close to a point every other contest as Chicago just seems to always find these guys who play “sheltered minutes,” yet produce a good bit offensively from unlikely roles. The key in guys like Kruger is just to expect certain stat padder categories. Chicago is relatively healthy right now so do not expect much, if any, power play time. That being said, points almost seem to come from Kruger effortlessly at times.

Cal Clutterbuck, RW, New York Islanders: We include Clutterbuck because a team has to take a shot at some point. It is abundantly clear that he creates space when he is on the ice. That is the type of energy all four lines need on Long Island. Clutterbuck is owned in less than one half of one per cent of all Fantasy leagues and while he will typically not play more than 15 minutes per night, with the Islanders struggling at 8-17-5, maybe he should.

Phillip Larsen, D, Edmonton Oilers: This is a riverboat gunshot straight draw waiting to not pan out, but Larsen has some potential and Fantasy owners need to take a load off and relax a bit. Larsen is not that developed defensively in the NHL and while his six points in nine games is great, three came in one magical night against Chicago. Those type of outbursts are rare but at less than one per cent owned, hey, why not take a shot?

As always thanks for reading, ladies and gentlemen. Good luck in your fantasy leagues this week. Expect a little more tough sledding and follow me @ChrisWasselTHW.