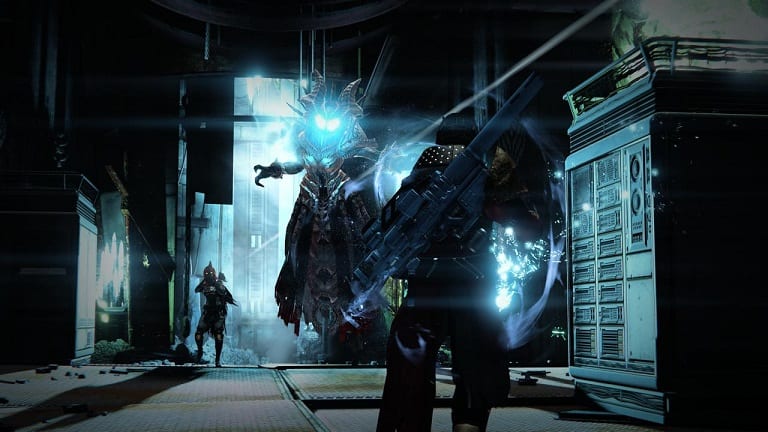 Yes, you probably have been there before… many times.

As previously mentioned, one of the downsides of reviewing games is that we’re often forced to cast them aside and move on to the next one whether we’re ready or not. Such was the case with Destiny, the flawed but very fun collaboration between Bungie and Activision, which had to be shelved as the busy gaming season arrived in full force.

With that season winding down, Bungie has chosen to release its first full blown expansion, The Dark Below (individually priced at US$19.99, or included in the Expansion Pass for US$34.99). On paper there appears to be a respectable amount of new content: three new story missions and additional quests, a new strike, three new adversarial maps for the crucible, the addition of a second raid and — perhaps most important to the community — an increased light level and more gear. But let’s see how it holds up.

Put bluntly, the story-driven additions are disappointing. A new character, Eris, arrives at the tower to warn about the threat of Crota, a God that The Hive intend to summon to bring ruin upon the world. It’s fine as a setup, but there’s minimal payoff.

Those three new missions can be completed in less than an hour (the first of which cannot be replayed), and there’s very little in terms of new locations. Given the game’s pseudo-MMORPG roots, the lack of anything truly fresh is a real bummer.

Those that enjoy battling it out in the crucible are certainly looking forward to the map pack aspect of The Dark Below, which offers up three additions: Pantheon, Skyshock and The Cauldron. Pantheon takes place in The Black Garden, and it has a cool aesthetic, but structurally it feels similar to previous maps. Skyshock is probably the most unique and fun of the newcomers — even if it drags up some serious Titanfall flashbacks. The Cauldron is a dark, circular map that features Hive architecture. Like the others, it’s enjoyable without stepping outside the game’s established comfort zone.

For the more cooperative, there’s also a new strike and a new raid. Both are welcome additions as the best parts of Destiny have been found in these teamwork-oriented ventures. There’s still no option to be paired with random players for the raid, which, while understandable, remains frustrating for those that don’t play regularly enough to be part of a clan that works like a well-oiled machine. Even if the odds of completion are low, it’d still be fun to jump in with others — hell, maybe we’d even meet people we’d like to team up with later.

Perhaps the biggest selling point to those that have fully bought into the grinding necessary to be decked out in the best gear is the raising of the light level cap from 30 to 32. Along with the bump comes new, more powerful weapons and armour. The rub, however, is that all that stuff you spent hours buying and upgrading no longer packs an adequate punch. Plus, additional cost barriers have been erected, necessitating even more hours of grinding to reclaim a worthy loadout.

There are things to like about The Dark Below, but it ultimately feels thin on meaningful content — this is especially true if you don’t take part in one or more aspects of the game since additions are sprinkled throughout the campaign, vanguard and crucible. Here’s hoping March’s House of Wolves offers more bang for your buck.

Everything you do advances your character in some way, whether it’s leveling up, improving armour/weapon potency, increasing your standing with factions, earning glimmer or the game’s other currencies to buy new items and so on. It’s more addicting than just the constant search for better loot.