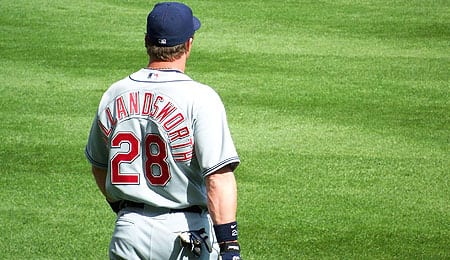 Todd Hollandsworth is probably headed back to the bench.

Casey Blake, out with a strained oblique for almost a month now, returned to the Indians’ lineup Thursday, paying immediate dividends with a two-run jack. Blake’s return means Franklin Gutierrez is heading back to his favourite chicken wing haunts in Buffalo, and that Todd Hollandsworth will see less action. Activate Blake immediately. He’s enjoying the finest year of his career and looks like he’ll pick up where he left off when he landed on the DL.

The outfielder, who turns 28 on Thursday, was never quite able to stick in the majors, making brief appearances every season since 2002. All told, he’s appeared in 104 major league games, going 79-for-334 with 14 homers, 44 RBI and four steals. It’s that .299 OBP that hurts and his .416 SLG does not speak well to his power. This season, Ludwick has already produced 19 doubles and 16 homers in 89 games and 330 at-bats for Toledo. He’s racked up 51 runs and 85 hits with an 810 OPS, but is dogged by a horrible K/BB ratio. In fact, the Florida native has already topped 100 Ks. Still, considering he hit just .191 at Triple-A Buffalo last year, at least Ludwick is showing something in the minors this year, perhaps enough to earn another call at some point.