A Night with Brooks Robinson 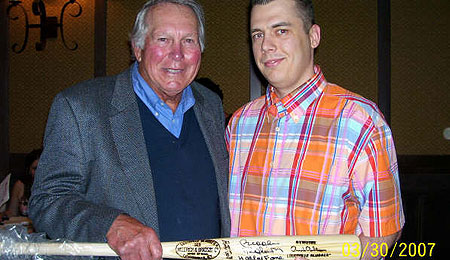 It is every sports fan’s dream to meet and mingle with a Hall of Fame player. Being able to come face to face with a living legend in any sport is a rare pleasure for the average fan. I was able to have this dream come true when I went to a charity dinner for the Road Runner Little League in Albuquerque, New Mexico with Baltimore Orioles third baseman and 1983 Hall of Fame inductee Brooks Robinson. For anyone not familiar with Robinson, he was probably the best fielding third baseman to ever grace the baseball diamond and had the nickname “Hoover” because whatever hits he got close to were sucked up like the vacuum.

The room had around 10 tables set up for 100 guests comprised of adults and peewee-aged children. The now 70-year-old Brooks (as he prefers to be called, as opposed to Mr. Robinson) showed up with his wife and couldn’t have been any more personable. Shaking hands, telling jokes, laughing with people he didn’t even know; if you didn’t know any better you would have thought Brooks had been friends for years with the guests. Then comes my turn to talk to him…what do you say to a legend? A man who is one of only 90 Hall of Fame players still alive. I walk up and shake his hand and he asks me how I am doing and if I live close by. Brooks Robinson is talking to me as if we are the only two people in the room.

I talk with him for a minute, get a picture taken with him, my wife, and myself. After dinner, Brooks gets up and starts telling his stories to the room. The first is one about this time he was speaking at a Baltimore school and a child comes up to him with 21 Brooks Robinson baseball cards he wanted signed. Brooks asked him why in the world he would need all 21 of them signed. The kid explained that since he had been out the game for so long that it took 21 autographed cards of his for him to being to trade and get just one Cal Ripken card. Brooks had several stories to tell, but that was certainly the funniest.

At one point we were allowed to ask questions and the topic of steroids quickly came up. Brooks made it very clear what his thoughts on the topic were.

“Those guys should all be banned from the game,” he said. “Shoot, we never exercised in the offseason. We showed up at spring training and worked our butts off to get in shape. These guys now are so much bigger than we ever were. But, I will say that if you need steroids to get there (major leagues), they won’t help you much anyway. The skills have to be there already. But, they will increase your output as a player. Steroids are cheating, plain and simple.”

Brooks also spoke about the famous lithograph done by Norman Rockwell of him signing a ball in the outfield for a kid. The lithograph was very special to him and he would eventually buy the original at an auction. After Brooks’ speech, the night’s auction started. There was signed memorabilia from Robinson and other baseball players, local businesses had donated items, and also a fantasy camp trip for one. The first thing to be auctioned was a signed shadow box with a picture of Brooks, a piece of a bat, and an Orioles team coin. This went for $410 and I was certain at that point that I would not be getting anything from this evening. Well, long story short, as my birthday present from the wife, I got an exact replica bat of what Brooks used in his playing days — a Louisville Slugger, Brooks Robinson edition, with his name burned into it. Not only that, it was even autographed. Later, I would get Brooks to sign it to me and it now reads:

(Bo is what my friends call me, but James is my real name.)

After the auction was over, we watched a short video about Brooks that included his career highlights. Brooks stayed and kept shaking hands until 10:30 p.m. I was a bit nervous because I didn’t want to spend the evening with a baseball player that is tired of the fans and soured by the current state of the game. But, Brooks Robinson was the most pleasant athlete I have ever met. This guy is what baseball is about — or should be all about. He loves the game, he appreciates the fans, and he is as active at 70 as anyone I have seen. Brooks Robinson should be the face of baseball, and if more people could meet former players like Brooks, they would walk away with a renewed love for the game and its players. Brooks Robinson, you have a fan for life in Rio Rancho!

I would like to thank the Roadrunner Little League for bringing in Brooks Robinson for this event and 610 The Sports Animal for providing me with the tickets. Roadrunner has been in Albuquerque since 1964 and currently has over 750 baseball and softball players between the ages of five and 16 participating in six divisions. I would encourage anyone that can support the league to do so as it is a non-profit corporation. It is our children that are our future (please don’t start humming the song) and with sports being cut out of so many schools today, programs like this one is vital to our future. Thanks again, Roadrunner Little League, Ian Martin, and especially Brooks Robinson!