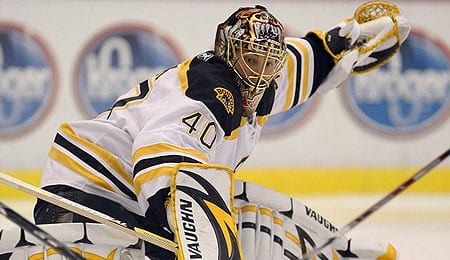 Tuukka Rask has been a real roll as the Bruins’ backup netminder.

The words “at press time” are always used in time-sensitive posts. Think of how close the end of 2011 is, hockey fans. The NHL takes two days off as we are officially at the midway point of the Fantasy hockey season. Eleven weeks are done and 11 are left.

We want our readers to take these two days and spend them with their families. That being said, it is good to remember which players off the waiver wire have really fulfilled our wishes this holiday season. Please remember Part One of our wishlist from last week, ladies and gentlemen. Now for a little short reading this week, here is the conclusion.

Wish No. 1: If only there was a rookie that could come out of nowhere…

Adam Henrique, C, New Jersey Devils: Henrique continues to produce and now has the entire NHL on notice. If you really want some concrete proof, look at TSN’s player rankings for rookie impact from Scott Cullen. The centre now ranks ahead of Ryan Nugent-Hopkins. Think about this for a second, RNH won the first two NHL Rookie Of The Month awards, people. Yet, this kid from New Jersey, who was down in the AHL for most of October, has stepped up and parlayed his success into a potential Calder Trophy run. Henrique has nine goals, 17 assists and 26 points on the season with the best maybe yet to come. Fantasy players have been served.

Wish No. 2: I just need a backup that will be a good No. 3 goalie in my Fantasy league…

Tuukka Rask, G, Boston Bruins: Remember when Rask could never get an ounce of goal support? Since the Bruins have gone on a 20-2-1 run, those days have vanished. Rask started out 0-3 early in the season, but has gone 7-1-1 in his last nine decisions. So, for someone who is only expected to play in about 20-to-30 games, Rask is the perfect No. 3 goalie for your Fantasy team. His 1.65 GAA, .944 save percentage, and two shutouts are too good to pass up. Sure Brian Elliott has been tearing it up for St. Louis, but realistically he is at the platoon level for Fantasy goalies. Rask is not. It is that easy.

Wish No. 3: I need a defenseman who bursts out of nowhere with unexpected firepower…

Brian Campbell, D, Florida Panthers: Campbell signed with Florida in the offseason and was considered to be overpaid a bit, to be honest. Fantasy-wise nobody really knew what to expect, but maybe a slight bounce back from his 27 points in 65 games with Chicago last season. All of a sudden, Campbell started tallying assists on the power play. Before anyone knew it, he had 15 assists on the man advantage on his way to a 27-point campaign in 35 games so far. Campbell also is a +8 with 61 shots on goal (on pace for 150 shots). Will these numbers hold up? They just might.

That is it for this week. On behalf of myself, I would like to wish everyone a Merry Christmas and, just think, the 2012 World Junior Championships start on Monday. The Wire Troll will be back next weekend as we head into 2012. Bye bye for now.