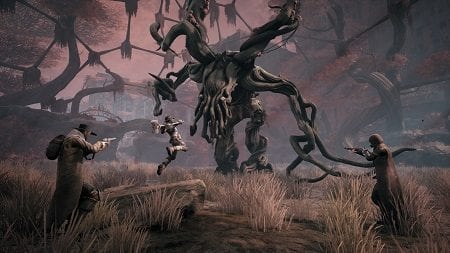 Treebeard is going down hard.

As we once again careen into the busiest part of the gaming calendar, it’s a virtual certainty that triple-A shooters will be well represented — Gears 5, Borderlands 3, Ghost Recon Breakpoint, Modern Warfare and Shadowkeep all spring to mind with releases over these next few months. Into that crowded space comes Remnant: From the Ashes, the newest project from Gunfire Games, which last developed the enjoyable Darksiders III, to try to carve out some real estate amid the winter shooter rush.

Although it’s not a cover-based shooter, Remnant does share some similarities with Microsoft’s third-person juggernaut Gears of War in the way you move and dive away from danger as well as the chunky feel of the shooting. You can quickly swap between your two guns — you can carry more but only two can be equipped at a time and there’s a fixed pool of ammo so switching from an empty sniper rifle to a shotgun won’t create more rounds — and swing a melee weapon to fend off waves of advancing enemies.

Remnant does employ a stamina meter, which has undercut the fun in numerous games over the years. It’s not too heavy handed here, though, as only sprinting and your evasive dive drain the meter, so you don’t have to concern yourself about flailing away with melee strikes. It refills very quickly once you cease sprinting/rolling, too, and it was rare that it affected us in a big spot.

For as smooth as it handles, Remnant shows its relatively modest roots in the presentation department. The various worlds are well designed and offer a creepy slant, but they don’t pop like their triple-A counterparts with muddy textures and sporadically enforced rules for what items can and cannot be destroyed. While enemies are plentiful, you’ll encounter the same handful of types over and over again within a zone, and not all of them are winners from a design perspective (flying skulls? really?).

There isn’t a ton of story or character development, though the fairly brief conversations feature decent performances. Audio cues are important during actual gameplay, however, and the tone that signals a “special” enemy has been spawned can be a harbinger of your impending doom depending on how low you are on health and/or ammo. Enemies also make their own unique noises, and you’ll need to keep your ears open since they’ll attack from anywhere and oft times that sound is your only warning.

There is a semblance of a story in Remnant: From the Ashes, though it’s mostly broad strokes about humanity on the brink and your need to save it by driving back an enemy known as The Root. Cut scenes and narrative elements are few and far between as whatever story there is takes a backseat to a gameplay loop of warping to a new area, clearing it of enemies and eventually taking down a boss. It’s a familiar formula, and the Dark Souls influence is unmistakable.

When it’s at its best, Remnant really delivers. The moment-to-moment combat is intense and challenging, whether playing solo or teaming up with others. Both gun play and melee fighting feel meaty and satisfying as you riddle an enemy with a clip’s worth of pistol fire before evading his counter with a well-timed roll and finish him off with a few slashes of your sword. It’s during these pitched battles that the game feels like it can do no wrong.

Unfortunately, that’s not the case. The procedurally generated world ends up creating too many scenarios in which death is pretty much the only outcome, flooding an area with one enemy after another, leaving you with no viable means of escape or overcoming the odds. In theory, these random difficulty spikes keep you at a heightened sense of awareness. In practice, it feels like enemies are being pulled out of the ether to overwhelm you. It doesn’t feel like a challenge. It feels like bullshit.

That we repeatedly picked the controller right up and went back for more is both a testament to just how good the action usually is and how frequent the checkpoints are. Pretty much every time you reach a new area you’ll be welcomed by a checkpoint, and any leveling progress or items you collect are always yours to keep.

Remnant underwhelms with its loot, however, heavily restricting where and how you can find or purchase new armour and weapons. Instead you’ll primarily find consumables, scrap (the in-game currency) and upgrade materials to turn your Pistol +2 into a Pistol +3 and so on. In that way there is little sense of progression, and the game would benefit from more meaningful stuff to locate.

As the game says, it is possible to play through Remnant alone, but it was clearly designed with multiplayer in mind as in that mode there are more targets for the enemy to parse and more damage deliverers trying to send them into the abyss. Still, we wouldn’t let a lack of ready-made co-op buddies be a deal breaker. It can be done alone, and our solo triumphs were always more satisfying than teaming up with others.

Remnant: From the Ashes has great bones thanks to its strong combat. It’s well worth playing now and with a few modest tweaks via future patches it could be even better.