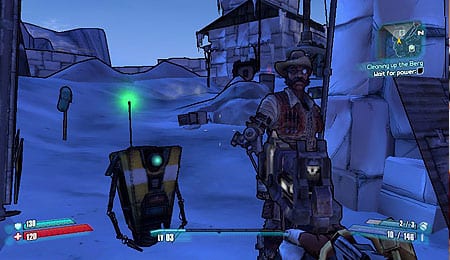 Despite writing a fairly glowing review when Borderlands 2 originally came out, we actually feel like we undersold what a tremendous game it was. There’s an addictive quality to it that few titles can come close to matching, and that (combined with the fun of multiplayer) is what kept us playing through it again and again.

With so many hours under our belt, we wondered if starting anew on another system would undermine our enjoyment of Borderlands 2 on the PlayStation Vita. Incredibly, it didn’t.

Since the Vita lacks both bumpers and clickable analog sticks, their respective functions needed to be reconfigured. To Iron Galaxy’s credit that transition has been handled deftly. Melee and sprint, previously mapped to L3/R3, is now done by using the rear touch pad — press down on the left side and you’ll sprint, press right and you’ll (usually) melee. Grenades and class-specific abilities are deployed by tapping in the area of their icons on the touch screen.

It’s not perfect, particularly the rear touch pad, as our fingers would occasionally slip based on how we held the Vita, causing our character to flail wildly for no reason. Conversely, there’d also be times when we’d want to melee a charging Bullymong or psycho and nothing would happen. At which point it’d be us, and not our vault hunter, that was flailing wildly. Outside of those hiccups, however, it’s really a strong effort to keep the game feeling right. Plus, if you don’t like the setup, the game allows you to freely change it to suit your needs — though nothing fixes the periodic non-responsiveness of the rear pad.

Aiming also gets a little choppy at times. It’s not really surprising given the lowered frame rate and distance between you and your foes — unlike Killzone: Mercenary, this was not built with a five-inch screen in mind — but in the heat of battle your only thought will be, “WHY THE #!*& DO I KEEP MISSING!!?!”

When you’re talking about the world of Borderlands 2, the overall vibe is the most important thing about the presentation, and the Vita port nails it. Sure, textures might load slowly, things might look grainy, and distant landmarks might have vanished, but none of that hurts the feeling that you are, in fact, playing Borderlands 2 and not some half-assed port.

That being said, there are some additional concessions that should be mentioned. The most obvious one is that defeated enemies no longer ragdoll their way into humorous death poses. Now they explode, which keeps the ground free of corpses and doesn’t further bog down the game. There also seem to be fewer enemies at once in some areas. The game maintains a decent frame rate much of the time, but it can slow noticeably during more hectic action.

There are also some lengthy load times that crop up every time you enter a new area. We started counting early on and routinely got past 30 seconds. We also encountered issues in which inputs weren’t immediately acknowledged in things like character creation/modification or when tabbing through your inventory.

Although it wouldn’t surprise us to learn that the dialogue spewed by random enemies had been reduced in scope and/or frequency, we didn’t really notice a difference. Everything seems spot on with the voice acting, soundtrack and sound effects, though we did encounter a few instances in which audio lagged or cut out entirely.

With this being a direct port of the Borderlands 2, we won’t rehash what we wrote in our original review. Instead, let’s focus again on the differences between the console and handheld releases. For starters, this version comes loaded with some (though not all) of the DLC. This includes Captain Scarlett and her Pirate’s Booty and Mr. Torgue’s Campaign of Carnage, which we’d rate as the two weakest expansions, both additional characters (Gaige and Krieg) and a Vault Hunter upgrade pack that allows you to reach Level 61.

That’s undeniably a lot of content, but we can’t help but wonder why the two strongest add-ons — Sir Hammerlock’s Big Game Hunt and Tiny Tina’s Assault on Dragon’s Keep — are missing along with the second upgrade that pushed the level cap all the way up to 72. If it was an either/or scenario on the DLC, they picked the wrong two.

We’d think this could create some issues when employing the cross-save functionality for those that have weapons and shields native to said DLC, though since all those hours we spent thinning the population on Pandora were done on the Xbox 360, we have no way of testing our theory.

Perhaps the biggest change is the reduction in party size from four down to two. This had a negligible effect on us since roughly 95 per cent of the time we spent playing Borderlands 2 was in a two-player setting, but if you were fantasizing about you and three buddies jumping into the same Vita session, we’re afraid your hopes have been dashed.

One last thing that surprised us about Borderlands 2 was how well it lends itself to the shorter play sessions that define portable gaming. It never occurred to us when we’d spend five hours straight looking for orange weapons, but many of the side missions can be completed in fairly short order. As such, it lends itself well to the medium.

You can choose to nitpick and harrumph about what Borderlands 2 on the Vita doesn’t have or what aspects aren’t as good as the console version, but that’s overlooking that a game of this size and depth is playable on a handheld. Whatever concessions were made to make that a reality, it still looks, feels and plays like Borderlands 2. And that’s pretty damn cool.

Note: this was reviewed on the original Vita (not the Slim) as a downloaded file on a 32 GB memory card.