The Wire Troll: Bobby Rainey is Bringing it for Bucs 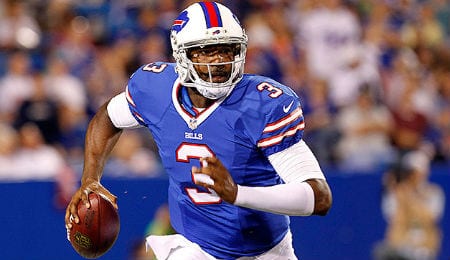 Can we finally give E.J. Manuel some credit? (Majorleaguefantasysports.com)

With NFL and many of its Fantasy stars succumbing to a variety injuries and various off-field legal troubles it may seem like an obvious choice to grab their backups. However, sometimes they are not available. So while you click through your free agent pool to see Knile Davis and Danny Woodhead are already owned, we present to you The Wire Troll for Week Three.

E.J. Manuel, Buffalo Bills: No one (besides Vaney Hariri) wanted to give Manuel any credit this offseason. We dissed both his shiny new toy and him in our 2014 Busts. It’s quite possible Manuel simply learned what not to do in the preseason (see video below). Now after two solid performances and a heavy dose of rookie Sammy Watkins, Vaney and his Bills are 2-0. In standard leagues Manuel has more points than Tom Brady, Tony Romo and Ben Roethlisberger. While he is not quite John Elway or Jim Kelly just yet, Manuel’s maturation is clearly moving forward.

Kirk Cousins, Washington Redskins: We realize Cousins played and succeeded versus Jacksonville while on his home turf. However, he will now take on Philadelphia, which is certainly beatable. This is Cousins’ chance to outshine the highly touted but fragile Robert Griffin III. With games on the schedule against the Cowboys and the Giants, Cousins deserve consideration as a crafty bye week replacement.

Donald Brown, San Diego Chargers: While Danny Woodhead’s presence means receptions could be limited, we still expect Brown to see the between tackles crunching. Starter Ryan Mathews will probably be out at least a month, so Brown should be a worthy option in the short-term. We would probably not start Brown this weekend at Buffalo, but looking ahead with Jacksonville and Oakland on the schedule we love his value.

Bobby Rainey, Tampa Bay Buccaneers: Time to make it Rainey. Who needs a “muscle hamster” (Doug Martin) when Rainey is carving to the tune of 6.5 yards per carry? Remember when you respected the Rams defense? Well Rainey did not and he also caught three balls for 30 yards. Don’t expect Josh McCown to vulture too many more TD opportunities. And, even if Martin suits up Thursday he will certainly not be 100 per cent. Leave Matt Asiata and Khiry Robinson alone — Rainey has done this before.

Brian Quick, St. Louis Rams: Sure, we all know Tavon Austin is the next Santana Moss or Jacquez Green, but so far he is no Brian Quick! While Quick may not actually be as fast as his name suggests, he is rapidly making himself Fantasy relevant. Two straight seven-reception performances will do that. PPR homers will drop lots of FAAB greenbacks for such consistency. Flex option? You bet your 0-2 ass he is!

Niles Paul, Washington Redskins: After his four receptions on four targets for 86 yards in Week One, Paul ripped down eight passes (on 11 targets) for 99 yards and a TD in Week Two. With the delicate Jordan Reed out, those of you that missed out on Larry Donnell last week (or Jason Witten and Jordan Cameron owners) should put in a claim for Paul.