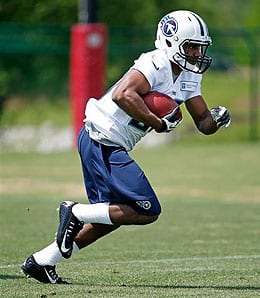 Bishop Sankey was the first running back off the board. (AP Photo/Mark Humphrey)

Last week, we broke down the quarterbacks that were drafted. This week, we tackle the running backs. Many have said this is a position that is less important nowadays. While we think there is some truth to that, we also believe this class of RBs could end up being a very strong one.

Bishop Sankey, Tennessee Titans: After talking with Jack Follman of PacificTakes.com we were not surprised that Sankey was the first RB selected. Coincidentally we believe Sankey could the top rookie back this season. He should start over Shonn Greene and given his pass blocking skills he should see the majority of the snaps. Sankey simply has something that’s hard to explain… maybe it’s razzle-dazzle (see video below), but whatever it is we believe it will make him successful.

Jeremy Hill, Cincinnati Bengals: Two hundred and thirty pound running backs don’t come around very often, but Hill is really light on his feet. He isn’t a burner but Cincy feels he can eventually provide more than BenJarvus Green-Ellis has in the past. As for this year, Hill is a No. 3 running back with the potential to be a first and second down back for the Bengals given the situation.

Carlos Hyde, San Francisco 49ers: In Hyde, we have another 230-pound ball carrier and this one is pure power. He runs with strength, and upon contact power exudes from his hips and thighs so he never goes down without a fight. The 49ers have been searching for Frank Gore’s heir for a while now. We think Hyde is the long-awaited solution. Gore may have one or two seasons left in him and he is unlikely to have another 1,000-yard performance. Hyde will provide San Francisco with a runner similar to Gore, so the rest of this offense should be comfortable when the rook gets his chance. Expect Hyde to get 5-to-10 plays per game and we’d recommend drafting him late to reap the keeper rewards in 2015.

Charles Sims, Tampa Bay Buccaneers: Does anyone remember Steve Slaton? He was the last University of West Viriginia RB to “make it” in the an NFL — until he literally fumbled his career away. We bring him up because the UWV system has produced some very intriguing prospects lately (QB Pat White, WR/KR Tavon Austin and QB Geno Smith). They all had their own levels of hype and criticism. Now, unless you write for RotoRob.com you probably don’t realize there is hype around the latest Mountaineer standout Sims. Tampa drafted him to back up “the Muscle Hamster” (Doug Martin) who missed half of 2013 with a torn labrum in his left shoulder. As we said in our May 14 Podcast, when an NFL RB gets hurt, he never fully recovers. All this means that Sims will definitely see some action. Plus he can catch the ball better than the rest of these rookie runners. So once Martin gets hurt, Sims will be a waiver darling. Don’t miss out on Sims’ potential — draft him late so you can keep him for 2015 and start in your 2014 Fantasy playoffs.

Tre Mason, St. Louis Rams: It’s no secret that we here at RotoRob.com love Mason. With second-year RB Zac Stacy already in the fold, Mason will be lightning to Stacy’s thunder. Mason will undergo surgery on a wrist sheath prior to the start of training camp, so monitor his health before you draft. That may also cause him to slip in your draft, as he might be fairly quiet for the first four games or so. We suggest you remember Mason’s name in the closing rounds because his vision and running style should translate well in the NFL. Rookies backs usually start slow (i.e., Eddie Lacy in 2013) but the reward in keeper leagues for taking a chance on one late can be huge.

Terrance West, Cleveland Browns: When these small school guys hit the NFL it’s always a major guessing game on how their skill will translate. We can tell you that West anticipates well and rarely goes down without falling forward. The Browns need a consistent RB and they signed the battered and bruised Ben Tate to be their starter. West should see some action early on and when Tate gets hurt, West will be a Wire Troll darling. West has soft hands and he caught many pitches in Townson’s triple option scheme. That skill could come in very handy as the third down back for the Browns.

Jerick McKinnon, Minnesota Vikings: This Georgia Southern product is not a household name and he will be backing up the best RB in the NFL, Adrian Peterson. So, what is there to know about McKinnon? He recorded the the fastest 40-time of any running back at the Combine and he led all RBs in bench reps with 32 (six more than anyone else). While AP remains entrenched, please remember he is not 25 anymore. Chances are if you draft Peterson, you will want his handcuff and that is now McKinnon. Buying low can never be understated. Again, the small school stigma factors in here. However, we are buying the hype surrounding McKinnon. It might be too early but he has plenty of time to learn.

Devonta Freeman, Atlanta Falcons: As much as the Falcons would like a mulligan for last season we all know it’s just not possible. But hey, at least they got a reward in Round One in OT Jake Matthews. They also can’t rescind their free agent deal with the dreadful Steven Jackson. So why did they draft another RB? We all know they love their skill position players in Atlanta and the retirement of Jason Snelling left a need. So why the 5’8″ Freeman? They already have 5’6″ featherweight Jacquizz Rodgers. The Falcons claim Jackson is still the starter even though he has only played all 16 games three times in his 11-year career. Enter Freeman as the youthful insurance policy. He is an explosive little man who is comfortable in I-formation, as wingback and at wide receiver — not to mention Freeman can throw a block in passing and running situations. He can also catch much like current third down back Rodgers. You can be sure the Falcons will have a Freeman package and if either Jackson or Rodgers gets hurt, Freeman will be hot commodity. Given Jackson’s age, the dynasty implications could be massive for Freeman.

Andre Williams, New York Giants: For whatever reason, the Giants always seem to use multiple running backs. Williams is a true north-south beast and the Giants will need that. We think free agent signee Rashad Jennings will start over Williams, however, that being said, Williams could be touchdown vulture much like Brandon Jacobs was to Tiki Barber. Williams slipped in the draft because he seemingly has no pass catching skills and some feel he may never be a true No. 1 RB. Yes, he’s raw in that department but that doesn’t mean he will never develop.

Ka’Deem Carey, Chicago Bears: We know Carey only ran a 4.69 40, but when this kid sees the hole he explodes through it. He was the 2013 PAC-12 Offensive Player of the Year after rushing for 1,885 yards. Obviously, Carey is Matt Forte’s backup and handcuff, but we think he could also be Forte’s touchdown vulture. Carey should be drafted in most formats because the aging Forte has an injury history. Carey caught 77 balls in his three seasons at Arizona, so he should adequately fulfill Forte’s role in case of injury.

De’Anthony Thomas, Kansas City Chiefs: Speed is always a feature that is attractive in the draft. We are certain if Al Davis was still alive that Thomas would be a Raider and not a Chief. Kansas City lost its dual threat Dexter McCluster to free agency, so believer this is why it reached for the small Thomas here. Thomas’s lack of size will limit his opportunities early on, so he will have to make the most of them. For now, we don’t see the Chiefs letting Thomas run between the tackles. KC has workhorse Jamaal Charles as its feature back, so Thomas may have to cut his teeth as a slot receiver/motion man. If you want to nab him in the closing rounds we will not talk you out it. The potential is certainly there but we don’t see Thomas catching more than five balls a game in 2014.

James C. White, New England Patriots: This dude must have rubber ankles because he can turn and carve up defenses. White was not a highly touted player, but he can sure add some flash to New England. Given Stevan Ridley’s butter fingers and LeGarrette Blount’s departure, we expect White to play a big role in this offense. Don’t be disgruntled if White doesn’t produce the first month. With opportunity comes an upward learning curve. He impressed us the most with determination against Jadeveon Clowney and company in the Capitol One Bowl.

Now it’s your turn. Let us know in the comments below, which running backs you’re most intrigued with for 2014.