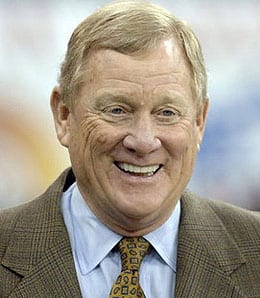 Think QBs have it easy these days? We blame Bill Polian.

While speaking with fellow football fan and RotoRob writer Andy Goldstein, we both decided that the NFL is in need of change. No, we don’t mean changing rules that give even more advantages to quarterbacks and receivers. Yes, Bill Polian, I’m pointing at you. In this new age of economic suffering and blackouts, it’s time we start to pull the proverbial plug on franchises and start moving them.

Candidates, you ask? Carolina, Jacksonville, San Diego, Tampa Bay and Seattle. Those franchises make the list because they seem to possess borderline lifeless fan bases and play in less than suitable stadium accommodations. Meanwhile, we can move either San Diego or Jacksonville to LA.

Florida in particular, is a college football state as is the whole southern region for that matter. However, we have the Dolphins and that is good enough. Jacksonville does not have a strong base and plays in a stadium that is car-equivalent of a Ford Pinto.

Prior to the beginning of the 2009 season, 17,000 Jaguar season ticket holders opted not to renew their seats and for their season opener in a 66,000-seat stadium, they had a paid attendance of 46,520. There has been talk recently of the team possibly using the Citrus Bowl in Orlando if the NFL decides to expand its schedule. Such a suggestion prompted a reporter to compare that stadium to Joan Rivers being in a Miss America competition. Ouch.

Anyways, down south, it’s college football first and professional pigskin second. Without a good product and with poor stadium accommodations, Jacksonville serves as little use in the NFL. Either move the franchise to Los Angeles or get it out of the league altogether. The same goes for San Diego, which plays in the antiseptic Qualcomm Stadium. Enough with these teams playing in bad stadiums with somewhat unenthused fans. Either get a new stadium or move on.

As for moving these teams to Los Angeles, it’s a somewhat daunting, but realistic proposition.

The first and most important concept is getting a team back to Los Angeles. I know, I know. No one cares about football in Los Angeles. That statement is false on two levels. First off, the Rams and Raiders played in two terrible buildings for football, the Los Angeles Coliseum and Anaheim Stadium. Unless the second coming of Jim Brown trotted out on the field, I would not support them either. A new stadium would solve numerous problems including:

Secondly, it’s the number two market in the country. Continuing to not support football out there is pointless. Would an LA fanbase be worse than Jacksonville, Carolina or Tampa Bay? So, don’t give me the fanbase argument. It doesn’t fly.

While we have two MLB teams, two NBA teams, and two NHL teams in Los Angeles, an NFL team is asking too much? Ultimately, it comes down to having the funds for a new stadium and finding some wonderful and extremely rich people to support…or when in doubt, just get the taxpayers to cough up the funds.

1. Ladies and gentlemen, we have identified the NFL’s unholy trinity: So, it is apparent that the three worst teams in the league are St. Louis, Kansas City, and Cleveland. Set your Fantasy lineups accordingly.

2. Tennessee’s season is in great peril: The Titans can’t defend the pass, are turning the ball over, and can’t seem to get their starting quarterback untracked. Sounds like their season is almost over to me.

3. Be careful with quarterbacks over 35: Both Kerry Collins and Kurt Warner did not exactly look themselves on Sunday. Pass rush and constant hits made them glassy eyed passers last weekend. Collins misfired on his final 13 passes on Sunday while Warner looked like he had taken more hits than Joe Frazier in the Thrilla In Manila.

4. Fred Jackson’s value is about to drop: Jackson leads the NFL with 77 touches: That is about to change, though, with the return of Marshawn Lynch from his suspension. The party is over for Jackson owners.

5. Let’s settle down on the Drew Brees for President chatter: Brees failed to throw for a touchdown versus Buffalo last week, thus quieting the claims of the Saint offense torching the NFL.

6. It seems as if firing your offensive co-ordinator before season’s start isn’t the best idea after all: Note to all NFL teams — firing your offensive co-ordinator before the start of the regular season is not the wisest move. Buffalo, Tampa Bay and Kansas City are a combined 1-8. These teams rank 17th, 25th and 30th in total offense, respectively.

7. Playing the Jet defense is bad for your quarterback’s statistical health: Matt Schaub, Tom Brady and Collins have all struggled versus Rex Ryan’s defense. As New Orleans lurks for the Jets this weekend, consider these numbers, Brees’ owners. Here are the opposing passer ratings versus the Jets:

Brees is likely to outperform these numbers, but it will not be easy.

8. Invest in handcuffs: If you haven’t done some recon on the name Glen Coffee, do so right now.

10. Dallas is a good running team, just not inside of the 10-yard line: The Cowboys lead the NFL in rushing, averaging 193 yards per game. However, without Marion Barber last week, they didn’t exactly light it up inside the 10. During a third quarter possession, Dallas ran five plays on goal to go from the 10 and it came away with field goal. Even though Tashard Choice eventually punched one into the endzone, the ‘Boys need Barber immediately.

1. Adrian Peterson (2): Another week of less than 20 carries! Cheers for preservation.

2. Drew Brees (1): Yet again, Fantasy met reality in Buffalo last Sunday. The Saints running the ball for over 200 yards is great for them, but when Brees is only throwing for under 200 yards and no scores, that is bad news for his owners.

3. Chris Johnson (3): How long before he is taking handoffs from Vince Young?

8. Frank Gore (4): An ankle injury mars what was a solid start for the former Miami Hurricane.

9. Larry Fitzgerald (8): Marcus Fitzgerald was not as active on Twitter this week during big brother’s game.

What I am about to show you is one of the many reasons why people cannot deal with the explosion of more Minnesota QB No. 4 talk. A group of Viking fans did a rap video about their new starting quarterback and ripped a few stars on other teams along the way. Just for the record, after watching this video I’m okay with the Vikings not winning another game all season.