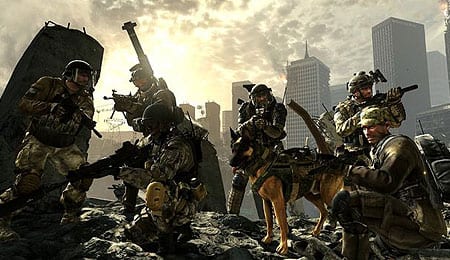 As Benjamin Franklin once wrote, “In this world nothing can be said to be certain, except death, taxes and a new Call of Duty each November.” First off, that’s pretty amazing foresight from Franklin, who wrote that roughly 200 years before video games were even invented. Second, the arrival of Ghosts, the latest release in Activision’s signature franchise, means it’s time for the vocal minority to submarine its user score on Metacritic and decry it as everything that’s wrong with gaming. It’s not, but this isn’t the series’ finest hour, either.

Tight aiming and responsive controls are hallmarks of the series, and Ghosts is no different. A pair of evasive moves have been added during sprints as you can now mantle objects by pressing jump, or slide across the ground by hitting the crouch button. They can get you out of the occasional tight situation in firefights and are welcome additions.

If there’s one area in which Call of Duty is lagging behind the competition it’s in the visual department, as you’d be hard pressed to see much improvement from Infinity Ward’s 2011 title, Modern Warfare 3, and this. Nothing looks bad per se — explosions still rip through the screen, bullets whiz all around and the environments hit all the expected notes (jungle, desert, mountains, etc.) — but I’d love to see the series take a major leap forward with next year’s game.

One positive note is that the frame rate has been cranked up to 60 frames per second, and it’s a level that is maintained from start to finish regardless of what’s happening on screen.

Unlike other recent CoD titles, which featured familiar names like Sam Worthington, Gary Oldman, Ice Cube and Idris Elba in prominent roles, Ghosts is voiced by a fairly anonymous bunch (unless you’re a big fan of the guy that played the Colonel in Avatar). They do a fine job, and there isn’t too much groan-inducing dialogue. The score is solid, highlighted by Eminem during the closing credits, and the sound effects generally pack a punch.

Set in a post-invasion America, Ghosts paints the United States as the overmatched defenders, looking to hold out against a unified South America known collectively as the “Federation.” After a short prologue that introduces us to Logan Walker (that’s you, usually), his brother Hesh, father Elias and dog Riley, San Diego is attacked by an orbital satellite before the offending station is scuttled. We’ve seen the broad strokes in other films (Red Dawn) and games (Homefront), although here I got the feeling it was more about elimination than occupation.

Keeping the majority of the action focused on Logan and Hesh helps the storyline, but with most of the plot advancement confined to narrated loading scenes it ultimately loses most of the human element it was looking for. The game narrows the scope by having your primary foil be a former Spec Ops soldier named Rorke, who carries a nasty grudge against the titular “Ghosts” unit. While this does make for a more personal conflict, it reduces the Federation to a group of faceless bullet sponges whose sole purpose seems to be getting between you and Rorke.

As with any shooter, however, the real litmus test is the action, and Ghosts delivers a decidedly longer campaign than in recent years. Despite that longevity, the single-player action walks a familiar path as you’ll encounter series staples such as the stealth mission, the flashback mission, the mission where the person you’re controlling dies, etc. There are a few standout moments along the way — the outer space stuff is pretty cool and Bondesque — and I enjoyed playing it, but it doesn’t mix up the formula to the same degree as Black Ops II, which is a bit disappointing.

On the multiplayer side, most of the core mechanics have returned intact with additional guns, perks and more locked behind level restrictions and/or the cost of squad points. What few changes have been made on this front actually muddy the excellent Pick 10 system introduced in Black Ops II. Now each perk is assigned a point value, so for instance you can equip a two-point perk with a one-perk or you can go with one worth three points. Certain attachments also cancel other loadout elements. It doesn’t require a PhD to decipher, but I would’ve preferred staying the course with the Pick 10.

Character customization is also available for the first time in the series. Only a handful of options are accessible from the start. The rest will open up as you complete the in-game challenges. It’s a potential draw for hardcore players, even though such changes are purely cosmetic.

Matches have a slightly different feel than recent years primarily for two reasons. First, aerial superiority has been toned down with a lot more ground-based kill streaks. The UAV plane has been replaced by SatComs, you can now summon a guard dog, and there simply aren’t nearly as many attack helicopters or strafing runs in a match.

Secondly, the maps are generally larger, which can lead to heightened tension (or boredom depending on your play style) as it’s not uncommon to wander around for a while without encountering an enemy. With current-gen games capped at 12 players (good bye, Ground War) it can feel a little empty.

Several new playlists have also been added, headlined by Cranked, in which upon killing someone you gain a 30-second speed boost. Fail to kill anyone during that time and you explode. Blitz is similar to CTF, except the flag spawn is a portal — reach it and you’re transported back to your base with a point credited to your team. There’s a 10-second cooldown after each score, which prevents everyone rushing the point simultaneously. Nothing revolutionary, but they’re reasonably fun to play.

Beyond the traditional multiplayer, two new modes have been introduced: Squads and Extinction. The former is basically the PvP experience except with bots. Were it not for Safeguard, a Horde-style wave defense variant, Squads wouldn’t have much going for it. Conversely, Extinction is a lot of fun.

Clearly it draws inspiration from Treyarch’s Zombies mode, but I enjoyed the focused action of Extinction much more than the obtuse weirdness that has become the norm in Zombies. Here you and your team select different skill loadouts (each with unique abilities), boost stats during games and work together to drill alien hives into submission. While I never truly got into Zombies, I could see spending some evenings with Extinction.

Forced to straddle two console generations, Call of Duty: Ghosts feels like a placeholder for the franchise with modest changes to an established formula. As long as you’re still OK with that formula, there are once again untold hours to be had between all the game’s offerings.