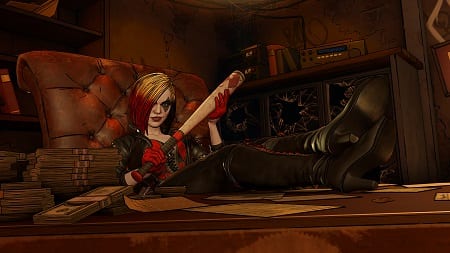 The biggest part about this stems from a conscious design choice in the episode — almost all of it takes place with you playing as Bruce rather than Batman. In fact, having Bruce put into all sorts of unorthodox and uncomfortable situations without the ability to punch his way out creates an underlying tension not often found in the series.

From there, many established roles become inverted, creating dramatic tension in ways that haven’t previously been seen in the series. In particular, the Joker (AKA, John Doe) has gone from being a pale imitation to a fresh take on the character and his relationship with Bruce.

Without spoiling anything, the most interesting thing about this episode is the way power roles and character evolution with the Rogue’s Gallery are all mixed up, creating entirely new relationship dynamics and raising the stakes by throwing Bruce in the middle of it. The result is one of the best Telltale episodes in recent memory, all leading to an ending surprise that sets up an exciting next episode.

A stellar mix of tension, character and stakes, Batman: The Enemy Within — The Pact successfully presents situations with no easy solutions and unexpected twists.