After awarding the hardware for hockey and baseball, we now switch our attention to the hardwood for the 2012 RotoRob Basketball Awards. 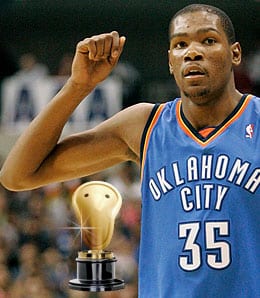 Hell, KD is so cool, he uses his RR Award as deodorant.

Can we finally give Kevin Durant his due? He was the best player in the game in 2011-12, and has continued to dominate in the first half of 2012-13, a couple of weeks ago making a major statement against the Lakers. While some believe that LeBron James has been more valuable so far this season, for our money, KD continues to be the best player in Fantasy basketball. Last season, Durant stayed healthy, became a bigger threat from beyond the arc, and enjoyed career bests in rebounds and assists. Okay, so his FT shooting has slipped the past couple of years, but he’s still among the best in the biz from the charity stripe. Oh, and he also upped his scoring last season. In the first half of this season, Durant has again been durable, and while he’s not taking as many shots – especially from downtown (although he’s been more accurate from ever there) – he’s sinking his freebies at his best rate ever and continues to be a beast on the boards. Durant’s scoring is up again, and he’s averaging a career best 1.5 steals per game. Yup, this All-Star is still improving at the age of 24, and yes, that’s a freaking scary proposition. 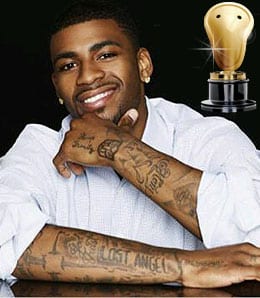 Moving back to the East has not helped Dorell Wright.

In 2010-11, Dorell Wright enjoyed a breakout season for the ages, showing an incredible single season improvement. It made him a likely third round pick in 2011-12 drafts, yet he went out and gave almost all of it back. Ugh. Wright’s PT was way down, his shooting touch from outside slipped and his rebounding numbers dropped. He averaged half a steal per game less. Yuck! And now that he’s in Philly this season? Nope. Wright’s descent has continued as he’s struggling to sink his shots and is turning it over more despite less action. Hell, now he’s even having his shoe tossed into the crowd. 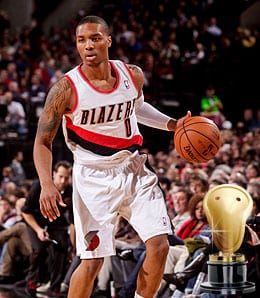 There were some really impressive rookie efforts last season (notably Kyrie Irving and Ricky Rubio) and what Anthony Davis has done so far this season (when healthy) is quite impressive, but no freshman in 2012 has blown us away like Portland point guard Damian Lillard. We expressed our amazement at what he’s done just last week and the fact that he’s become a leader in Portland so quickly is a big reason why. Back-to-back Western Conference Rookie of the Month awards suggests that we’re not alone in our praise. There may be a couple of teams that had wished they had grabbed Lillard by the time all is said and done. 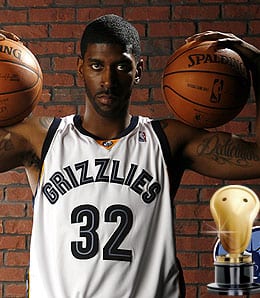 O.J. Mayo’s recovery began in Memphis, but has really picked up steam in Dallas.

A couple of oldtimers have looked revitalized of late (Kobe Bryant and Tim Duncan) but relative youngster O.J. Mayo’s recovery – especially this season – takes the cake here. Last season, Mayo came off the bench exclusively for the first time in his career, yet it suited him as his rebounding work bounced back a bit. This season, his first in Big D, has been a serious breakthrough as he’s getting tons of PT as a starter, is doing an even better job on the glass and is enjoying his best scoring season ever. We expected him to the 19th best in our Shooting Guard Rankings, but he’s been a top six player at the position. Suddenly, Mayo is Dallas’ top option (thanks to Dirk Nowitzki’s injury). 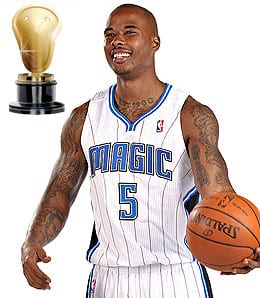 Q-Rich was heating up for the Magic.

At the very beginning of 2012, Orlando Magic swingman Quentin Richardson suffered one of those legendary injuries that deserves a Golden Athletic Supporter. Q-Rich was putting some Icy Hot on his ankle to relieve pain… nothing wrong with that. However, he then put his foot into cold water, causing a chemical burn. Product directions? What product directions? Is Richardson a future Darwin Award winner?

Landing on his Feet Award 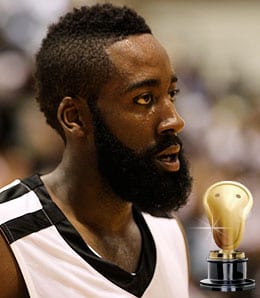 Could James Harden hide his Golden Athletic Supporter in his beard?

Wow, talk about making lemonade from lemons. Just a few days before the season began, James Harden was in a contract dispute with the OKC Thunder. The reigning Sixth Man of the Year was about to begin the final season of his rookie contract, meaning he was eligible for an extension of a maximum of four years, $60 million. The Thunder offered around $52 million, but Harden turned it down, starting a spiral of events that saw him dealt to Houston. Going from the Western Conference Champions to a lottery team? Sounds like a raw deal, right? Instead, Harden becomes an instant star in Houston, ranking fifth in the NBA in scoring and turning the Rockets back into a serious playoff contender. Oh, and the Rockets gave him a five-year, $80 million deal. Yup, that turned out pretty sweet for the bearded wonder. 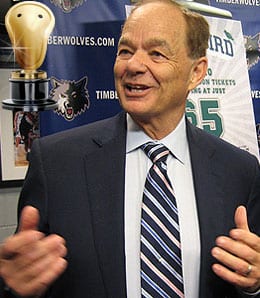 Not only do Minnesota civil rights leaders believe the Timberwolves are too white, they think the team is doing this by design. “How did we get to a roster that resembles the 1955 Lakers?” Tyrone Terrell, chairman of the Twin Cities’ African American Leadership Council, wondered. “I think everything is a strategy. Nothing happens by happenstance,” he added, leaving little doubt about his accusations about the makeup of Minny’s lineup. The vast majority of NBA players (78 per cent) are black, yet 10 of 15 players on the T-Wolves are white. “I think, personally, that was calculated. Is this an attempt to get fans back in the stands?” former head of the Minneapolis Civil Rights Commission Ron Edwards asked. “Minnesota, after all, is a pretty white state.” Could team owner Glen Taylor really be trying to change the Timberwolves into the Timberwhites, or is this simply a bizarre coincidence? 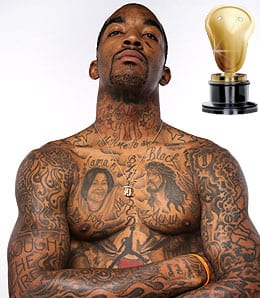 It’s hard to believe this dude would ever do anything douchy.

J.R. Smith had a hell of a year in 2012. He opted to go play in China during the lockout, but couldn’t get out of his contract, so was unable to return to the NBA until March. He struggled at times when he came back and lived up to his billing as a clubhouse cancer, often not joining team huddles during timeouts. But then Smith proved what a douchebag he was off the field, tapping into his inner porn king by tweeting a picture of model Tahiry Jose’s booty (which is pretty freaking huge, btw). Smith also posted a pic of himself wearing a Fuck You hat. Meanwhile, the dude has built on a solid first season in NY and is enjoying a career year so far in 2012-13. Hey, when you’re a dickweed, the world is your oyster.

Fireman of the Year 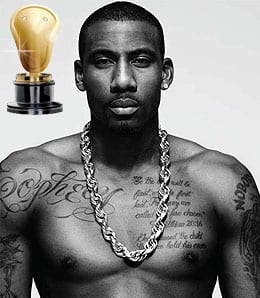 Amare Stoudemire needs to extinguish his own fire.

After a nice first season with the Knicks, Amare Stoudemire’s tenure in New York has turned into a shit show. And during the 2012 playoffs, his frustration came to a head as he tapped into his inner fireman and punched the glass enclosure of a fire extinguisher. This season has been a nightmare as well as he just came back from a knee injury that had cost him the entire campaign, but his role is unclear at this point and he’s come off the bench in his first two games back. Stat’s a fiery dude, and you’ve got to believe he’ll be burning up inside if he keeps playing such a minimal role on this team.

I know the pain inflicted by Roy on Fantasy teams last season as well as anyone, having spent my second round pick on a player I expected to anchor my scoring and contribute in several categories. Um, it didn’t work out that as Roy’s knees sidelined him on multiple occasions, finally forcing most owners to cut bait. It’s a shame that this once-promising star’s career was cut short, but at least he had the decency to retire before my draft this season.