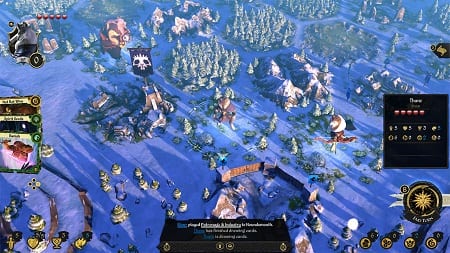 Armello is difficult to read in tabletop mode.

Armello originally made landfall on PCs and the PlayStation 4 back in 2015, eventually spreading to the Xbox One and iOS before finally reaching the Nintendo Switch last month. It brings the strategy of a board game with the politics and backstabbing of a medieval drama, but with fluffy, anthropomorphic forest creature. The pieces are on the board, so who will emerge as the next King of Armello?

If you’re accustomed to turn-based strategy games such as Civilization, the overall control scheme is similar. You pan across a board-like map in which all characters take turns across a smooth integration of actions. While awaiting your turn you can view the encompassing board and plan out your strategy or sadistic trap for your victims.

In a recurring theme when played on the Switch’s portable screen, it can be difficult to see the input commands, particularly from your cards tucked off to one side. Eventually you’ll learn how implement your strategy, but early on it can be a little grating. Of course, since there’s rarely any need for quick action it’s more a quality of life issue than anything more substantive.

Although light on animations, there’s clearly a level of visual prowess in the game’s light-hearted art style mixed with that of a darker narrative. The board game ambiance and usage of cards are also nice touches in your efforts to conquer the kingdom as this provides a level of strategic depth rarely found elsewhere. The orchestral soundtrack is also naturally fitting and appropriate to long games of this genre.

As noted above, there are persistent issues with font size on the portable screen. While those become a non-factor related to gameplay, it’s a constant struggle to read things like card effects and narrative info when presented in conjunction with the busy UI. Obviously we’re viewing a scaled down version and not something built for the smaller screen, but it’d be nice if an option was added to magnify the lettering.

Armello‘s overarching goal is to banish the mad king and claim the throne for your chosen faction: wolf, rabbit, bear or rat clans. While mainly there for aesthetic intrigue and narrative, the factions do provide starting bonuses that affect how you may try to claim the throne. Said conditions are through prestige, rot, might and collecting spirit stones. Each is a viable path, but certain heroes will be more adept at one or another.

Each player controls a single hero and vies for one of the winning conditions. Prestige is the political route and is accumulated through completing deeds that provide recognition of the King and gives you the right to choose the next set of laws to be enacted. This can be used as subterfuge to hinder other players.

Rot is the path of corruption and madness. By doing evil deeds or losing to evil creatures, you’ll gain rot that could potentially surpass the King’s. Meanwhile, collecting four spirit stones affords you the power to cleanse the rot. Lastly, might is the straightforward path as you gather strength to fight the King in one-on-one combat.

Armello takes place on a randomly generated game board with up to four players — though the randomness will mainly be the placement of relevant tiles such as towns, forests, mountains, and so on. Turns are set during day and night, and it’ll visually affect the board and events that unfold during those times.

Tiles on which your hero moves will provide advantages to your overall resources. Claiming a town will generate gold each dawn, while visiting a dungeon will provide you with a random amount of resources or awaken a Bane raven during the dusk. All these will help you use the cards that you draw every time it’s your turn.

What makes Armello unique in the digital space is its loyalty to a board game experience. The most noticeable feature is the cards that serve as the means to thwart your competition. You’ll choose from three different types of cards: equipment, magic and trickery.

Equipment cards are buffs that affect your battle stats during one-on-one confrontations. Magic can do a number of items from buffs to damage to manipulating a variety of things. Lastly, trickery provides ways to slow opponents down by laying traps that disable their resources or ability to conduct a normal turn.

Quests are also available and can be chosen at the start of the game and subsequently after each completed quest. Completing it will award the player with permanent stat bonuses, magical items or even followers for hire. Followers act like the cards you draw, but they need to be hired with gold to provide their corresponding buff. While questing may help improve your hero, the player must always beware of their opponents laying in wait to stop them.

The last major feature of Armello is battle mode. Each battle is conducted through a one-on-one challenge via a dice roll. The number of dice available depends on your stats, but the general idea is to roll to buff either your attack or defense.

If your attack is greater than the enemy’s defense, damage will go through to the opponent’s health points. Additionally, you can burn cards in your hand to get a desired effect like increasing your defense. The battle ends with characters taking damage. If lethal damage is accumulated, that character returns to its starting location.

Online multiplayer is also available, though the game doesn’t support cross-platform play, and we found the community to be rather sparse. The Switch version also seems to struggle with noticeably lengthy load times, which is odd given its simple graphics and the fact it’s been available elsewhere for years.

Armello is a bit of an undertaking, moving methodically as you work to grasp the intricate gameplay and layers of strategic depth. For those that can handle the pacing there’s a unique and interesting experience waiting to be discovered.