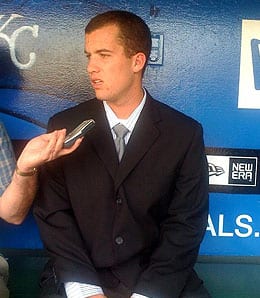 Danny Duffy was a fine conversationalist, but his pitching left something to be desired.

The mysteriously missing Tim has resurfaced after wandering in the desert for days, tripping on mescaline, and files this report from sunny Arizona, home of the aptly-named Arizona Fall League.

Arizona — It’s time to check in with some random observations from Arizona. Yes, the weather was awesome — if you can call daily temperatures in the mid-80s without a cloud in the sky awesome — but really after we get through the depression of being forced to endure such challenging weather conditions, there was some baseball to be watched. I managed to attend five games during the week before finally heading off to Sin City for some rest and relaxation (is that an oxymoron?).

Last week, I had the opportunity to chat with Royals’ pitching prospect Danny Duffy. He was charting pitches right behind where we were sitting and I thoroughly enjoyed the great conversation I had with the young southpaw. Whatever it was that was the cause for him to evaluate his life priorities at the beginning of the 2010 seems to be far behind him now. His enthusiasm when discussing the great group of young Royals chomping at the bit was very obvious. I wish Duffy all the best in his journey to the big leagues.

The 2010 AFL is about man child Bryce Harper, so let’s start by assessing the young Washington Nationals’ phenom. The kid is obviously a very talented individual and his athleticism is nothing short of amazing. In my first look at Harper, I witnessed a strikeout on three consecutive pitches, followed up in his second at-bat by a perfectly executed drag bunt down the third base line. Not exactly what the paying masses were anticipating — but it got him to first where he eventually scored the tying run. Harper flashed a serious cannon of an arm, knocking down a fly ball at the wall and hit third base on the fly.

He’s 18 years old and is definitely going to need some tutoring, but how many kids that age don’t? If Harper can harness his amazing athleticism he has the potential to be an incredible baseball player. He doesn’t look out of place here and one must remember he’s playing against much more experienced prospects that for the most part are three or four years his senior.

You certainly can’t question Harper’s effort, as evidenced by his attempt to run over the catcher in the first game I saw, or his hard slide into second base to break up a double play in the second game I witnessed. The hit batter in the next inning that resulted in a warning — something that rarely occurs in the AFL — might have been as a direct result of Harper’s overly hard play. The kid is definitely not here as a spectator.

Now, from a Fantasy perspective, where does Harper fit into the grand scheme of things? He simply has to be owned in dynasty formats. The consensus here is that he’ll get a cup of coffee in September 2012 and a spot on the big league roster heading in 2013. There are no guarantees in this crazy game, but when you hear Harper’s name being mentioned in the same sentence as Josh Hamilton it does bode well for the kid’s chances.

Eric Hosmer — as RotoRob discussed last week — is finding his stock to be soaring. He’s a big kid and is definitely all of the 6’4”, 215 pounds as listed in the program. He is the real deal and even though he’s been struggling with the stick this fall, his strike zone judgment impressed me. Hosmer definitely gets a mulligan for his AFL woes. Now all the Royals have to do is sort out the three-headed monster that is Billy Butler, Kila Ka’aihue and Hosmer.

Josh Collmentor of the Diamondbacks totally redefines the phrase over the top. He owns a plus change up and with his unique delivery, he’s going to keep hitters off balance. I guess my question is for how long?

Giants’ prospect Brandon Belt impressed me, but the issue here is how much playing time opportunity will he get? Do the Giants re-sign Aubrey Huff as reports suggest they will? If so, does it really matter how well Belt is playing? He has the potential to break camp as a regular in 2011 depending, of course, on whether Huff is retained.

First baseman/outfielder Leslie Anderson was somewhat of a disappointment, but did manage to slug the homer that won the All-Star game on Saturday night. The Rays are going into retooling mode for 2011 and the 28-year-old former member of the Cuban National team could be the short-term beneficiary in this scenario.

Minnesota Twins outfielder Ben Revere looked great. The kid can fly and made an outstanding catch at the wall in the All Star game, receiving a standing ovation for his efforts. If the goal for Revere coming to the AFL was to work on his defence, it was a success. The nine thefts he’s accumulated this fall is also very impressive and although the playing time opportunities might be tough to come by early on in 2011, he’s definitely ready.

Milwaukee prospect Jeremy Jeffress’s well-documented substance abuse problems aside, we saw at the end of the season that this kid has some serious potential. And when he hit 101 mph on the gun Saturday evening, it certainly satisfied the masses.

Yankee prospect Brandon Laird is in the process of being converted from third base into an outfielder and he looked lost. He was all over the place this week and I saw very little resemblance to the player that produced 23 homers and 90 RBI at Double-A Trenton in 2010. Maybe the 27 strikeouts against just four walks at Triple-A are telling a bit more of the story for this 23-year-old. Thus far in the AFL, Laird is hitting just .234 with 18 strikeouts in only 77 at-bats. I wouldn’t be at all surprised to see the Yankees shopping this kid down the road.

Another Yankee farmhand, Manny Banuelos, looks very legit, but is there a southpaw that I don’t like? All you need to do is consider that as a 19-year-old he struck out 17 in 15 1/3 IP at Double-A Trenton. How many kids that age have shown that skill set at the Double-A level?

Kansas pitching prospect Mike Montgomery, a 6’5”, 21-year-old southpaw, started the All-Star game and was impressive. He has the potential to be a dominating force if he can stay healthy. The 11 strikeouts in 10 1/3 IP this fall is a solid indicator that Montgomery has moved past the elbow soreness that surfaced twice during the 2010 campaign.

Our new friend Duffy got absolutely hammered in his brief outing last Thursday. The 21-year-old didn’t make it out of the second inning, allowing six hits and two walks and finally being yanked after plunking a batter. It was far from a solid outing, but I’m giving Duffy a mulligan because his 41 strikeouts in 39 2/3 IP at Double-A Northwest Arkansas speak volumes for his potential. The Royals are absolutely loaded at the minor league level with Mike Moustakas, Montgomery, Duffy and Hosmer all on the fast track to the bigs. There is definitely reason for hope for those long-suffering fans in the Midwest.

Dodger prospect Trayvon Robinson has the wheels to cover a lot of ground in centrefield and steal a base or two. The speed is very real and if he can sustain that .404 OBP and 38 thefts he amassed at Double-A Chattanooga in 2010, we might get a chance to see his skill set in the second half of the 2011 campaign.

Unfortunately we didn’t get the opportunity to see Freddie Freeman of the Braves, as he left early with a sprained left thumb. All indications are that he’ll be joining Jason Heyward in a very young and talented Braves’ lineup for 2011.

Jared Mitchell is clearly still rehabbing and doesn’t look to be over the effects of the torn tendon he suffered in the preseason. His speed potential is clearly not there yet, but let’s hope he continues to progress in his rehab and regains his status as the White Sox’s top prospect.

We also got to watch a change on the umpiring side of things. Checked swings were being called behind the batter. Obviously this is a trial program, but using the first base ump to rule on check swings by left handed batters and vice versa does appear to be a bit confusing. I didn’t completely feel comfortable with that one, but there has to be some method to the madness. Or not.

In summing up my four days in the desert, it was an experience that won’t soon be forgotten. Between rushing to the park, attending seminars, and catching some of the brightest young stars in the game, the word hectic has to enter into the equation. Meeting so many old friends that I’ve never actually had the chance of interacting with in person was a true pleasure. If you’re interested in seeing some of the greatest young stars in the game a trip to the desert in November is a must.