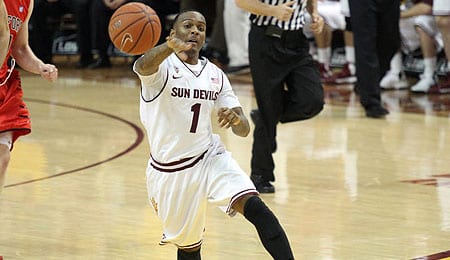 Jahii Carson is expected to be a second-round pick in this year’s NBA draft. (Thesundevils.com)

It’s high time we checked in on the wonderful world of college basketball with March Madness just weeks away and major story lines forming across the country as we lead up to sport’s most exciting tournament.

Today we’re going to touch on a few highlights from an exciting weekend of college hoops action. As always, for the latest info, check the NCAA basketball lines.

A couple of weeks ago, the Arizona State Sun Devils were off the radar in terms of a spot in the tourney, but after beating arch-rival Arizona on Friday, they’ve now won six of their past seven to build their case for a bid. ASU point guard Jahii Carson — a projected mid-second round pick in this year’s NBA draft — had a breakaway dunk to ice the game in double overtime. The durable guard shook off a poor shooting effort in his last game to score 17 points with six dimes. At times on Friday, Carson was as much lucky as he was good (check out the video below to see the prayer shot he tossed up midway through the second half).

The Florida Gators continue to impress, walking into Kentucky Saturday and battling from behind to earn a 69-59 win for their 17th straight victory. Senior guard Scottie Wilbekin came up huge for the Gators, scoring a career-high 23 points and hitting 11-of-12 from the charity stripe, including five massive freebies in the dying moments to keep Florida unbeaten since early December. He was suspended to begin the season, but since his return has done a much better job of generating points from the free throw line.

Nebraska took out No. 9 Michigan State 60-51 on Saturday to reach the .500 mark in conference play for the first time since it joined the Big Ten. As usual, the Cornhuskers were led by projected late-first rounder Terran Petteway (23 points), but sophomore guard Shavon Shields pitched in with a surprising eight boards while adding seven points, two assists, a steal and no turnovers. Shields was 0-for-4 from beyond the arc, but he’s already sunk more treys this season than he did as a freshman.

Speaking of upsets, how about No. 18 Creighton hammering No. 6 Villanova 101-80 on Sunday? The Bluejays have now bunny hopped the Wildcats to take over first place in the Big East. Creighton senior forward Doug McDermott — a projected lottery pick — continued to put up big numbers as he has his entire career. He matched his season-best with 39 points — enough to pass the legendary Larry Bird for 13th place in all-time Division I scoring. McDermott needs only nine points in his next outing to match Tyler Hansbrough for 12th place all-time.

Well, that’s a wrap for now, Keep checking this space for updates as we head towards the Final Four.

Now it’s your turn. Let us know in the comments below which performances in the NCAA caught your eye this weekend.
Save $1 on The 2014 Fantasy Baseball Guide