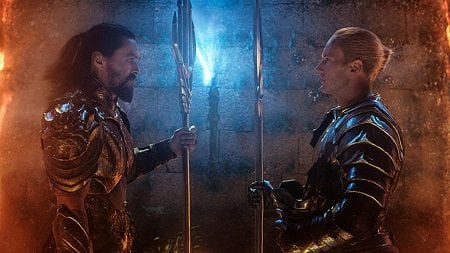 It’s been a bumpy ride for DC’s extended universe with Ben Affleck done as Batman and plenty of rumours about Henry Cavill‘s status as Superman — and that’s just since 2017’s Justice League brought DC’s superhero team together. That film also served as the functional introduction of Jason Momoa as Aquaman, though he took a back seat to Affleck, Cavill and Gal Gadot as Wonder Woman. Now in the featured role, Momoa will try to breathe life into Aquaman.

After a short sequence showing the origins of Arthur Curry (Momoa), the son of a lighthouse keeper and Atlanna (Nicole Kidman), the queen of Atlantis, we’re brought into the present (approximately a year after the events of Justice League). Here we find Aquaman filling the role of reluctant hero, thwarting pirates attempting to hijack a Russian submarine but earning the wrath of their leader, Black Manta (Yahya Abdul-Mateen II), in the process.

Shortly after returning to land he’s approached by Mera (Amber Heard), an Atlantean Princess, who urges Arthur to return to his home and confront Orm (Patrick Wilson), his half brother with designs on going to war with the surface. While Arthur initially laughs off her advice, he decides to take things more seriously when a massive tidal wave sent by Orm nearly drowns his father (Temeura Morrison).

When Arthur arrives in Atlantis he almost immediately challenges Orm, much to the dismay of Mera and Vulko (Willem Dafoe), a longtime confidant of Orm who angles to put Arthur on the throne. Nearing defeat in single combat, Arthur is whisked away by Mera, and the two must now locate and acquire the Trident of Atlan before Orm can unite all the ocean clans and make his war on humanity.

Momoa may have been an unconventional choice given the comic-book character, but he excels in the role. After being consigned to the background for most of Justice League, Momoa brings an infectious energy to the film. The combination of his physical size and lighthearted attitude make him likable in the same way as Dwayne Johnson, and there’s no question he has what it takes to be a leading man in action movies going forward.

Aquaman continues to take the DC films in a less serious direction. Yes, there are still serious elements and themes, but it never gets overly dark and brooding the way Dawn of Justice did, and that’s a good thing for a series that has been short on fun. And at the end of the day, that’s what Aquaman delivers. Maybe it’s not Thor Ragnarok levels of fun, but it’s certainly fun nonetheless.

There’s a ton of action here and, outside of those moments when it can get a bit dizzying with the “camera” movement, it’s enjoyable. Whether it’s the large-scale battles or one of the several one-on-one fights with Aquaman they’re easy to enjoy. Aquaman also features some really clever world design, which goes a long way in rebuilding a superhero brand that was the butt of jokes for a long time.

We have mixed feelings about the CGI. Obviously you couldn’t create an underwater film like this without it, but it’s so prevalent for such lengthy stretches of time that it can almost feel as though you’ve switched movies when things are on land and CGI is used to augment the otherwise real sets. Ultimately, the underwater sequences don’t feel real, so if you like realism in your superhero films this is unlikely to deliver.

There isn’t a lot of storyline to dig into. Aquaman plays the reluctant hero we’ve seen a million times. His relationship with Mera is straightforward and flirty, bypassing the obvious (and literal) “fish out of water” elements that could’ve been played up outside of a few brief moments. It all makes for lots of sizzle and precious little steak.

There are lots of extras available, though they’re pretty much all behind the scenes stuff with one looking at Momoa, another at creating the world, another featuring the main two female characters and so on. It’s more interesting than many simply because the film represents a major departure from the comic, but only the most devoted fans are likely to invest more than an hour on them. There are no deleted scenes.

While there are some tonal inconsistencies and a shallow story, Aquaman still manages to provide a fun ride thanks to Momoa’s performance and loads of action.