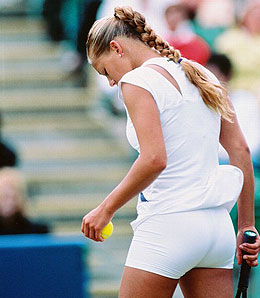 I’d know that ass anywhere. That would be Anna Kournikova’s sweet booty, aka, the bane of Sergei Federov’s hockey talent.

Oh jeez, give it a rest, girl! In the latest issue of US Weekly, Michael Starr, a close friend of Tony Romo, talking about the Cowboy and Jessica Simpson, told the bird-cage liner pub “I think they’re getting married.”

This is just another press stunt by Simpson, who, according to OK! “always leaks information about her faux love life when she`s desperate to get her face on magazine covers!”

Damn. I tried the same thing recently, telling a friend that I was getting married to Penelope Cruz, yet I didn’t even wind up on the cover of my company newsletter after dropping that bombshell!

Word is that Jessica is trying to get the media to focus on anything besides her lame-ass country album. OK! contacted Simpson’s representative to find out if it should buy them a wedding gift, and she wouldn’t deny the story or even try to play it down.

This is straight out of the Cowboys’ play book. It’s called a ‘play action fake,’ for the football-challenged among you.

By the way, Jessica is apparently headed to Kuwait to entertain American troops.

Watch out for friendly fire, honey!

Sheryl Crow’s sixth studio album, Detours, is now out and it includes a song inspired by her public break-up from former fiance, cyclist Lance Armstrong. In the song “Diamond Ring,” she sings: “Diamonds may be sweet, But to me, They just bring on Cold feet.”

Cold feet? Could be. Or maybe Armstrong finally did some math and realized he was about to marry a cougar almost 10 years older than him. Or maybe he just thinks watching Matthew McConaughey’s ass on a bike is a better training technique.

In 2002-03, the final season that hockey star Sergei Fedorov was still married (if in fact he ever was) to tennis hottie Anna Kournikova, he averaged 1.04 points per game. In the five seasons since then, he’s managed just 0.66 points per game.

Sure, he may simply be getting old, but maybe he never got over losing her. I mean, come on. Could you get over her? Of course, the possibility of me winding up with Anna is just about as likely as her ever winning a professional tournament. So there’s hope, right?