Minor Matters: Angel not done yet 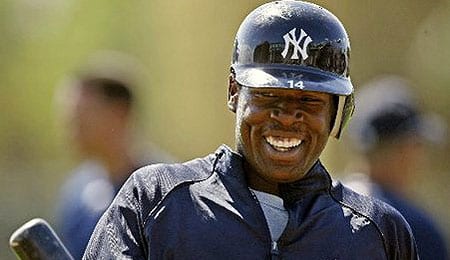 Angel Berroa wasn’t smiling when he failed to make the Yanks, but he’s gone to the minors and hit the cover off the ball. (Kathy Willens/Associated Press)

Angel Berroa, who just missed the cut in his efforts to secure a reserve infielder job on the Yankees this spring, has gone down to Triple-A and done his best to prove he still belongs in the majors. The 31-year-old veteran of 711 big league games looked to be on his way out as far back as when the 2006 season ground to a halt, and when he didn’t even make the Royals out of Spring Training last year, it was clear his days in the organization were numbered. To his credit, Berroa hit well at Triple-A (.291, 10 homers, four steals in 51 games) before a mid-season deal sent him to the Dodgers and back to the Show. He was decent as a backup in LA, hitting .230 with 20 walks and showing a tiny bit of extra-base pop. But the Dodgers didn’t want him back, so he signed a minor league deal with the Yanks. And he’s been raking for their Triple-A squad. While he cooled off Sunday (0-for-3 but with an RBI), in his two previous games, Berroa had gone 6-for-7 with two runs, a double, two homers, five RBI and two walks. Through 11 games at Scranton-Wilkes/Barre, he’s batting a robust .356 with six runs, 11 RBI and four walks. Should an injury or continued ineffectiveness of utility men Ramiro Pena and Cody Ransom necessitate it, Berroa looks hungry to contribute at the big league level again. Of course, it would take an injury to Derek Jeter or Robinson Cano for Berroa to have a chance at any fantasy value.

By the way, in case you hadn’t noticed, the Scranton-Wilkes/Barre Yankees, who won the Governors’ Cup last season, look like the team to beat again this year. They’ve won their first 11 games of the season – the longest winning streak in franchise history. Hey, at least the Yankees’ Triple-A team is playing championship ball. They lead the International League in batting average, home runs and runs scored. How sick is this offense? Just twice have they scored less than five runs. In eight of their 11, they have six or more runs; six times they’ve put up seven runs or more; they’ve counted at least eight runs five times, and four times, they’ve put up 11 or more. Here’s a tip: if you’re in a Triple-A fantasy pool, keep any starting pitchers who have a date against these guys on the bench.

Phil Hughes has anchored the Scranton rotation, and he looked very impressive on Friday, hurling 5 2/3 shutout frames, giving up just five hits and fanning six without a walk. With wins in both his starts, it’s been a very promising start to the season for Hughes, who is still just 22 – something we forget as injuries and ineffectiveness have caused false starts the past two seasons. And as Tim pointed out Sunday, with Chien-Ming Wang getting molested like a $5 whore, Hughes may get a return call to the Show very soon indeed. After he struggled with his control in the majors and was even hit hard at Triple-A in 2008, the Yanks may have been regretting not parting with Hughes as part of the package that could have landed them Johan Santana prior to the season. But if he keeps up the early-season success he’s shown with his fastball/cutter combination, Hughes may yet develop into the front-line starter everyone expected.

I was pleased to see the New York Yankees have called up reliever Steven Jackson, a pitcher who caught my eye last season when he enjoyed very nice success at Triple-A. The 27-year-old righty will be making his big league debut, and although he’s been a bit too hittable in the early going at Scranton, his bottom line results (2.84 ERA) deserved a reward. Jackson broke through in 2006, when he was a starter in the D-Back system, after fixing his mechanics and putting himself on the radar as a prospect. Unfortunately, he got off track a bit in 2007, when the Yanks converted him to a reliever, before bouncing back last season.

While Jackson deserved the call, I’m a bit surprised the Yankees didn’t send for veteran Brett Tomko, who turned 36 earlier this month and has won 95 big league games. The way he’s pitching at Scranton right now, he can definitely help the parent club’s bullpen. He was so rancid in KC last season, that we were wondering when the Royals would cut bait. Thankfully, they did just that a couple of weeks afterwards. Tomko landed in San Diego, but got hurt after just two appearances. He came back and pitched extremely well in August and was rewarded by being released at the end of the month. The Yanks penned him to a minor league deal and he pitched extremely well this spring. His reward? A trip to Triple-A. To his credit, Tomko has sucked it up and pitched brilliantly, going 1-0, 0.00 through five games. He’s saved a pair, and has given up just five hits and a walk in 7 1/3 innings while whiffing eight. Tomko has been especially nasty against righties.

Finally, there’s one other minor league reliever who deserves another chance at the majors – Sean Henn. The former Yankee prospect was hurt at the start of the 2008 season and was DFAed, getting snagged by the Padres in May. Predictably, he was shelled in San Diego, thanks to his typically awful command, so the Padres outrighted him in June. In fact, Henn was ripped in his major league debut, and it’s never really stopped since. So why do I think this lefty, who will be 28 later this week, will be back in the bigs soon? I’m glad you asked. Signed by the Twins to a minor league deal in January, Henn was reassigned to the minors in late March, but he’s pitching very well at Triple-A Rochester. Friday, he was absolutely dominant, tossing two shutout innings in which he gave up just one hit and one walk, striking out five. For the year, he’s 0-0 with a 1.35 ERA through 6 2/3 IP. He’s allowed four hits and five walks (there’s that control issue again), but he’s struck out 10. Meanwhile, up on the Twins, the bullpen (other than Joe Nathan, naturally) is a mess. Jesse Crain is struggling with his control; Matt Guerrier is getting hit hard; Luis Ayala is getting shelled; Craig Breslow can’t throw strikes and Philip Humber was so rancid that he was DFAed on the weekend. That sounds like a land of opportunity to me.