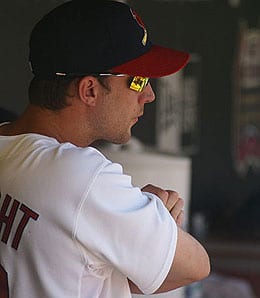 Adam Wainwright is one of the few starters that can hold a candle to what Josh Johnson has done this season.

When we last checked in on Andy Pettitte nearly two months ago, we were wondering whether the now 38-year-old southpaw had discovered the Fountain of Youth. Well, he’s still enjoying his finest season in years, but after getting roughed up by the Dodgers this week, a distinct trend has emerged. Pettitte went 3-0, 2.12 in April, 4-1, 2.87 in May and 2-1, 3.18 in June.

Certainly there’s no immediate reason for his owners to panic – I mean, the dude has 11 quality starts in 15 tries — but it’s a situation worth noting for those thinking of selling high on the veteran hurler. You might want to wait until after Pettitte’s next start Saturday in Toronto. While the Jays have had a solid offense this year – especially at home, they are the coldest hitting team in the AL over the last week and rank dead last in OPS against lefties this season.

On the other hand, I wouldn’t dare think of moving Josh Johnson if I owned him. We really liked him early in the season, projected him as a top 15 starter, but what he has done so far this season is vastly beyond anyone’s wildest expectations. Other than Ubaldo Jimenez, and perhaps Adam Wainwright, no starting pitcher has been better than Johnson in what is turning out to the be the Year of the Starter.

Johnson took the hard-luck loss Saturday when he yielded all of two runs and five hits in eight innings. Two runs? What a freaking stiff, eh? Before that implosion, Johnson had gone eight straight starts without giving up more than one run. Uh, just think about that for a moment. Through 16 starts, he has 14 quality outings, his ERA is well under 2.00 and you need a Hubbell Telescope to see his WHIP (0.96). As great as Johnson was in May (3-1, 1.38), he’s somehow been even better in June (3-1, 1.18).

At the age of 26, who knows how good this guy can be? What I find most encouraging is that since 2007, he has improved his P/IP every season, meaning he’s becoming more and more efficient on the mound. But what’s even more amazing is that he’s done that at the same time as he’s raised his K/9 in each of the last two seasons. That’s a really hard thing to do, serving to underscore just how dominant a hurler Johnson has become.

Finally, with Jacoby Ellsbury still ailing and now Dustin Pedroia out, forcing Bill Hall in from the outfield to second base, everyone knows Boston is hurting for outfielders. The name that keeps popping up is that of KC’s David DeJesus, enjoying a career year for the sad-sack Royals. There are several other teams supposedly interested in the left-handed hitting DeJesus, including Washington, Atlanta (although the word is, the Braves want a right-handed hitter), Cincy and San Diego (although adding payroll would be surprising there) as well as Boston.

But apparently, because of the Allard Baird connection (he’s now in the front office of Boston, but once upon a time was the GM of the Royals when DeJesus broke in to the Show), the Red Sox have a distinct advantage. However, is the asking price too high? KC wants a major league ready player and a top prospect for a player that is outperforming his norm by a fairly significant margin. From a purely Fantasy standpoint, owners are starting to finally jump on the DeJesus bangwagon, and we should give him a bit of love, too, considering we only ranked him as the 86th-best outfielder heading into the season, but he’s performed at or near top 40 levels.

The problem remains, however, that we’re more or less talking about empty BA here. DeJesus is hitting the cover of the ball, batting .410 this month to take his season average up to .331, but other than a decent amount of runs and a few ribbies, he doesn’t bring much to the table. He doesn’t hit for power the way most outfielders tend to, and he doesn’t compensate for this lack of pop with much speed. But hey, if you need to boost your team BA, he’s your man, and on the optimistic side, you’ve got to figure that DeJesus should see a bump in runs and perhaps ribbies once he’s dealt to a better lineup.