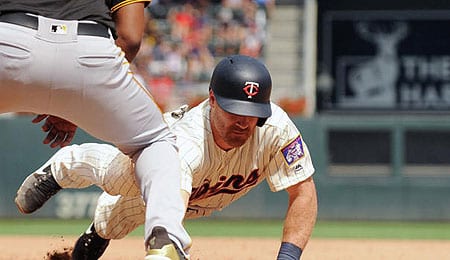 Logan Forsythe has been a different player since coming to Minny. (Marilyn Indahl/USA Today Sports)

Welcome back to another week of Fantasy baseball. With September upon us, many of you will soon be into your league playoffs. Keep working that wire to take you over the top, peeps!

This week, Milwaukee made a move to beef up its rotation by acquiring Gio Gonzalez from the Nats; the Yankees also made a splash, trading for Andrew McCutchen despite the fact Aaron Judge (wrist) is due back before the end of the season; and the Dodgers improved their bullpen by landing Ryan Madson from Washington, a team which clearly went into sell mode.

Logan Forsythe, 2B, Minnesota Twins (ESPN: 2.2 per cent; CBS: 6 per cent): Forsythe seems like a different player since arriving in Minnesota at the end of July in the Brian Dozier trade. While he’s cooled off recently (taking a periodic seat as a result), he was hitting .377 through his first three weeks and change with the Twins and he’s still getting on base, drawing four walks over the last three games. Forsythe was worth spending a bit of FAAB on last week, and we’re still buying for the home stretch. With the Dodgers, he had never hit worse, but in a fraction of the time since the trade, he’s almost matched his counting cat numbers. Known as a glove first player, Forsythe has also had some decent seasons with the lumber recently (see 2015 and 2016, for instance), so he could be a nice asset in an AL-only league for your stretch run. He’s certainly no stranger to finding his way on a new team (see video below).

Dellin Betances, RP, New York Yankees (ESPN: 39.3 per cent; CBS: 49 per cent): With Aroldis Chapman out, the Yanks have employed a few different options for saves, but Betances is the one we want, despite a blown save on Thursday. In his two previous outings, Betances earned a win and a save and before Thursday, he had gone over two weeks since last being scored on. Going back further, he’s been on a roll since the end of May, posting a 0.00 ERA in June and 0.90 mark in July. Generally, Betances has been very reliable this season, and — as per usual — he’s been a workhorse. There are concerns about his ability to handle the ninth inning (33 career saves, 18 blown), but he’s on the cusp of a fifth straight 100-K season, making him a useful asset whether he’s earning saves or not.

More CanCon today as we pick a classic from Canadian rockers Streetheart, who had a string of national hits in the late-’70s and early-’80s. From its 1978 debut album, Meanwhile Back in Paris, comes “Can You Feel it,” a tune that takes me back to my formative years.