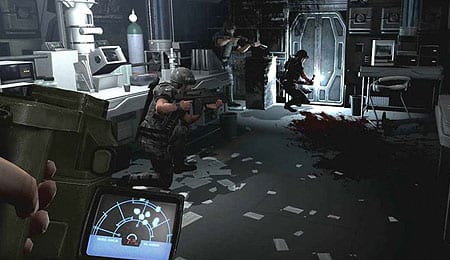 Then they’re RIGHT ON US!!

As I’ve noted many times over the years, I am a huge fan of the Aliens franchise, specifically the first two films, which both hold up quite well outside of a few brutal special effects sequences. So to say that my anticipation level was at a fever pitch for the oft-delayed Colonial Marines would be something of an understatement — I was ready to be wowed. Unfortunately, Sega’s latest effort never fulfills its lofty promise and ends up settling in as a generic third-person shooter.

When playing as a marine the controls are standard Call of Duty fare. You click the analog sticks to sprint and melee, left trigger aims down the sight and right trigger fires your weapon. Most guns also have a secondary fire mode, such as the pulse rifle’s grenade launcher, that can be used via the right bumper, while the classic motion tracker is activated with the left bumper. Hold down one of the face buttons and a weapon wheel will appear with options (primary, pistol and explosive) mapped to the d-pad for quick shuffling.

In multiplayer you’ll also spend rounds playing as a xenomorph, which can be dicey. Each type has its own primary and secondary attacks, and they can all climb walls and unleash fatal blows. However, it’s easy to get disoriented when crawling around upside down in an effort to ambush unsuspecting marines below. Plus, it seemed a little too easy to get caught on invisible objects — never a good thing when you’re trying to evade gun fire.

For a game that has been in development as long as Colonial Marines to have as many graphical hiccups as it does is equal parts surprising and disappointing. Listing them all would be a pointless endeavour so I’ll focus on the most damning one: missing animations. Far too often firefights with the aliens concluded with the creature essentially disappearing amid spurts of acid blood. Contrasting that with the epic way xenomorphs were torn asunder from pulse rifle fire in the film further diminishes the sense that you’re killing a truly dangerous creature.

Humans (friend and foe alike) are not immune to these shortcomings, either. Your squad mates have an awkwardness to their movements that makes it tough to become immersed in the settings, which while looking technically outdated still do a decent job of setting the appropriate tone. There are definitely moments when things click and you feel a sense of desperation, however, such moments are fleeting, and too infrequent to overcome the game’s many visual problems.

In-game dialogue is unremarkable, and I never felt invested in the new characters. Even tracking down Michael Biehn (Hicks) and Lance Henriksen (Bishop) to reprise their roles doesn’t do enough to elevate the vocal performances. The soundtrack, on the other hand, is quite good and does a strong job of creating a sense of continuity between the game and the film. Aliens’ signature sound effects are present as well.

Long heralded as official Alien’s canon — much to the excitement of fans like me that loved the second film and detested how quickly it was all thrown away in the third one — Colonial Marines offers up a paper thin story that pretty much trashes the franchise’s established timeline. I won’t get into the plot holes, other than the obvious one that the game is set almost entirely in a place that was supposedly destroyed in a nuclear explosion at the end of Aliens, but suffice to say that any fan of the series that was looking forward to top-flight exposition will be disappointed.

Set 17 weeks after Hicks, Ripley, Newt and half of Bishop escape Hadley’s Hope on LV-426, you play as Corporal Christopher Winter, who is part of a search-and-rescue team sent to investigate what happened to the crew of the Sulaco. Upon arriving you find that the xenomorphs have been busy, and that the nefarious Weyland-Yutani corporation has already sent a team of mercenaries in advance of your arrival to study the potentially lucrative bio-weapon. Naturally, things go to hell in short order, and a new group of marines are thrown into the fire.

For most of the game you’ll serve as part of a two- or three-person team. I must caution that I use the term “team” loosely, as friendly A.I. is largely unhelpful. Numerous times they allowed aliens to attack on my six and generally offered precious little help in most firefights. Enemy A.I. isn’t much better, either, as xenomorphs tend to charge straight ahead (rarely utilizing their superior elusiveness and speed to their advantage) and mercs are only too happy to let you circle around their cover.

Even with a rough plot and sketchy A.I., Colonial Marines does find a degree of success as an atmospheric shooter. Sprinkled throughout the game’s 11-mission campaign are some very enjoyable moments, highlighted by your initial encounter with the xenomorphs, which hints at the type of white knuckle appeal these creatures boast. Ultimately, there is too much of an arcade feel to the five-hour campaign given the subject matter, but it was engaging enough that I played through it a second time.

To encourage exploration (and potentially replay) each mission offers several hidden items as well consisting of dog tags, audio logs and “legendary” weapons such as Vasquez’s ass-kicking smart gun or Hudson’s pulse rifle. These guns are more powerful than the standard versions, but they cannot be upgraded and do not count toward completing in-game challenges.

Colonial Marines’ leveling system is fairly well done with both single- and multi-player experience combining to buff up your marine’s arsenal and appearance. Killing enemies, finding collectibles and finishing missions all provide XP. In addition, there are three challenges available at a given time that, when completed, offer up some bonus experience. The issue with these is that they are done sequentially, and thus fulfilling the criteria for the 10th challenge is meaningless if you haven’t completed the ninth one. In some ways, that makes them feel like a cheap ploy to force you to replay specific sections to successfully complete the challenges.

Online multiplayer is also available, and if you can stick with it long enough to get a feel for the alien controls it’s actually pretty enjoyable. Marines operate just like they do in the campaign while the xenomorphs can see through walls, crawl through tunnels and drop down from ceilings to help even up the odds. Even with those abilities it’s rare to see the aliens come out on top as the human side just seems to be packing too much firepower.

Of the available adversarial modes (Team Deathmatch, Escape, Survival and Extermination) I found Escape to be the most interesting as you join forces with other gamers to make a fevered run for an extraction zone with xenomorphs nipping at your heels. The downside, however, is that there are a mere two maps on offer for that mode. Not exactly ideal for long-term replay value.

If you were hoping Aliens: Colonial Marines was going to be the franchise’s defining gaming experience you’re going to be disappointed. Both the campaign and multiplayer have moments that suggest what could have been… what’s here, though, never reaches its full potential.

The basic “move with the left stick, aim with the right” scheme is in effect here with the right trigger firing your gun and the left trigger using items (health packs and grenades). It’s simple enough, but aiming feels imprecise and there were several times when I thought I’d killed something only to have it attack me once I changed targets. Part of the issue is that your weapon’s laser sight is a bit too dim and can get lost amid the action.