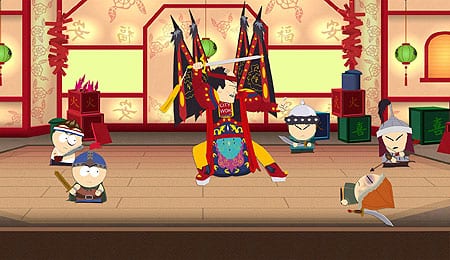 I’m gonna get you, fuckin’ Mongorians!

Decades of poorly conceived, disappointingly executed film/show tie-ins have left gamers a suspicious breed when it comes to licensed titles — hope for the best, expect the worst. Sometimes hope gets the best of us, however, even though the last time we experienced that Aliens: Colonial Marines was the end result. Despite delays similar to Colonial Marines and a publishing change from THQ to Ubisoft, we couldn’t help but be hopeful with South Park: The Stick of Truth. Thankfully, that optimism was rewarded with a game every fan of the show should absolutely love.

Action takes the form of a traditional turn-based RPG. Non-scripted battles are triggered when you strike a foe (or they strike you, the initiator goes first) in the world map. Once there you’ll have a number of options for each turn, such as consuming items, employing character-specific abilities, basic melee or ranged strikes and more. After you select your action and target, the game will ask you to press a button (or buttons) at specific times to deal damage. It takes a little while to get the timing down but becomes second nature in short order.

There’s also a handful of “magical” spells at your disposal that you’ll learn as you progress. These spells are actually farts that can be used to do things like destroy obstacles and distract your enemies. You can use them in combat or while traveling around town by manipulating the analog sticks — a setup that’s fairly responsive. While you switch between your farts using the right bumper, the left one allows you to access other abilities, like shooting objects in the environment or shrinking in size.

While most of the core action is well thought out, The Stick of Truth does stumble in a few spots. The radial menu used for both combat and changing weapons/equipment feels a bit loose. Plus, the game’s low point is the incredibly unresponsive abortion mini-game, which would often not even read our inputs when trying to perform the injection.

It’s hard to imagine how developer Obsidian could’ve nailed the look and feel of the South Park TV show any better than this. The herky-jerky way the characters move is spot on, and there’s also a perfect recreation of the town’s various locations and, of course, its cast of characters. The melding of classic RPG elements like acquiring better armour and weapons with the fact that it’s really just a bunch of kids making up this ongoing conflict is represented through hilarious cosplay in their outfits. If someone didn’t know better they could easily believe they’re watching an episode.

Given that Matt Stone and Trey Parker are supplying the voices it should come as no surprise that everyone sounds how you’d expect. The dialogue is sharp and routinely hilarious, and it was common for us to randomly chuckle hours later just thinking back on a particular line. Music and sound effects are really good, too, though sometimes the background music becomes a little stale if you linger in one place too long. Still, the overall presentation is superb.

South Park: The Stick of Truth begins by having you create a character from scratch, allowing you to choose from dozens of hair styles, clothing options and so on. Once that’s done you’re ready to step into the world as the extremely quiet “new kid.” Your initial goal is simple: go outside and make some friends. It doesn’t take long for you to meet Butters, who introduces you to the war between the humans (led by Cartman) and the elves (led by Kyle) over the Stick of Truth.

There are four classes to choose from: Fighter, Mage, Thief and Jew. Each one contains a selection of unique abilities that can be upgraded as you see fit. However, in one of the game’s few notable missteps there’s isn’t much difference in playing one versus another. That’s because classes can equip any weapon or armour they like, meaning if you favour melee-based fighting you can adopt that approach regardless of class. There’s no benefit to pairing with specific buddies, either, so you’re likely to recycle tactics and companions on subsequent playthroughs.

Combat is rock solid as you team with one of six South Park characters that have unique offensive and supporting capabilities. You’re free to switch between them while in the main world or during fights, though it’ll cost you a turn if you make a change mid-battle. By far the most endearing aspect here is the way the game has reskinned classic RPG elements and attacks; for instance, Cartman can throw a tampon at an enemy, which “grosses them out,” costing them life each turn.

Defeating enemies earns you experience, which increases your health and skill meters and also lets you enhance the potency of special moves. Making friends via the game’s Facebook-inspired interface acts as the other half of character development with passive buffs being activated once you reach set numbers of friends. It all works fine; the problem is The Stick of Truth caps your development at Level 15, which is a number we reached many hours before the credits rolled. Given that your foes can scale to your level, we don’t understand the rationale.

Judged solely as an RPG, South Park could be found somewhat lacking due to its low level cap, similar class structures and short run time. Those elements don’t come close to telling the whole story here, however, as there are so many things that the game does incredibly well.

Followers of the series will undoubtedly get more out of the game as it’s absolutely chock full of fan service. Hundreds of items littered throughout the town, classified as junk, hearken back to previous episodes for a major nostalgia kick. Exploring South Park provides additional goodies with classic characters aplenty (some of whom provide side quests) and odds are you’ll spend at least a couple hours just soaking in the picture perfect recreation of the television show.

It’s a rare thing when you have high hopes for a game and it still exceeds them. Such is the case with South Park: The Stick of Truth. It’s brilliantly written and performed, and it nails the vibe of the show so thoroughly that it ended up being the most pure fun we’ve had with a game in a long, long time.