The Wire Troll: Lo and Behold, a Closer is Born in Houston 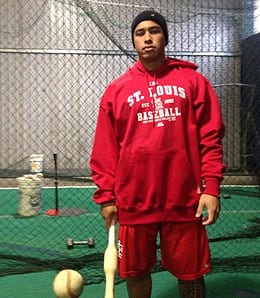 The Kolten Wong era has launched.

Alfonso Soriano seems to be enjoying his return to the Big Apple. He has been a one-man wrecking crew in the past week, going 15-for-25 with five homers, nine runs scored, and 18 RBI. He’s even chipped in with a couple of steals. On the other coast, Brandon Belt has hit five homers with 11 RBI and has scored 19 runs to go along with an off-the-charts .415 BA in August. There is something to be said for patience being rewarded.

Kolten Wong, 2B, St. Louis Cardinals (CBS: 18 per cent owned, ESPN: 3 per cent): The future at second base in St. Louis arrived last week and should be a decent option down the stretch. After a decent season at Double-A last year (see video below for highlights), Wong has been brilliant at Triple-A Memphis this year (412 AB, 10 HR, 45 RBI, 20 SB, .303 BA). Playing time could be a concern but it looks like the amazing Matt Carpenter will slide over to third base to provide some relief for the slumping David Freese.

Travis d’Arnaud, C, New York Mets (CBS: 34 per cent owned, ESPN: 1 per cent): The biggest part of the return the Mets got when they traded R.A. Dickey to the Jays has finally arrived. In 105 at-bats across three levels down on the farm the key skill worth noting for d’Arnaud is the batting eye: 25 walks vs. 23 strikeouts. That’s some serious strike zone judgment by this kid. The Mets didn’t bring their catcher of the future up to ride the pine, so expect d’Arnaud to be cause for some serious FAAB spending this weekend.

Chia-Jen Lo, RP, Houston Astros (CBS: 5 per cent owned, ESPN: 11 per cent): Just two weeks ago, we mentioned in the Troll that Lo could be an option in the Astros pen to fill the Jose Veras vacancy. The combination of Josh Field’s gopheritis and Lo’s mid-90s high heat has vaulted Lo into the ninth inning gig.

Marco Estrada, SP, Milwaukee Brewers (CBS: 39 per cent owned, ESPN: 11 per cent): Since coming back from a two-month DL stint, Estrada has looked super sharp (two starts, 11 IP, five hits, no walks, and only one earned run). Is it possible he’s going to duplicate his 2012 stretch run (3.12 in August and 2.63 in September last year)?

Jake Arrieta, SP, Chicago Cubs (CBS: 6 per cent owned, ESPN: unowned): Arrieta shut down the Cards Friday for first victory as a Cub. If he can keep the walks down, his strikeout potential is intriguing.

J.A. Happ, SP, Toronto Blue Jays (CBS: 9 per cent owned, ESPN: unowned): Happ followed up his strong effort against Oakland with a solid outing Saturday for the win against Tampa Bay. Two straight solid starts for any Toronto starter is worth noting.

Nick Castellanos, OF, Detroit Tigers (CBS: 21 per cent owned, ESPN: unowned): Andy Dirks and Matt Tuiasosopo haven’t exactly been lighting it up. Is a September callup in the works for the Tigers’ young phenom?

LaTroy Hawkins, RP, New York Mets (CBS: 17 per cent owned, ESPN: 49 per cent owned): In last week’s Troll RotoRob mentioned that Hawkins was the go-to guy for the Mets in the ninth. Not enough people were listening as he’s still sitting on the wire in way too many leagues at CBS.

Sonny Gray, SP, Oakland Athletics (CBS: 32 per cent owned, ESPN: 14 per cent): You can argue that the gem Gray tossed Wednesday should be taken with a grain of salt given that it was against Houston, but you can’t deny the results. He has Joe Saunders and Seattle next on the schedule. Mixed leaguers should be paying attention as this ship is setting sail.

Juan Francisco, 1B/3B, Milwaukee Brewers (CBS: 29 per cent owned, ESPN: 12 per cent): Francisco comes cheap, and is quite possibly the only power threat in Milwaukee.

Andrew Lambo, OF, Pittsburgh Pirates (CBS: 12 per cent owned, ESPN: 2 per cent): The Bucs have gone the internal route in search of some power down the stretch. Snatch Lambo up in NL-only formats.

Emilio Bonifacio, 2B/OF, Kansas City Royals (CBS: 17 per cent owned, ESPN: 10 per cent): The Royals have been struggling to find a capable player at second base all season (and really, for several years now). Since Bonifacio was acquired from the Jays, he’s swiped four bags in four games. If your need is speed, he could be a difference maker.

Who’s your favourite waiver wire pickup of the week? Let us know in the comments below.

Lidle has been a worse pitcher in the second half in recent years, and you’ve got to figure the move to the AL hurts him as well, so don’t expect too much. For what it’s worth, he has won both starts he’s made at Yankee Stadium in the past three years, but was mediocre in doing so. Overall, Lidle is a perfectly average pitcher and the Yankee offense can help mask that with runs, but that doesn’t mean his ERA is something you want on your team.