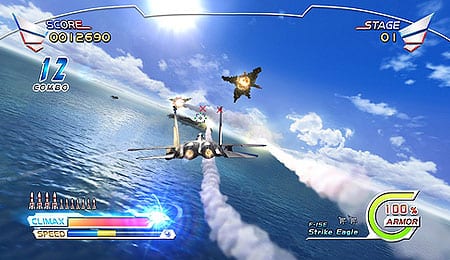 While there is seemingly no end to the number of sexually themed jokes I can throw out there about a short game with the word “climax” in it, I’ll try my best to abstain. After Burner Climax is a modern classic of an arcade shooter that is all about creating as many white knuckle moments as possible, and on that front it succeeds. Even without the immersive arcade cabinet jarring your body in every direction, there’s still plenty of intensity to be found in of the on-screen action. Yes, it’s a short ride, but this is definitely one of those titles that are easy to learn yet difficult to master.

The action in After Burner Climax takes place at breakneck speeds and thankfully the simple controller layout allows you to keep up. You move with the left stick (up/down are inverted), fire your machine gun with X and launch missiles with the square — you lock onto your targets by painting them with your targeting reticule. Accelerating and decelerating are handled with the L2 and R2 buttons.

As you destroy enemies your “climax meter” will build up. Once it’s full you can unleash it pressing L1 or R1. Doing this slows your enemies down to a crawl and allows you to target all of them for one huge missile burst. It’s a great way to escape trouble and is responsible for some of the game’s most exciting moments visually.

After Burner Climax is somewhat unique in that it’s a very good looking game, but because the action moves so fast you can’t really appreciate it unless you’re watching someone else play. Your jet looks great, gliding and rolling smoothly to evade a nearly endless stream of missiles. Speaking of which, it’s always fun to watch your own missiles track enemy planes with a trail of smoke that ends in a nice explosion. The backdrops also look very good and are surprisingly varied.

The music is your typical rocking arcade fare, though the game does present you with the option to toggle between the After Burner Climax and After Burner II soundtracks prior to the start of a game, which is a nice option for long-time fans. Friendly chatter is repetitive, but never becomes annoying. The sound effects are the best part of the audio package with rewarding explosions and the always satisfying ping of locking onto a target.

Things start off with an aircraft selection where you’ll be allowed to pick from three different looking, but identically performing, planes. From there you’ll embark on a journey that will take you from one frenetic firefight to another. It’s pretty straightforward as this is an on-rails shooter, meaning the game is guiding you from Point A to Point B. After each stage you’ll be scored in three areas — the number of planes you shot down, your longest combination and completion time — before moving on.

The game does offer some secondary objectives, known as emergency orders. Complete these orders and you’ll unlock additional levels to complete, though even a full 15-level playthrough will only take around 15 minutes. Fail to successfully execute these objectives and the game ends after Level 13. You are presented with a few branching options during each playthrough, but you will likely have seen every level the game has to offer inside of an hour.

Given its amazing brevity, After Burner Climax is clearly trying to create an intense experience that will make you want to repeat it over and over again in an attempt to better your score. To help mix things up a bit, the game offers a set of EX options, which can be adjusted to affect gameplay. You unlock them by playing through the game and accomplishing certain goals. For example, if you shoot down 50 enemies with your gun you’re given the option to increase the gun’s power. Get enough “game over” screens and you’ll be allowed to continue more times, and so on.

The more items you unlock and turn on, the more destructive you can make yourself. It’s a lot of fun to turn your basic fighter jet into a total badass, and it successfully extends the replayability.

Beyond the primary arcade mode, After Burner Climax also comes with a Score Attack, which grants you infinite lives and sends you through the same 13-15 levels as you try to earn medals. Making it more challenging, medals can only be earned with the EX options turned off.

I can see the value of After Burner Climax varying greatly from one person to the next. On one hand it’s over incredibly quickly, but it’s also a blast to play and there’s something refreshing about a game that doesn’t require a huge time investment. Priced at US$10 (800 MS points), After Burner Climax packs a seriously intense punch and is a quality pickup-and-play option.