Posts Tagged ‘A World of Keflings’ 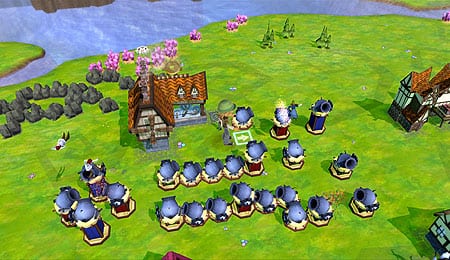 Don’t get the wrong idea, these cannons aren’t for warfare…they’re for launching Keflings.

It used to be that Microsoft ran just one signature event per year on Xbox Live Arcade, but Games for the Holidays marks its fourth such effort in 2010. With a clear emphasis on family gaming, the promotion kicks off this week with A World of Keflings from developer Ninja Bee. At first I wasn’t too interested, but it turns out I misjudged the allure of controlling a giant version of my avatar.

While not a visual dynamo, A World of Keflings has a cutesy art style that fits well with the game’s family-friendly vibe. There’s not much detail in the Keflings themselves, but the various buildings look cool and there’s enough variety in what you can create that someone willing to invest the time could make their lands look impressive.

Conversely, the game’s audio did nothing for me. The Keflings speak in high-pitched gibberish while the background music is a very mellow, repetitive effort. There’s nothing terrible about it, but I did begin playing with the volume muted as the hours began to accumulate.

You are a giant that has mysteriously been frozen in a block of ice. Upon being thawed you are asked to build a mighty kingdom nearly from scratch. At its core, A World of Keflings is about harnessing and then utilizing resources as you try to help out the various inhabitants of the game’s three realms. I would liken it to a streamlined version of Civilization — well, Civilization without combat, political machinations or anything resembling consequences to failure.

The game does follow that same type of branching progression system, however, as completing one building usually unlocks the blueprint necessary to build another, more complex one. Early on you’ll be constructing basic dwellings for your Keflings to live in with just a handful of components made out of your region’s raw materials. As you advance those, blueprints will get more complex and will often need refined resources. For instance, trees must be turned into planks, which are then made into carved wood. It’s a familiar yet successful approach.

Of course, gathering all those materials and assembling buildings is time consuming. That’s why you’ll want to enlist the help of your Keflings, who are willing to take on whatever job you assign them without question. They can be used to cut trees, mine ore, transport goods, oversee a building or any number of other tasks. As they work, they will become more efficient and can level up if you smack them on the head.

Driving the story forward is a handful of unique Keflings, who provide instructions on how to proceed whenever an exclamation point appears over their head. If you ever get confused in regards to your next step, squeezing the left trigger will clue you in and help get you back on track.

And therein lies the biggest issue with A World of Keflings — there is virtually no challenge. The game is pretty much beating you over the head and telling you what you need to do next throughout the entire experience. Go here, talk to them, build this, repeat. There’s never a time limit, never a consequence for destroying every tree in a land, nothing. You cannot fail at this game.

Even with a non-existent degree of difficulty I still had a lot of fun because A World of Keflings makes creating and customizing a world such a smooth process. It’s also one of those games that just eats time because there is always something to do. While reviewing it I’d stop, thinking I’d played 15 minutes, and it would be closer to an hour.

Beyond the single-player mode, which took me around eight hours to finish and can be extended indefinitely if you’d like to tinker with your towns, there is also a multi-player component. Local co-op lets you add a helper, while online allows you to visit other gamers’ lands via Xbox Live. There weren’t a ton of chances for me to test this aspect, but what games I did join ran smoothly. Plus, with multiple giants working together you can get things done more quickly.

A World of Keflings clearly wasn’t meant to be challenging, it was meant to be accessible and fun — and in those areas it has succeeded. If you’re in the market for some casual fare, this surprisingly addictive title is worth your while.