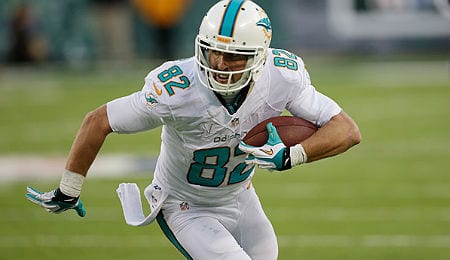 Yes, we know this is one mother of a bye week. So many studs are off and others are hurt (i.e., Tony Romo, who is a game-time decision and A.J. Green, who is at 80 per cent). If your record is at .500, your tears are probably turning into sweat and your stomach is lurching. Settle down, we’ve got your back. Tap that box of wine and read our Start ‘em or Sit ‘em picks for Week Nine.

Eli Manning, QB, New York Giants vs. IND: A large number of stud QBs will get a chance to rest a week as they are on byes. Enter Manning, who has possibly the highest the ceiling of those available, especially given the fact the Colts defense was so sorely exposed by Pittsburgh in Week Eight. We don’t see him as an option to be trusted each week but under the Monday Night Football lights, a shootout beckons.

Mark Ingram, RB, New Orleans Saints @ CAR: Earlier this season when Ingram was injured, you may have chosen between Pierre Thomas and Khiry Robinson. Now Thomas and Robinson are both hurt and Ingram will get yet another chance to shine. Look for the Saints to gain an early lead and make the mature decision to ground and pound. We know we are not going out on a limb with this selection, but if there are any doubters out there please share this with them.

Brian Hartline, WR, Miami Dolphins vs. SD: After being shattered by the Broncos last Thursday, the Chargers will attempt to contain the fireball that is Mike Wallace. The emerging Jarvis Landry (13 receptions on 16 targets in the last three games) will also demand some attention. So basically, Hartline shall be left floating in a pool of single coverage. Though Hartline’s days as a PPR mainstay are dwindling, this could be the game to use him, since guys like Jordy Nelson, Julio Jones, Alshon Jeffery and Brandon Marshall are all on byes. Can Hartline duplicate his virtual feats (see video below)?

Andrew Hawkins, WR, Cleveland Browns vs. TB: It is certain that Hawkins will match up against Alterraun Verner at some point in this game. Yet, the Browns know how to move Hawkins around. He can be solid motion man and a beast on screen and slant plays. Hawkins finally scored his first TD on a sweet goal-line slant play Sunday. He is the WR1 in Cleveland and is currently only owned in 43 per cent of Yahoo leagues. So as you realize you have terrible backup WRs, Hawkins can be grab and start option.

Jordan Reed, TE, Washington Redskins @ MIN: PPR Alert: Reed has 20 receptions on 24 targets since returning from injury three weeks ago. In fact, he ripped down all seven of his targets in Monday’s win at Dallas. Colt McCoy used him well and Robert Griffin III, who is expected to return, has a well-documented love for Reed. We saw the athleticism last season and Reed is finding it again after a rash of injuries. Start him with great confidence and look like a genius when he scores his first TD of the season.

Russell Wilson, QB, Seattle Seahawks vs. OAK: Do you really think Oakland is going to give the Seahawks a game? We don’t and therefore Wilson might not need to step on the field in the second half. No way he rushes more than absolutely necessary. We don’t expect Seattle to take the Raiders lightly but a winless team in a mad house like that could ironically spell bad Fantasy numbers for the Seattle QB.

Jerick McKinnon, RB, Minnesota Vikings vs. WAS: While we would be inclined to gamble on McKinnon in PPR formats, we must remind all old fashioned Fantasy standard league homers that the Redskins can stop the run. Don’t think you will see McKinnon dancing in the end zone Sunday. His story is a promising one but he is still a rookie and consistency will elude him.

A.J. Green, WR, Cincinnati Bengals vs. JAX: The same principal applies for Green as it does for Wilson above. The game appears to be a blowout on paper, and we must also take into consideration Green’s injury. We expect the Bengals to use Green much like they would in a preseason game, since they are essentially playing the NFL equivalent of a Triple-A squad. Can you say decoy? If you think the Jags can hang in Cincy go ahead and play Green. We’re going to wait another week.

Crave more Fantasy football chatter? Then join us every Wednesday at 1:30 p.m. EST for RotoRob Fantasy Football Weekly Podcast on Blogtalkradio as we commit personal fouls and chop-blocks for 90 minutes or so each week. Check out this week’s episode here.