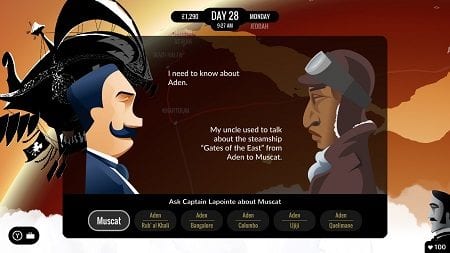 Originally released on PC in 2015, 80 Days has arrived on the Nintendo Switch, drawing direct inspiration from Jules Verne‘s classic Around the World in 80 Days and setting it in an alternate, steampunk-inspired 19th century world. It’s an interesting idea to be sure, and developer Inkle has made enough tweaks to keep even the biggest Verne fan intrigued.

Converted from a point-and-click adventure on the PC, 80 Days‘ controls are very simple with buttons and commands laid out in intuitive fashion. It’s all user friendly, and we couldn’t ask for anything more.

Games like 80 Days often take the easy way out when it comes to graphics. This one turns that notion on its head, however, by employing a super sleek and minimalistic look. The lack of detail actually aids in gameplay, as the map only reveals locations once the player has learned about them. Also, each city or town has its own colour scheme and, often times, design.

On the audio side, the soundtrack for 80 Days follows the minimalistic style of the graphics. Many of the travel scenes only have noises from the mode of transportation, which also makes the music upon arriving in a city that much more impactful.

While 80 Days takes tons of inspiration from the source material, it also deviates from the original quite a bit, most notably with its inclusion of multiple pathways. Players can choose any possible route across the world, meaning its replay value is nearly limitless.

Each city and transit line offers unique challenges for the player to navigate, which often change between playthroughs. The sheer amount of variety all but ensures that players will never become bored.

These situations range from the mundane, like chatting up elderly women, all the way to fighting in an impromptu boxing match aboard an airship. Each choice you make directly affects your journey, as good outcomes can open new pathways while negative ones can cause massive destruction.

Gameplay unfolds as it would in a book, until the options are displayed. Remember those choose-your-own-adventure books you read when you were little? 80 Days borrows that concept and absolutely perfects it. Each choice carries genuine weight, plus the writing quality remains consistently high.

Keeping in line with the book, 80 Days places you in the shoes of Passepartout, the French valet of the English gentleman Phileas Fogg. Fogg places Passepartout in charge of the entire adventure in addition to his usual valet services.

Each leg of the journey comes at a cost, both monetary and physical — for instance, opting for a cheaper mode of transportation may take a greater toll on Fogg’s health, as well as your relationship with him. Maintaining a balance between your finances and Fogg plays a crucial role in the overall game.

As a valet, Passepartout carries and packs Fogg’s suitcases, meaning he can bring items to help their journey. Certain items reduce the physical wear and tear of specific transit types, while others can be sold at high prices in specific locations.

Talking to fellow travelers can provide tips on where these items can be found, or information on current events around the world. Keep these events in mind, as items, like a book of communist philosophy, can get you in serious trouble, depending on where you find yourself.

Once landed in a city, time continues to flow. Every mode of transit has a set departure time and date, so make sure not to be late. The time mechanic is one of the only issues we had with the entire game. Time flows very quickly, meaning you have to think fast to avoid getting stuck in a city overnight. The ticking clock adds another layer of realism to the game, but the speed with which it runs tends to be a nuisance.

80 Days checks in as one of the better games we’ve played this year. The multitudes of fully developed paths are impressive and create huge replay value, and the top-notch writing ensures players remain hooked for the entirety of their adventure.