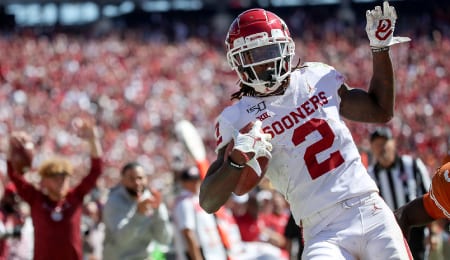 CeeDee Lamb is among the cream of this year’s WR crop. (JetsWire – USAToday.com)

We continue our 2020 NFL Draft Preview today by looking at our No. 11 and 12 top prospects. Previous part of the series can be found here:

Scouting Report: Lamb was a four-star recruit before becoming a Freshman All-American in his first year with the Sooners, starting 13 of 14 games and tallying 46 receptions for 807 yards and seven touchdowns. As a sophomore, he earned All-Big 12 honours when he led Oklahoma with 11 receiving touchdowns and 1,158 yards on 65 receptions. Despite already establishing himself as a bona fide wide receiver, Lamb volunteered for punt return duties as well. In 2019, he led the Sooners with 62 receptions for 1,327 yards and 14 touchdowns in 13 starts.

Possessing good speed, great strength and superb ball hawking instincts, Lamb is this year’s top wide receiver prospect. He has big play potential on all three levels of the field leading him to average 21.4 yards per catch in 2019. Lamb is also incredibly gifted in turning his body and catching back shoulder fades at the last second.

He isn’t without his flaws. Concerns over Lamb’s durability and weight at the pro level should be examined closer. Against man coverage, he will need to run his routes cleaner and erase wasted motions while setting up his breaks. Lamb will also need to learn how to win off the line of scrimmage against more physical corners. He has grown accustomed to losing press coverage fights at the line to opposing college defensive backs.

Sam Darnold has been waiting for a weapon to throw to and now the Jets organization will have a chance to draft Lamb. With Robby Anderson out, Lamb is likely to step right into those shoes. Fittingly, Anderson never really ran a route under eight yards, taking away concerns that Lamb’s short game needs work. Expect a lot of back shoulder fades and 15-to-20 yard out routes from Lamb this season. Whether or not he beats opposing cornerbacks is a different story.

There are those that are hoping New England will land Lamb at pick 23 (see video below), but unless the Pats trade up, good luck with that.

Scouting Report: Despite not having played a single down, Chaisson was offered a scholarship by LSU when he tagged along with his friend to a football camp. Starting three of 12 games as a true freshman in 2017, Chaisson tallied 27 tackles, 4.5 tackles for loss, two sacks and two passes defended. In 2018, he tore his ACL in the season opener while posting five tackles and a sack in his only game of the year. In 2019, the tenacious young man helped lead the Tigers to their national crown. Along the way, Chaisson led the team with 13.5 tackles for loss and 6.5 sacks in 13 starts.

He would have been this year’s top edge rusher if not for Chase Young. Chaisson demonstrates quick lateral movements, an explosive first step and possesses incredible agility to get around linemen. His hand techniques are also superb as he’s mastered a wide variety of swipes, rushes, punches and bull rushes. The most dangerous of all, however, is Chaisson’s ability to convert speed-to-power and power-to-speed. He can effectively stab and bend to get to the quarterback as easy as stunting out and bull-rushing up the A gaps.

Injury concerns hang over him (as discussed he missed most of 2018 with the ACL injury, and two games in 2019 with an ankle injury), which may be an issue given owners propensity to avoid risk during the current Covid-19 crisis. The bad timing has the potential to bump Chaisson down the draft board. On the field, he has had a habit of losing his feet when dipping the edge. Chaisson must learn to repel blocks into his body, and instead punch and stack to create separation. He is not a great run-blocker, despite his ability to read plays, creating inconsistencies on run-stopping plays. Lastly, Chaisson has difficulty dealing with heavier tackles. Outside zone runs with an established tackle like Terron Armstead will give him trouble.

The Las Vegas Raiders ranked 30th in the league for pass defense, giving up 4,107 yards, 33 touchdowns and clawing back just nine interceptions. Oakland allowed a league-worst 7.8 yards per attempt and 103.8 pass rating (31st in the league) to opposing quarterbacks, while sacking only 5.73 per cent of the time (25th in the league). The Raiders lack front seven pressure and drafting Chaisson will immediately help. Hopefully, Las Vegas will use Chaisson the same way Denver uses Von Miller by standing him upright and moving him around the line, creating mismatches. We have no doubt Chaisson also possesses the instincts to play weak-side linebacker if need be.

Canadian singer Neil Young has been at it since 1963 and it still performing today. In 1977, he released a triple-album (two discs) compilation entitled Decade, and from this effort came “Broken Arrow,” a song by Young’s original band, Buffalo Springfield.

Now it’s your turn. How do you see this section of the NFL Draft playing out?