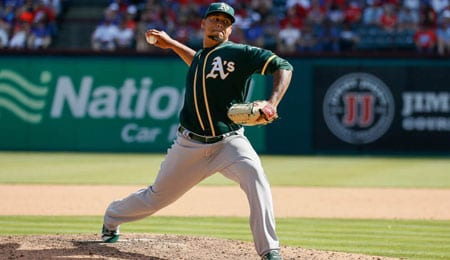 Welcome back to another week of Fantasy baseball. We’re nearly into late-May now, which means the 2018 MLB Draft is just over two weeks away. Time to start planning ahead by checking out those mock drafts and doing some scouting.

This week, Pirates’ minor league shortstop Ji-hwan Bae has headed back to his native South Korea to be questioned by police in a domestic violence investigation; Dansby Swanson (wrist) has been activated from the DL; and Jason Heyward (concussion) has also returned from the DL, saying his first concussion really opened his eyes to the dangers of this ailment.

And now, let’s get to this week’s Fantasy baseball waiver wire recommendations, as we offer up a couple of youngsters — one of whom just got the call, and another who may get a promotion soon as well.

Frankie Montas, RP/SP, Oakland Athletics (ESPN: unowned; CBS: 1 per cent): With both Andrew Triggs and Brett Anderson going down, Oakland will need rotation reinforcements. This could be the perfect opportunity for Montas, who is already on the 40-man roster, as he’s been rolling of late. Over his last three starts at Triple-A, he’s earned one win while giving up 17 hits, four earned runs and four walks in 20 IP. Montas has 15 Ks over that stretch. It’s a stark contrast to his April struggles (0-3, 6.19 ERA), and he’s managed to trim his overall ERA to a much more serviceable 3.75 mark over 36 IP. This hard-throwing Dominican worked a career-high eight innings in his latest outing, and even if the strikeouts weren’t there, maybe that’s not a bad thing given how effective he was. He’s certainly shown strikeout potential before (see video below). Let’s see if the A’s give him a look in the rotation; Montas could surprise.

Austin Meadows, OF, Pittsburgh Pirates (ESPN: 10.3 per cent; CBS: 31 per cent): With Starlin Marte (oblique) landing on the DL, Meadows was recalled to make his long-awaited MLB debut on Friday. The rookie wasted little time making an impact, going 2-for-4 with a stolen base while playing flawlessly in centre field. Pittsburgh’s first rounder in 2013 (ninth overall), Meadows had been enjoying a solid season at Triple-A, scoring plenty of runs while racking up a decent amount of total bases. If you want him, you better move quickly.

Jimenez may be the next top prospect to get recalled. After missing some time at the start of the season with a pectoral injury, he’s gone 30-for-90 so far at Double-A, but is really heating up lately. He had a streak of nine straight multi-hit games, and had gone 19-for-43 over the last 10 games, with 10 RBI before Saturday (when he was 3-for-5 with a homer and three RBI). Jimenez’s walk rate is down, but he’s offset that by making better contact. It’s clear he’s ready for the next step, so jump on him now while his ownership is fairly low.