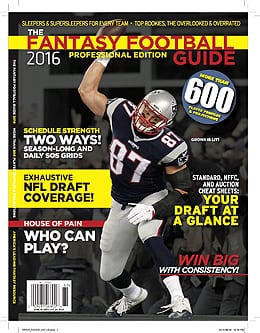 You need this to dominate your Fantasy football draft.

RotoMan’s essential annual Fantasy football magazine, The Fantasy Football Guide, has now been unleashed on an unsuspecting public, and the 2016 version marks a third straight year in which RotoRob himself participated in the actually writing as opposed to simply the editing.

Of course, RotoRob.com peeps — past and present — are well represented within the pages of the 2016 Fantasy Football Guide, this year featuring New England Patriots TE Rob Gronkowski, one of the NFL’s leaders in TDs last year, as the cover boy.

Present and former RotoRob writers that lent their experience to this project include: Andy Goldstein, Herija Green, Buck Davidson and Matt Wilson.

The 2016 Fantasy Football Guide also launched an online version this week, available here. As an added bonus to all our readers, simply use promo code RotoRob and you’ll save $1. Yup. We love our readers that much.

The only big change this year is Bob Lung’s article about Clutch Rate, his metric for finding players who performed better than their overall stats look.

Other features of the 2016 Fantasy Football Guide:

You’d be well advised to have this mag on you when you attack your Fantasy football draft this year. It’s the best way to ensure you kick your competition’s ass from here to Tuesday.

Look for the 2016 Fantasy Football Guide in bookstores near you or purchase it online here and save a buck off the cover price by using promo code RotoRob.