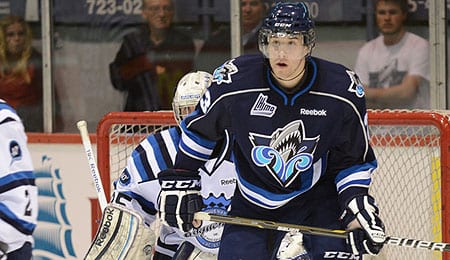 The Leafs might have gotten a steal at No. 21 in Frederik Gauthier.

Our NHL Draft Recap concludes today. Part I is here and Part II can be found here.

21. Toronto Maple Leafs — Frederik Gauthier, C, Rimouski (QMJHL): This 18-year-old centre will try to turn around the fortunes of an organization still stinging after its monumental Game Seven collapse against Boston. The Leafs got good value, landing the 6’5″, 210-pounder this late. Gauthier’s stock was rising leading up the draft (you can get a sense of his skills from the video below), yet he wound up falling on draft day.

22. Calgary Flames – Emile Poirier, LW, Gatineau (QMJHL): One of three first rounders for the Flames, Poirier is a product of the Olympiques, who always seem to know how to develop offensive talent. He enjoyed a breakout campaign, racking up 70 points in 65 games last season in the Q.

23. Washington Capitals – Andre Burakovsky, LW, Malmo (Sweden-2): Right after the Caps grabbed Burakovsky, the Erie Otters picked him fifth overall in the CHL import draft. He really impressed people with his performance in international play and his skating ability is top notch.

24. Vancouver Canucks – Hunter Shinkaruk, C/LW, Medicine Hat (WHL): Shinkaruk is a big part of the process to restock the prospect coffers in Vancouver. After terrorizing the WHL with his offensive exploits – especially over the last two seasons – he’ll soon be ready to see if that talent can translate into the pro game. Shinkaruk is not a big man (5’11”, 175) but he’s a gifted skater who should be a force to be reckoned with in time.

25. Montreal Canadiens – Michael McCarron, RW, USA U-18 (USHL): The Michigan-born McCarron’s next step should be interesting: will he play for Western Michigan University or come to the CHL and lace ’em up for the London Knights? Some thought he was only a late second round talent, so did Montreal reach for him here? One thing is for sure: McCarron is a beast physically (6’5″, 234).

26. Anaheim Ducks – Shea Theodore, D, Seattle (WHL): The Ducks were drawn to Theodore, 17, for his skating and puck moving abilities. He’s got some serious filling out to do (6’2″, 154), but time is on his side. Theodore has some very nice offensive skills and upside, but he won’t be ready for prime time for a while.

27. Columbus Blue Jackets – Marko Dano, C, Bratislava (KHL): Austrian-born (but Slovakian-representing at the international level) Dano grew up idolizing Marian Gaborik and now he might get the chance to play for the same team in Columbus. Based on what he did at the most recent WJC, Dano could be a serious offensive force.

28. Calgary Flames – Morgan Klimchuk, LW, Regina (WHL): Taken with the pick the Flames got from the Penguins in the Jarome Iginla trade, Klimchuk proved he can produce, averaging over a point per game on the Pats despite being really the only offensive threat on his team. He also earned valuable experience playing for Team Canada in a couple of tourneys last season.

29. Dallas Stars – Jason Dickinson, C, Guelph (OHL): The second Dallas first rounder this year, Dickinson is a beanpole (6’2″,176) who knows how to generate offensive chances. Many didn’t see him as a first-round talent, but he has the ability to lay any doubts to rest if things break right. In fact, Dallas may have gotten a steal here.

30. Chicago Blackhawks – Ryan Hartman, RW, Plymouth (OHL): Hartman grew up as a Blackhawk fan, so he’s obviously thrilled to land on the Stanley Cup champions. He’s a maximum effort player that will do all the dirty work and has no problem making his presence known to opponents despite his modest size (5’11”, 185). However, expecting Hartman to develop much of an offensive game may be a stretch.