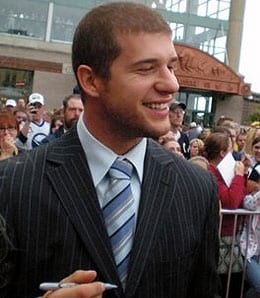 The 2013 RotoRob NHL Draft Kit wraps up today with the release of our final Fantasy hockey cheat sheet. So while you wonder whether Scott Gomez and Wade Redden can ever be relevant in the NHL again, let’s review our picks for the top 35 right wingers in Fantasy hockey.

Right wing is much like LW, where there are the top guys and then you have a drop. The strangest thing is it seems there is some shuffling among the big boys in this position which has muddled the tiers at least a little bit. Maybe it is because of the shortened season. We will see how it all plays out.

The stranger thing is there are some nice depth guys with big potential. Marian Gaborik has a nice combination in Rick Nash and Brad Richards to pass him the puck and if they all stay healthy, then look out. Right wing does have a bit more depth than left wing, so do not panic if you don’t draft Corey Perry or Martin St. Louis. Historically, this position has three or four top guys, five to seven guys in the second tier and then maybe some decent sleeper depth late.

1. Claude Giroux, Philadelphia Flyers (11): Giroux is in our Centre Rankings as well, but some leagues have him also eligible at Right Wing still so if that is the case, he is the cream of the crop going into the season. Admittedly we were wrong about Giroux last season as he rolled to a 93-point campaign including nearly 70 assists. The shortened season means prorated numbers, but 60 points is easily attainable.

2. Corey Perry, Anaheim Ducks (1): It was a brutal season for Perry who watched Ryan Getzlaf go completely into the tank for long stretches which hampered the entire first line. Despite everything, Perry did have 37 goals, including 14 on the man advantage. The problem was the meager 23 assists which I think he normally could get in 48 games. Those numbers should be a bit better from a points per game standpoint. Hang in there, Perry owners! It is going to be okay, honest.

3. Martin St. Louis, Tampa Bay Lightning (2): All you have to say is Steve Stamkos and you understand why we still rank St. Louis this high. Their chemistry is undeniable. The diminutive right winger still nearly had 50 assists in what was a bit of a down season for him. St. Louis did catch some fire late with Teddy Purcell, so do not be surprised if you see that line back together at some point which will mean an even better 2013 for St. Louis.

4. Marian Gaborik, New York Rangers (10): Health just always seems to be an issue with Gaborik, but this season his linemates in Brad Richards and Rick Nash will have a key role in the fate of his Fantasy season. It seems “Maid Marian” will be just fine but Nash (groin) and Richards (concussion) could have issues this season. If they are all 100 per cent, they are going to click but if one of them goes down, they all fall down. The linemates that would be replacements are significant downgrades. Needless to say, keep an eye on that trio all season especially with a condensed schedule.

5. Marian Hossa, Chicago Blackhawks (12): Hossa seems to go up and down but was on enough of an uptick last season to deliver 77 points. He even chipped in with nine power play goals and could have had more. I think Hossa definitely would have been a 30-50 guy with a bit more luck. Chicago had an uneven season offensively but with divisional play emphasized, I think that may help both the Blackhawks and Hossa. Keep an eye on who centres Hossa as well, because that will have a big bearing on his production.

6. Jason Pominville, Buffalo Sabres (16): Yes, “the population has just gone up in Pominville” is one of my favourite calls from a broadcaster, but I can see the right winger having another solid Fantasy season. He had 73 points and a nice 30-goal season to boot. This is a player that can create his own offense when Thomas Vanek goes on slight vacations and the such. Pominville does have point per game potential in a shortened season and people should be aware of that.

7. Patrick Sharp, Chicago Blackhawks (NR): Make sure you check eligibility just to be on the safe side, but Sharp is listed as both LW/RW. The 280+ shots, +28, and 69 points in 74 games are too hard to ignore and the drop off in wings makes versatility necessary. I remember when Sharp was a defensive liability in Philadelphia, but gradually in Chicago, he has turned his game around. Can he do it again? That will be the question and I believe that answer will be yes.

8. Phil Kessel, Toronto Maple Leafs (18): Kessel is usually never on the positive side of the ledger when it comes to +/-, but that part does not matter. His 23 power play points do and with his 40-40 potential, the bottom line is always solid. This season expect at or around a point per game because Kessel is going to have to be the focal point of the offense. Oh, there is that whole thing called money! Yes that is a driving force too for Kessel. I would still be bullish on Kessel — he is young and eventually he may find a better locale. There you have it.

9. Jarome Iginla, Calgary Flames (4): It was a tough season for Iginla, but the Flames have to hope for better health in 2013. With Sven Baertschi potentially on the scene for an entire season it will help, and a healthy Alex Tanguay wouldn’t hurt either. Granted, Baertschi could inject life into that line and it may be tried but Mikael Backlund looked good in camp. If Backlund ever stays healthy, his hands are too good not to be on the first line. Backlund — not Tanguay — is the key to a reinvigorated Iginla which Fantasy owners would like to see one more time.

10. Teemu Selanne, Anaheim Ducks (3): This has to be Selanne’s last kick at the can and he really felt responsible for last season’s disaster in Anaheim. The reality is there was little he could do, but the numbers should come up a little bit in this abbreviated campaign. It is hard to extrapolate what he will do but with the increased obstruction rules, Selanne could come close to 10 power play goals. The Ducks will try everything they can to maximize his scoring chances in this farewell tour of sorts.

11. Patrick Kane, Chicago Blackhawks (9): There is plenty of talent in Chicago, but can they coexist and score like they did a few years ago? Last season in the playoffs things unraveled quickly against Phoenix, leading some to believe that maybe the best had come and gone. This is almost a prove it season for Kane because the guy can score 35 but only tallied 23 in 2011-12. His shooting percentage was near 9 per cent and that is rather low for him. Expect a few more shots on net and some more goals to go in.

12. Teddy Purcell, Tampa Bay Lightning (26): Do not read into the current lines in Tampa too much. Guy Boucher will eventually go with Purcell along with Martin St. Louis and Steven Stamkos in some form or another in some way. Purcell was lights out when Vincent Lecavalier went down with an injury and some have said he is the perfect shotgun compliment to Stamkos. So don’t get impatient after the first two weeks. Stay the course!

13. Bobby Ryan, Anaheim Ducks (6): Since he mostly qualifies at RW, we figured here was the perfect slot for Ryan. Depending on the “Selanne Factor,” Ryan will get his points, but he does need to be a more focal part of the offense or he will never be able to fully adjust. This holding pattern has somewhat stunted his career and has given him a bit of a complex, in our opinion. Can Ryan break out? Our answer is see next season for that one.

14. Alexander Semin, Carolina Hurricanes (8): Semin is going to be a dynamic force in Carolina one way or the other. At last Eric Staal has that pop on the power play along with his brother Jordan and Justin Faulk on the blueline. It just seems to me this is a make it or break it season for Semin in the sense that he has to prove he can play away from Alex Ovechkin. If he can get it together, Semin has the tools to surprise many. It is mostly in his head. Let’s see what happens there down in Raleigh.

15. Rick Nash, New York Rangers (7): We’ve got Nash listed here as well as in our Left Wing Rankings, but in time he may just become solely LW eligible. If your league still has him listed at LW/RW, take the impetus and run with it. Again, LW is the slightly weaker vessel in this case so it may be wise to play him there. However, the decision is yours depending on your roster.

16. Dany Heatley, Minnesota Wild (5): Heatley will start the season on the top line with Zach Parise and Mikko Koivu but how long he stays there is anyone’s guess. With Mikael Granlund breathing down his neck, something tells us there will be a slight surge, some hope, and then the eventual slide down. Heatley will still put up some pretty good numbers but not the kind of digits a former 50-goal scorer should.

17. Radim Vrbata, Phoenix Coyotes (NR): Vrbata is a fun case even with the departure of Ray Whitney because he just has that knack of being in the right place at the right time (12 GWGs are evidence of that). Vrbata’s shot percentage was high at 15.1 per cent but even if it drops to 12 and the shots per game goes up a hair, he is still going to score. Shane Doan and Michael Boedker will be more than able to keep the sniper sniping, as they say.

18. Blake Wheeler, Winnipeg Jets (32): Wheeler is a feeder that has good hands. I once heard the same thing said about a young Joe Thornton who could put up 30-to-35 goals and 60+ assists. Now Evander Kane will have to raise his game for this to happen, but Wheeler could hit a ceiling relatively close to that in the future. Right now is a different story. In the meantime, expect a nice assist total and some goals this season.

19. Joffrey Lupul, Toronto Maple Leafs (NR): If Lupul stays healthy he will ride Kessel’s talent to a very nice result. However, if Lupul falters in any way, he is obviously a huge risk as his defensive skills are suspect at times so keep that in mind. The overall talent makes him worth a later pick in drafts. It can’t hurt to at least take a shot.

20. P.A. Parenteau, Colorado Avalanche (NR): This is another one of those players we suggest you just take a stab at and see if it works. Parenteau was a big beneficiary of the John Tavares effect with the Isles, but he does have above average playmaking abilities. Just hang in there and if Parenteau is available later on in drafts, it cannot hurt to take a risk. Take the plunge!

Keep an eye on Okposo in particular as he will be on the Islanders’ top line with Tavares. If the line clicks like last season, then Okposo is going to shoot up these rankings quickly. Just keep that mind — line combinations will be key this season because of the truncated schedule.