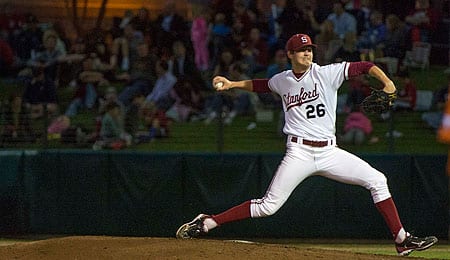 How quickly can Mark Appel become the ace of the Astros?

On Wednesday, we previewed the 2013 MLB Draft and now that the first round is complete, it’s time to see how things shook out.

Without further ado, here’s a rundown of the top 11 picks, with the rest of the first round to follow shortly…

1. Houston Astros — Mark Appel, RHP, Stanford: The Astros skipped taking the Houston native in last year’s draft, instead letting him slip to Pittsburgh, which couldn’t sign him (despite offering a $3.8 million signing bonus). Appel can bring the heat, regularly throwing in the 93 to 97 mph range, a weapon that allowed him to become the all-time strikeout king for the Cardinal (see video below). He should move through the Astro system quickly.

2. Chicago Cubs – Kris Bryant, 3B/OF, University of San Diego: We’re quite surprised the Cubs opted for a bat here instead of grabbing the other consensus top pitcher, Jon Gray. However, in Bryant, Chicago has landed a serious power bat – the top one in the college ranks this year. This 21-year-old is a former high school shortstop that the Jays were unable to sign after taking him in the 18th round in 2010. The next Troy Glaus? It’s a good comp, given that Appel also grew too big for short, shifted over to third, and is known for his pop.

3. Colorado Rockies – Jon Gray, RHP, University of Oklahoma: The Rockies, desperately trying to shake that image that they can’t produce pitching, were probably doing cartwheels when one of the big two hurlers fell to them – especially the one that will be easier to sign. Gray, who currently has the Sooners battling for a spot in the College World Series, is just 21, yet this is the third time he’s been drafted. He has a traditional power pitcher’s build (6’4″, 240) and his heater has reached as fast as 102 mph recently. Gray is a future ace in the Roger Clemens mould (except without the drama, hopefully).

4. Minnesota Twins – Kohl Stewart, RHP, St. Piux X High School (Texas): Stewart has a football scholarship from Texas A&M, but he’s reportedly already leaning towards signing with the Twins, who desperately need the pitching help. The 18-year-old has a projectable build with room to add strength. High school hurlers are a risky proposition this high in the draft (Stewart is just the fourth to go in the top five since 2005), but Minnesota must think he’ll buck the trend given that the team doesn’t tend to touch prep pitchers. So this pick is either a shift in organizational philosophy or a serious vote of confidence.

5. Cleveland Indians – Clint Frazier, OF, Loganville High School (Georgia): Cleveland needed more power in its system, so this pick made perfect sense. Frazier, who graced the cover of Baseball America’s draft preview issue, is just 18, but he’s already flashed incredible ability and maturity. Possibly the best all-around position player in the draft, he brings a little bit of everything to the table and the Indians have said they have no plans to move him from centrefield.

6. Miami Marlins – Colin Moran, 3B, North Carolina: Miami hadn’t really been linked to Moran, but given that some thought he was a darkhorse for the top overall pick, this could turn out to be a great selection. B.J. Surhoff’s nephew was not picked out of high school, but his performance in the 2011 Cape Cod League landed him on the prospect map. Moran can rake, but will he develop power? And will he improve his defense enough to stick at the hot corner?

7. Boston Red Sox – Trey Ball, LHP, New Castle Chrysler High School (Indiana): This was a vital draft for the BoSox as the team looks to rebuild its way back into perennial contention after the hiccups the past few years. Ball, a 6’6″ lefty, won’t be rushed by Boston, which is good news for his development, but not what you wanted to hear if you own him in a keeper format. The BoSox clearly love tall and projectable arms, and Ball’s lanky build has earned comparisons to Ross Detwiler — not a bad one to emulate given his showing this year.

8. Kansas City Royals – Hunter Dozier, SS, Stephen F. Austin: This pick caught most of us very much off guard. Dozier is a 21-year-old, 6’4″, 220-pound college shortstop that led the Southland Conference in hitting, slugging, doubles and homers, but the Royals probably could have had this dude with their next pick at 34. This was the biggest overreach of the first round, and he probably won’t even stick at shortstop given his size. Dozier has nice bat speed, but man, the Royals screwed the pooch here.

9. Pittsburgh Pirates – Austin Meadows, CF, Grayson High School (Georgia): This left-handed stick joins a system that is already pretty deep in the outfield, but as a high schooler, he’ll need time to develop anyway. Meadows, who projects to have above-average power, just turned 18 last month, and some thought he was the best high school prospect in the draft. Taken with the compensation pick the Bucs received for failing to sign Appel, Meadows may turn out to be a very nice consolation prize.

10. Toronto Blue Jays – Phillip Bickford, RHP, Oaks Christian High School (California): The Jays sure love those tall and athletics pitchers that can bring the heat, don’t they? The 17-year-old Bickford, at 6’4″, 200 pounds and armed with a heater that has been clocked as high as 97 mph, fits the bill. He’s raw, so don’t expect a rapid ascension through the system, but if he can develop better breaking balls to go with that lively heater, look out.

11. New York Mets – Dominic Smith, 1B, Junipero Serra High School (California): As always, California is a hotbed of talent, and the Mets hope that with Smith, they will get as fortunate as they did the last time they used their top pick to grab an LA-based high school hitter (Darryl Strawberry). With his bat speed and raw power, Smith projects as a 25-homer, .290ish hitter as a big leaguer. He’s a solid gloveman at first (in fact, it’ll probably be his best tool in time), and at the age of 17, there’s plenty of room for growth here.