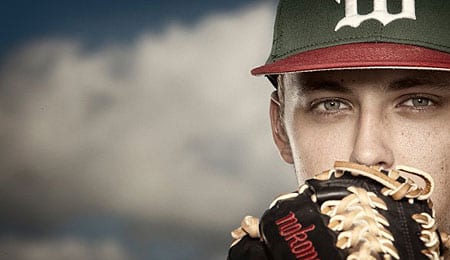 Jameson Taillon should be a stellar No. 2 starter in time. (Todd Sploth).

The 2012 RotoRob MLB Draft Kit finally wraps up today with the final part of our top prospects list. So while you Yu Darvish owners try to get over his awful first inning as a big leaguer, let’s finish our countdown with prospects 10 through 1.

10. Jameson Taillon, SP, Pittsburgh Pirates (18): When we ranked Taillon 18th last year, we expected him to begin his pro career at Low-A. Instead, the Pirates sent him to Class-A in Sally League where he did a pretty good job of limiting the damage and enjoyed a solid WHIP. The Pirates’ top pick from 2010 will open the season – along with fellow Pittsburgh pitching prospect Gerrit Cole – at High-A. Last year, Taillon averaged over a strikeout per inning, but his record was pedestrian as the Pirates worked hard to limit his starts, so he rarely went deep enough into games to get a decision. His BABIP was a wee bit on the high side last year, so there’s a good chance his numbers were slightly inflated as a result. Taillon is a huge dude (6’6”, 225) for a kid that’s only 21, but his mechanics are solid – and better yet – repeatable. He can reach 98 mph with his fastball (with serious movement), but generally throws in the 94 to 96 mph range. Some think Taillon can be an ace, but if you bank on him being a stellar No. 2 and get more, call it gravy. Damn, I love gravy.

9. Gerrit Cole, SP, Pittsburgh Pirates (NR): Cole was originally drafted by the Yankees in the first round in 2008, but he surprisingly opted to attend UCLA instead. That worked okay for him as after a fine three-year stint with the Bruins, the Pirates made him the No. 1 overall pick last year. Cole will make his pro debut at High-A this season and he’s a definite candidate to emerge as the Minor League Player of the Year. He did appear at the AFL this fall, and while his performance on the diamond was quite impressive, Cole came across as a bit of dolt off the field, according to our sources. Hopefully, he’ll mature soon, because we’ve all seen great talent frittered away by impetuous behaviour before. He’s beefed up since high school (he’s now 6’4”, 220) which should help his stamina as a pro. Cole’s fastball is among the best of any prospect and he has a slider that has the potential to be devastating as well. His change-up needs work, and although it’s come a long way. Clearly the top hurler available in last year’s draft, Cole looks like a prototypical power pitcher and should top out as an ace in time.

8. Jesus Montero, C, Seattle Mariners (6): Now that he’s been dealt to the Mariners, Montero will have a much better chance of being relevant simply because he’ll be put into a better spot on the weaker Seattle’s lineup than he would have been in New York. That should give the promising slugger a leg up in the AL ROY race, but from a Fantasy perspective, these gains in opportunity are somewhat offset by his move to a less hitter-friendly environment. Montero will spend most of his time DHing, but his real Fantasy value will kick in when he qualifies at catcher, which will depend on your league’s eligibility rules. He proved he can hit major league pitching in his late-season trial with the Yanks last year, and while he’s not exactly off to a stellar start this year, he could easily wind up as Seattle’s best hitter. This kid can rake and has the chance to be an elite hitter with pop, but he’s got the kind of physique that will need to be monitored as it will be easy for him to get plump as he gets older. Montero looks like a Future All-Star, and we won’t have to wait long for those appearances to start.

7. Manny Machado, SS, Baltimore Orioles (33): When we slotted Machado 33rd on this list a year ago, we talked about how his power would develop as he matured. Well, we definitely started to see that manifest itself at Class-A, where he also showed an elite walk rate. Baltimore moved Machado up to High-A, where his power took a hit along with the walk rate. Is this the year that he really takes a big step forward and becomes a Minor League Player of the Year candidate? Many think so, and that promise has allowed him to soar up our list. Machado will start the season at Double-A, so clearly the O’s were undeterred by his lack of dominance at High-A. Of course, let’s put things in perspective here: he’s not yet 20. Baltimore has been aggressive in promoting him, but considering his All-Star potential, it would be wise to give him enough time to marinate before rushing him to the Show. J.J. Hardy’s contract is up after the 2014 season, so that could work out perfectly for Machado’s arrival. Machado is considered a five-tool prospect, although we don’t see him racking up huge stolen base numbers in the majors.

6. Jurickson Profar, SS, Texas Rangers (NR): Texas’ top prospect, Profar has elite skills at both shortstop and the plate. He spent last year at full-season ball – at the age of 18 – enjoying a highly productive campaign while flashing tremendous on-base skills. Now 19, Profar won’t be rushed as long as the Rangers own Elvis Andrus, but he’ll probably be in Double-A by the end of the season, which will put him within a hop, skip and jump of Arlington. It’s a great problem for Texas to have – an abundance of high-level talent at a tough to fill position. Profar, a former Little League World Series hero from Venezuela, was the MVP of the Sally League last year, and while his ultimate ceiling may be limited, it sure it looking like he’s going to arrive in the majors at a very young age.

5. Julio Teheran, SP, Atlanta Braves (4): We’re expecting big things from Teheran, starting this season when we think he’ll be one of the top 10 rookies in the majors. He struggled this spring, losing his chance at a rotation spot, but he will get his chance at some point this season. Teheran made his big league debut last year, getting in a few appearances – mostly starts – with the Braves, and while he didn’t show the same level of dominance he did in the minors, that will come. This kid is just 21, and he’s already got IL MVP and Rookie of the Year trophies from last season when he racked up 15 wins in just 25 appearances (24 starts) with a brilliant 2.55 ERA. There has to be some disappointment that Teheran didn’t seize his opportunity this spring, but we still believe he has more upside than any of the Braves’ numerous pitching prospects. Once he makes the transformation from thrower into pitcher, there will be no stopping his ascension to Atlanta’s rotation.

4. Shelby Miller, SP, St. Louis Cardinals (25): Let the Miller Watch begin as it’s just a matter of time before he arrives in St. Louis. He began last season at High-A, dominating the league to the tune of 13.75 strikeouts per nine, although his walk rate rose from Class-A. St. Louis moved Miller up to Double-A, where his bottom line results were even better, a tremendous sign for a pitching prospect facing what is considered the hardest jump. The Cardinals’ top prospect has a fastball that can reach 96 mph, but generally sits in the low 90s. Combine that with a sweet curveball and you can see why he’s projected to be a No. 1 starter with a chance to put up some truly special seasons. Miller will start the season at Triple-A, but as soon as injury or infectiveness strikes one of the Cards’ starters, he’ll be making his big league debut.

3. Mike Trout, OF, Los Angeles Angels (3): Trout is ready for prime time, but the Angels have a glut of OF/1B/DH types, a situation that’s been exacerbated this season with the signing of Albert Pujols and the return of Kendrys Morales. Fortunately, Torii Hunter is on the final year of his contract, so a spot will open up for Trout by 2013 at the latest. Trout made his big league debut last year, showing his power-speed potential, but struggling to make contact. He’s started the season at Triple-A, and judging by the early returns (.538 BA through three games), Trout could force his way back to the Show fairly rapidly. Of course, until the Angels have an injury situation or clear the decks by making a trade, there is little point of promoting Trout just so he can sit on the bench. Last year, he benefited from a very high BABIP at Double-A, and then in the AFL, he wasn’t exactly super productive, so despite his hot start, perhaps Trout could use a bit of development time at Triple-A. His BABIP numbers have been extraordinarily high throughout his minor league career, and wondering if he can maintain anything close to that in the majors is a very reasonable question. Trout remains among the most exciting prospects in the game – a true five-tool talent who, at the age of 21, is already a very polished player with few obvious flaws in his game.

2. Matt Moore, SP, Tampa Bay Rays (17): One of our projected top 10 rookies for this year, Moore dealt with some abdominal issues early this spring, but the lefty was good to go when the season kicked off. He was a bit more susceptible to the home run ball at Double-A, but his 13.5 K/9 at Triple-A was all the proof we needed that this dude is a stud in the making. Moore continued to throw the ball by hitters in his brief look in September, and his start in the playoffs was off the charts crazy good. In fact, even while we are always a bit wary of rookie pitchers, it wouldn’t completely shock us if he was among the Rays’ top starters by season’s end. He’s got future top of the rotation starter written all over him.

1. Bryce Harper, OF, Washington Nationals (1): Harper is back atop our prospect rankings, only this time he’s close enough to the majors that we have also ranked him 54th in our Outfield Rankings. That was one of the big question now: would the phenom break camp with the Nats this spring? The answer is no, but he’s clearly matured since his first Spring Training, when at the age of 18 he said he wanted to make the team despite having never played a game in the minors. Harper managed to reduce his strikeouts in Class-A, but his pop wasn’t quite as impressive after a promotion to Double-A. Even though he has to begin the season at Triple-A, he won’t be spending much time there. Harper is one of those rare prospects that was nearly a household name before he was even drafted by Washington. Soon, we’ll get to see if he can live up to the hype.