For the sixth straight year, RotoRob and our writers were involved in the creation of Rotoman’s superb publication, the Fantasy Baseball Guide. The 2010 edition includes profiles of 1,400 players – over 500 of which (all pitchers) were written by yours truly. You can imagine how I spent my October…and a good chunk of my November as well.

Imagine being naked in front of your grandmother. That’s the feeling you’ll have if you go to your draft this spring without the 2010 Fantasy Baseball Guide in tow. For over half the time this magazine has been being published I’ve been involved with it because I believe it’s the best product available. 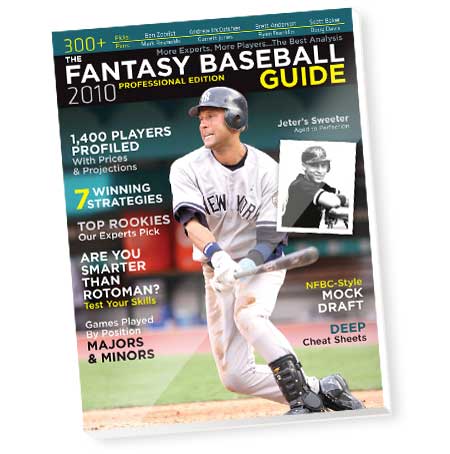 But don’t take my word for it. See for yourself why you need to pick up this book:

You can find the 2010 Fantasy Baseball Guide at Barnes and Noble, Walmart and many other places magazines are sold. It will officially be released on January 19, but should start popping up in various locales (like, strangely, Fort Frances, Ontario) this week.