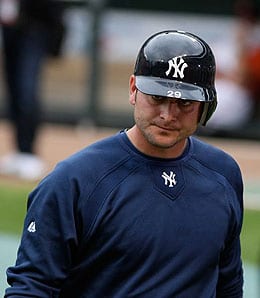 Francisco Cervelli is not an offensive or defensive upgrade over Jorge Posada.

The Texas Rangers got some great news when it was announced that oft-injured Nelson Cruz’s latest hamstring woe isn’t serious enough to keep him out of action in Game Six of the ALCS Friday as the Rangers look to knock out the Yankees.

Cruz enjoyed a big season, but was a headache for his owners as he endured three separate stints on the DL, coming off for the third time in early September just in time to help the Rangers wrap up the AL West.

Considering he missed a third of the season, and that he mostly hit out of the five or six hole, the 60 runs he scored this season is a very impressive total. And no one will quibble with that robust 950 OPS. A flyball hitter, Cruz likely would have matched his home run total from 2009 had he not gotten hurt. And once he returned in September, he really was on cruise control, batting .327 with six homers, 14 RBI and 21 runs for the month.

He’s hit safely in every game of the postseason so far, and while he “only” has one homer in the ALCS (after mashing three in the first four games of the ALDS), it was a loud and long one, helping put an exclamation point on the Rangers’ 10-3 thrashing of the Yanks in Game Four. Through five games of this series, Cruz has five runs, three doubles and three RBI, so the fact that he won’t miss any action is a real boon for Texas as it looks to advance to the World Series for the first time.

The Rangers obviously didn’t acquire Bengie Molina at the deadline for his bat, although bear in mind that last season he reached the 20-homer mark for the first time and drove in at least 80 runs for the third straight year, a rarity for a catcher. He was struggling with the Giants this season, but once he came to Texas he took those struggles to a whole new level. I mean, sure, he had that big breakthrough game in mid-July when he hit for the cycle, but he went right back into the tank for the rest of the month, didn’t do much in August and did even less in September.

So then the playoffs roll around, and all of sudden the 2006 version of Molina returns as he goes 5-for-14 with a homer and two RBI against the Rays and is 5-for-12 with three runs, a double, another homer and five – yes, five – RBI through five games of the ALCS. Oh, and how about him swiping his first base since 2006? Aye Carumba!

As if the Ranger lineup wasn’t potent enough, when Molina starts swinging lumber like that, it’s small wonder this team is a game away from going to the big show.

Over in the Yankee dugout, Molina’s counterpart, Jorge Posada, finally showed some signs of life on Wednesday, going 2-for-4 with a double, a run and a ribbie. He enjoyed a nice game in the opener against the Twins, but had been pretty silent since, so it was nice to see him contribute. The Yanks will need Posada to produce again Friday if they have any hope of extending this series.

Now 39, Posada is getting quite long in the tooth, and it really started to show in the second half as he scuffled to a .230 mark. He got off to an excellent start this year, but got hurt in May and was never really the same after that.

Posada actually wound up playing in his most games this year since 2007, but he couldn’t come close to duplicating the offense he generated last season. And despite his numerous trips to the postseason, Posada has never really shone in the playoffs, posting a career line of .241/.349/.378 in 119 games compared to his career regular season mark of .275/.377/.479. So we shouldn’t be surprised at all by his relatively quiet postseason this year, but if he does get hot it will go a long way towards extending New York’s season.

It’s not as if the Yankees can turn to Francisco Cervelli, who is inferior offensively and defensively. In fact, he’s one of the few backstop in the bigs that threw out runners less often than Posada did this season. The Yanks used Cervelli in Game Four with A.J. Burnett starting, because of Burnett’s long-time issues with Posada, and we all saw how well that worked out. Cervelli was 0-for-2 with a strikeout and Burnett got bombed, helping put the Yanks to the brink of elimination.

The Dodgers would like to bring back pending free agent catcher Rod Barajas, but everything is pretty much up in the air until the team’s ownership issues are resolved. We expected Barajas to be a top 25 catcher this year and thanks to a huge start, he actually exceeded our projections, winding up with top 20 value. However, much of Barajas’s value was eroded after he was dealt to the Dodgers and fell into a timeshare with A.J. Ellis. If LA parts ways with the rehabbing Russell Martin (hip), then Barajas could be useful if he returns to the Dodgers. But LA re-signs Barajas and keeps Martin, then Barajas is waiver wire fodder.

Ryan Doumit will remain catcher eligible next season, but that may be his only saving grace as a Fantasy asset. His hot start fizzled fast, and he was ultimately shifted to right field to make room for Chris Snyder. And while Snyder is no one’s idea of a long-term solution, Doumit’s window is closing rapidly as Tony Sanchez gets closer to being major league-ready. It’s likely that Doumit will only have value in NL-only leagues next year.