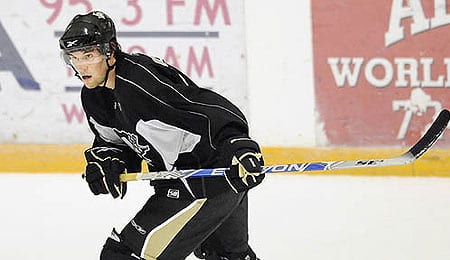 Eric Tangradi has a chance to be an impact player this season. Don’t sleep on him.

We’re now into the home stretch of the 2010-11 RotoRob NHL Draft Kit. So while you wonder how the shell of the defending Stanley Cup champion Blackhawks are going to possibly defend their title this season, let’s take a look at our picks for the top sleepers in Fantasy hockey.

1. Eric Tangradi, LW/C, Pittsburgh Penguins: There are quite a few people who have heard of Tangradi. This season he has a great shot at not only making the Penguins, but making an impact as well. Tangradi weighs about 210-to-215 pounds and his rangy, athletic nature belies a great pair of hands. He is currently projected to get top six forward minutes which means if he plays well in camp again, look out!

2. Mattias Tedenby, C/RW, New Jersey Devils: Tedenby is flashy, but diminutive in size to a point. His hands are not in dispute, however. In fact, Tedenby may have better hands than Zach Parise. Now, let’s be fair. Tedenby could bomb out and not even make the team or make a major impact from the third line for New Jersey. Either way, it will be an interesting story to follow.

3. Ales Hemsky, RW, Edmonton Oilers: Hemsky’s shoulder injury killed so many Fantasy hopes last year as he was the one option that could buoy Dustin Penner. However, many are sleeping on a talented Hemsky who can produce at a point a game clip when healthy.

4. Lars Eller, C, Montreal Canadiens: Here is another prospect who could see top six forward time. Eller could be paired with a guy like Tomas Plekanec, who could also flourish with a guy who has good hands and a solid shot on net. This may be a duo to keep an eye on and Eller may even seen first line time if he starts off with a bang.

5. Kyle Okposo, RW, New York Islanders: The NHL will see a resurgence on Long Island this season. For Okposo, his points per game have gone up each season and playing with John Tavares also helps. Okposo got his shots on goal up to 240 last season, and he could top out near 300 this season. He could easily break 65 points as well.

6. James van Riemsdyk, LW, Philadelphia Flyers: Some say Claude Giroux is most primed to be a sleeper for Philly, but not so fast my friends. Van Riemsdyk is a player that should be watched closely. As a matter of fact, he can break over the 60-point plateau — he has that much potential.

7. Victor Hedman, D, Tampa Bay Lightning: Some will think this is a stretch. With the team Steve Yzerman has now brought to the table in Tampa the talent is a notch higher, so Hedman will not have to learn quite so much. However, a jump to a 40-point season is not out of the question.

8. Mason Raymond, LW, Vancouver Canucks: Some will say the breakout was last season when Raymond jumped over 50 points. However, with Alexander Burrows out for extended time, Raymond could see time with Henrik and Daniel Sedin. Either way, even if he is paired with 75-point man Ryan Kesler, Raymond is a guy to take a look at because he will fly under the radar in drafts. Stay vigilant and reap the rewards.

9. John Carlson, D, Washington Capitals: This is Mike Green’s worst nightmare. Carlson is bigger, stronger, and actually plays defense which means he is ready to eat into some of Green’s minutes. Carlson showed some scoring skills in the USHL and OHL; expect some of that to rub off this season, so you may want to grab him now.

10. Jason Demers, D, San Jose Sharks: Now this is a controversial choice, but we are sticking with it because Demers should stick with the roster now that Rob Blake has retired. This is the one San Jose defenseman that could have more of an impact than anyone expects. Keep an eye out on him.

Some leagues penalize you for losses while others may put the emphasis on saves rather than wins. In this case, we’re going to use the default criteria as given by Yahoo!’s Fantasy hockey game since it’s the most widely played in the world. To that end, the focus here is on single-season performance with no regard for keeper leagues. Based on this criteria, the most important number to look at is starts, with wins and saves as other primary variables.