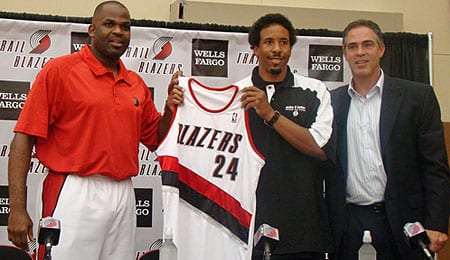 Can new PG Andre Miller (centre) lead the Blazers to the next level?

We’ve got more of the 2009-10 RotoRob NBA Draft Kit today with the first ever article on the site written by Andy “Mad Bunny” Holloway.

Three short seasons ago the Blazers won just 21 games, so their rapid rise to respectability and return to the playoffs has been nothing short of remarkable. But more than just dedicated fans think the Blazers will top their 54-28 record from last year, which was good enough for second in the Northwest division and fourth in the conference. Indeed, there’s good reason to think they could win 60 games and top their division if new point guard Andre Miller can seamlessly fit into the lineup.

There’s no doubt Miller, who signed a three-year $21.8-million contract this summer, is a talent, averaging 16.3 points and 6.5 assists with the Philadelphia 76ers last season, and he should be good to put up those numbers again. But he wasn’t the player the Blazers wanted this summer. That was Hedo Turkoglu, who verbally agreed to sign, but bolted to the Toronto Raptors instead. However, Miller gives his youthful new team a veteran presence as well as someone who can distribute the ball, even if no one fears he’ll make a shot from the outside. He also takes some of the heat off phenomenon Brandon Roy, who can now focus on being the excellent two-guard that he is, as opponents will also need to key on his backcourt partner.

Roy signed a five-year undisclosed contract extension with the Blazers this summer and his consistent play makes him well worth whatever money was paid. Expect even better numbers now that Miller has joined this lineup. Will that be enough to put the Blazers in the finals for the first time since 1992? The potential is there, but they will have to top the Los Angeles Lakers first and that means getting out of the first round, something the Blazers haven’t done since 2000.

Miller will be pushed by Blake to be the starting point guard, but the newcomer has the edge and the contract to be the man on opening day. Batum and Webster, returning from a season spent mostly on the sidelines with a foot fracture will battle it out for the small forward spot, with Batum figuring to start based on his continued improvement this summer playing for the French national team (alongside Tony Parker and Boris Diaw) at EuroBasket. Look for Outlaw to be in the mix there, too.

At centre, Oden and Przybilla will duke it out for time. Look for Oden to become the centre if he improves on last year’s so-so rookie season and stays healthy, but Przybilla will get plenty of minutes because Oden has a nasty habit of racking up fouls.

Without a doubt it has to be Roy, who should continue the ascent to superstardom that started when he was named Rookie of the Year in 2006-07. The 25-year-old two-time All-Star led the team last year with 22.6 points and 5.1 assists and while he likely won’t get as many helpers with Miller controlling the ball, his other numbers should improve, making him a first-round pick in most leagues.

This is not a knock against Blake, but his numbers from last year (11 points, 5 assists and 1 steal per game) have to decline if he’s not the starting point guard. Expect his points to drop below 10 and his assists to fall off since he won’t get 30 minutes a game with Miller and Roy taking up most of the guard time.

The Blazers have arrived as one of the elite teams in the NBA so their starting five will get a good look at draft time. Aldridge was a good sleeper pick last year, but will probably go fairly high this year. That leaves Oden, who could be a low double-double man in his second year after averaging 8.9 points and 7 rebounds last year. The Blazers will shoot a lot so there should be plenty of rebounds to mop up on the offensive glass. The key for Oden is to stay out of foul trouble (he led the league with 3.9 fouls a game last year) and hope he doesn’t get injured. More likely, though, Oden is a year away from being a sure bet.

It’s quite possible the Blazers will start the season without any rookies in their active 12. First-round pick Victor Clavert is staying in Spain for another season, but three second-rounders are trying to make the team. Two 6’9” forwards, Jeff Pendergraph (Arizona State) and Dante Cunningham (Villanova), will get a shot at supplanting back-up veteran Outlaw, but more likely will hit the D-League or be on the three-man reserve team, especially since Juwan Howard will likely take a third-line role to provide veteran experience. Pendergraph underwent hip surgery this summer and is questionable to start training camp. The fourth rookie, guard Patty Mills (St. Mary’s), might sneak in as the third point guard, but he broke his foot on the first day of rookie camp and may not be in good enough shape to steal a spot.

Will Miller fit in with the walk-it-up Blazers and can he defer to Roy as the go-to star? Can Oden stay on the court long enough to show that he has more than just potential to be an All-Star big man? Will the Trail Blazers suffer a setback after three straight seasons of improvement now that everyone knows they can be an elite team? Can Batum improve his range enough to ward off PT challenges from Webster?