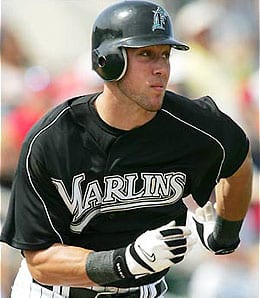 Jeremy Hermida got a sweet bonus as the 11th pick in the draft. (Midwestsportsfans.com)

Today, we continue our examination of the 2002 MLB draft. So while Nationals Manager Matt Williams tries to avoid police chases, let’s review picks 11 through 15 of the draft.

The Skinny: From picks nine through 21, Hermida received the largest signing bonus at $2,012,500 until another Jeremy (Guthrie) surpassed him at $3 million. The 6’3”, 195-pound Hermida made late moves up draft boards, adding 20 pounds to his frame in his senior year of high school. It’s hard to classify him as a bust because he played eight years in the Major Leagues, but his three best years were bunched together from 2007-09, and his last few years were spent trying to recapture that production before he flamed out with the Padres in 2012 — the last time he graced a major league diamond with his presence. Last year, Hermida showed good on-base skills in the Indians’ organization, but never got the call to Cleveland. This year, he’s moved over to the Milwaukee system, and is making better contact (although you wouldn’t know it in from the video below).

Strengths: Like Scott Moore (who we profiled in Part II), Hermida also drew comparisons to Eric Chavez with his smooth swing and plus baserunning ability to go along with a strong outfield arm. Hermida, a Clemson commit, had good power potential as a solid contact hitter.

Weaknesses: Hermida never could stick with a team even when it seemed like his tenure in Florida might work out – he played parts of five seasons for the Marlins, but has played for five teams in his career already. His “plus” speed never really materialized past the minor leagues, as he has just 22 steals in his career and never more than six in one season.

Final Analysis: Hermida’s three years of glory saw him average .267, 16 homers, 57 RBI and 23 doubles, but it was all downhill once he was released by Boston late in 2010, resulting in failed stints with Oakland, Cincinnati and San Diego thereafter. As discussed, the 30-year-old is still kicking around at Triple-A the past two years (and actually doing decently), but if he’s done as a major leaguer, his final tally is .257 with 65 long balls and 250 RBI in 632 games.

The Skinny: Saunders had been previously tabbed by the Phillies in the fifth round of the 1999 draft, and in many ways was not your typical high first rounder in terms of his arsenal. What he brought to the table was a much safer, more polished brand of pitching as a tall (6’3”, 195) southpaw who simply had a good feel for the craft. The Virginia Tech product is still hanging around (he is currently on the disabled list for Texas); Saunders is in his 10th big league season with his fifth different club.

Strengths: Not overpowering by any means, Saunders could push his fastball up to about 93 or 94 mph when he first arrived, but these days touching 90 can be a stretch. He throws quality strikes with an effortless delivery and complements his fastball with a great changeup, and he gets more ground ball outs than fly ball outs. Saunders also fields his position well.

Weaknesses: Because he doesn’t throw very hard, he is susceptible to the long ball, and the biggest knock on Saunders has always been that his fastball is as straight as an arrow. Four times in his career, Saunders has given up 25 or more home runs in a season and five times has had an ERA above 4.40.

Final Analysis: Considering he is still on a Major League roster in 2014, Saunders has mostly lived up to his first-round billing. He was an Angel for parts of six seasons before he began to take on “journeyman” status, but his best years were short-lived – 2008 when he was 17-7 with a 3.41 ERA and 2009 when he was 16-7 with a 4.60. Saunders hasn’t had a winning season since, and in fact led the league in losses in 2010 with 17. The best label he could earn today would be “serviceable,” or the always back-handed compliment that is being an “innings eater.”

The Skinny: Greene could have been so much more, but he was his own worst enemy and never blossomed into the star he was supposed to be despite brief flashes of greatness. He racked up the awards in college but ultimately his pro career was marred by injuries, inconsistency and battles with his mental health. In 2007, Greene hit 27 home runs with 97 RBI for the Padres. Two years later, he failed to finish the season with the Cardinals due to social anxiety disorder and played just 30 games after that, hitting a meager .200 (8-for-40). ENT NOTE TO MICHAEL; THIS DOESN’T SEEM RIGHT]

Strengths: The 5’10”, 190-pound Greene had a terrific all-around approach as a hitter, and 2007 showed the best of his abilities. From 2004-07 he averaged nearly 33 doubles with nice power and solid production. Greene also was solid in the field, committing just 11 errors during that pinnacle campaign of ’07.

Weaknesses: Though touted as a patient hitter that would take walks, Greene never got on base enough, just twice posting an OBP above .300 in seven seasons, and he never stole bases either (five was his high water mark). His social anxiety issues became overwhelming and though he was given a shot with the Texas Rangers in 2010, the team voided his contract prior to that season.

Final Analysis: Greene was a fan favourite in San Diego during his brief heyday, but quickly fell out of favour with the team, was dealt to St. Louis after the 2008 season and his career was basically over after that. He finished with a .245 average, 90 home runs and 352 RBI in 736 career games.

The Skinny: Middle infielder Adams was somewhat comparable to Drew Meyer (who we discussed in Part II), although he at least had something to show for his non-flashy skill set coming out of UNC. The slender (6’1”, 170) Adams was the top prospect in the Cape Cop League the summer prior to being drafted, but was essentially your classic overachiever. He was a line-drive hitter rather than a power threat and a steady if unspectacular fielder. He played parts of five big-league seasons, all with Toronto.

Strengths: Adams was more of a pesky player than anything else… a leadoff-type hitter that could work counts and get on base. He relied on making contact and employing his speed when he could, had solid hands in the field, with the ability to play any infield position except first. Adams also saw some action in the outfield, mostly at Triple-A, but a few games in the bigs as well.

Weaknesses: After a productive 2005 season, Adams simply could never catch on with the Blue Jays, playing just 125 games between 2006 and 2009 with very underwhelming numbers. He became your classic utility player with limited skills that was stuck in a platoon when he did crack the lineup. Adams wasn’t quite the fielder he was cracked up to be, committing 26 errors for a .952 fielding percentage in 2005.

Final Analysis: In 2005, Adams looked like he might stick around with the Jays for a few years, batting .256 with eight homers, 63 RBI, 11 steals, 27 doubles and a .325 OBP in 139 games, but it was all downhill afterward. One of the key issues was that the Jays’ top pick in 2003 was Aaron Hill — simply a better version of Adams. Adams latched onto the Mets’ organization on a minor league deal in 2010, but retired from professional baseball in May 2011 at age 30.

The Skinny: Mets fans are still fuming about this. Kazmir and Joselo Diaz were dealt to Tampa Bay for Victor Zambrano and Bartolome Fortunato in a 2004 trade that netted the Mets very limited production and fleeced them of one the organization’s true gems. Kazmir has battled his share of injuries throughout his career, but is going strong these days with Oakland after spending time with Tampa Bay, the Angels and Cleveland in addition to a year of Independent baseball with Sugar Land of the Atlantic League.

Strengths: The baby-faced Kazmir only dropped to No. 15 because he was considered undersized at 6’0”, 170, but he entered the draft armed with a fastball that touched 96 mph and a plus slider. A potential dominant strikeout pitcher in the making, Kazmir rarely failed to post strong numbers when he was healthy.

Weaknesses: Injuries and decreased velocity started to befall Kazmir as early as 2008. He endured a highly production four-year span with Tampa Bay from 2005 to 2008, but things started to slip for him when he was traded to the Angels in 2009, and his ERA ballooned to almost 6.00 in 2010. By 2011, the velocity on his fastball had dipped into the mid-80s, and things got so bad that he had to spend the 2012 season in Indy ball, trying to work his way back to the majors.

Final Analysis: To Kazmir’s credit, he has stuck with it and has regained his form (for the most part), getting off to a hot start with the Oakland A’s in 2014. How bad do you think the Mets want him now? Kazmir has developed a changeup and mixes in an occasional curveball now, and despite the lag a couple of years ago, his 10-season career numbers read a respectable 80-71, 4.10 ERA, 1,224 1/3 IP, 1,167 hits and 1,193 strikeouts (as of May 5). To boot, he was at the heart of the Rays’ emergence in 2008 when the franchise captured the hearts of fans everywhere by winning their only AL Championship.

Now it’s your turn. Let us know in the comments below what you thought of this section of the 2002 MLB Draft.

Scroll down from the top of the 2002 Draft, and here is your first player to make an All-Star team. Greinke is still going strong as one of the game’s top pitchers for the Dodgers, but made his mark in Kansas City with a devastating curveball and a Cy Young season in 2009. He had his share of off-the-field issues, dealing with depression and social anxiety disorder to the point that he almost quit baseball after the 2005 season, but stuck with it and is all the wiser (and richer) for it today. At 6’2”, 195 pounds, Greinke isn’t an overpowering presence, but he is calm and composed and has excellent command of his pitches.