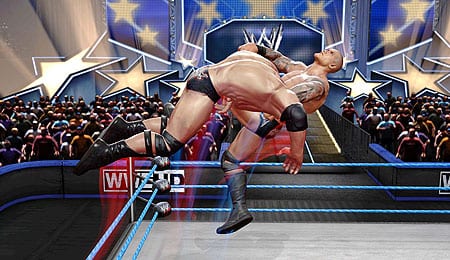 Surrealism has long been the realm of professional wrestling. In my years of watching I’ve seen acts committed that would land the perpetrator in a federal penitentiary in any other setting. Here, being trapped in your car and dropped from a crane equals a two-week absence. And yet, wrestling video games have rarely ventured into this cartoonish violence… until now.

Eschewing the analog-heavy setup found in THQ’s other wrestling title, WWE All-Stars maps nearly all your attacks to the face buttons. Wrestlers can access a number of grapples and strikes with one button each for strong and weak moves. The right trigger makes you run while the left covers things like entering the ring or climbing turnbuckles. Shoulder buttons are used for blocks and counters.

It shouldn’t take long to grasp the fundamentals, but that doesn’t mean you’ll be adept right away. In fact, there is a fairly deep combo system hidden beneath the surface — and I do mean hidden as the game is lacking a move list or in-game tutorial, either of which would’ve been welcome. Timing your counters also feels tricky and doesn’t seem to match up with on-screen prompts consistently.

Given the arcade vibe, it’s no surprise that the character models are completely over the top as every grappler appears chiseled out of granite. Muscles bulge, jaw lines protrude and hairlines that receded decades earlier are restored to their former glory. This “action figure comes to life” style looks cool and instantly creates a unique identity when compared to WWE SmackDown vs. Raw.

Move animations is where WWE All-Stars really shines, though. Watching three generations worth of wrestling superstars pull off insane versions of their signature moves is a sight to behold. Gravity is defied numerous times each match as players are practically slammed through the mat with some moves sending the victim rebounding into the air for even more punishment. Keeping with the cartoony theme there’s no blood, which limits how brutal the moves look.

Commentary is handled by Jim Ross and Jerry “The King” Lawler, who alternate between calling the action and giving pseudo history lessons of the competitors in the ring. Ross’ stories are interesting but other than that the work is forgettable. Theme songs, presented in snippet form during ring introductions, and sound effects are OK, but could’ve been delivered with more impact. The limited voice work found during the “Path of Champions” mode is well done.

Unlike the tactical, storyline-driven SmackDown vs. Raw series, WWE All-Stars is more of a throwback to the days of the Nintendo 64 and games like No Mercy and Virtual Pro Wrestling (WCW vs. nWo World Tour in the U.S.). Strategies such as targeting a body part for a submission or opening with weak strikes and grapples to wear down an opponent are out the window. You’ll still monitor your health, and a pair of meters fills to unleash signature moves and finishers, but it all boils down to pummeling your opponent from the opening bell until they can’t get up.

Unfortunately, WWE All-Stars’ biggest drawback is a lack of transparency as to how it’s supposed to be played. As mentioned earlier, the combo system intended to be a huge part of matches is never explained at any level. With SmackDown vs. Raw 2011 you found yourself in a training ring every time you loaded the game. Here, they essentially throw you into the deep end and let you sink or swim on your own. Most of what I learned was a combination of old fashioned trial and error along with trips to forum boards.

Cheap A.I. is another annoyance. Even on the lowest difficulty setting your CPU opponent will get to his feet in fractions of a second following the majority of your moves. It’s at its worst during three-way “elimination” matches. Theoretically it’s every man for himself, but more often than not the two CPU-controlled wrestlers will just follow you around, leaving you to rely on hit-and-run tactics. Essentially it is a Handicap Match except they don’t break up attempted pins.

With 30 wrestlers available on the retail disc (and over a dozen more slated for later DLC, including Chris Jericho and The Road Warriors) there’s lots of choices, and within that group wrestlers are broken into four sub-sets. You’ve got your Brawlers (Steve Austin), Acrobats (Eddie Guerrero), Grapplers (Bret Hart) and Big Men (The Big Show), all of whom offer different fighting styles to explore and master. Even within the groups there are no cookie cutter superstars — controlling Hart feels different than working with Jack Swagger, another member of the Grappler faction.

It’s the game’s ability to make wrestling as the various combatants feel different that supplies the majority of its replay value. That’s because there are only two offline modes of note: Path of Champions and Fantasy Warfare. The former is split into three 10-match gauntlets leading up to challenging the reigning title holder for the strap. There are two singles modes and a tag team offering, but they all boil down to simply defeating some portion of the game’s roster with a few brief cut scenes tossed in.

Of more interest to wrestling aficionados will be Fantasy Warfare, which pairs 15 legends with 15 current superstars for generational bragging rights. Each match is preceded by a montage video, which provides background info about the participants. In typical WWE fashion it’s slickly done and is sure to churn up some nostalgia (I had forgotten what a great talker Jake “The Snake” Roberts was).

Match pairings are hit or miss, but that’s to be expected since not every 1980s star has a 21st century equivalent. Still, for every dream matchup like Hulk Hogan vs. John Cena there’s a Ricky Steamboat vs. Kofi Kingston. Plus, isn’t the point of “fantasy” matchups to give us bouts we’ve never seen before? If so, then why did we get well know feuds like Undertaker/Shawn Michaels and Triple H/The Rock? Ultimately, though, you can book any match you’d like in exhibition sans the cool video intro so it amounts to little more than nitpicking.

WWE All-Stars also offers a create-a-wrestler mode, though it’s quite limited compared to what you’ve seen in other games. Most notably you’re forced to pick a move set belonging to an existing superstar rather than cherry picking your favourite holds. Created wrestlers can be used in the Path of Champions mode as well as online and in exhibition bouts, which include tornado tag (all four men fighting at once), cage and Extreme Rules match types.

Online play runs fairly smoothly, though you’ll still need to make some minor adjustments to your timing compared to offline. All match types available offline are available online, and — as you’d expect — the one-on-one bouts move more crisply than four-man offerings. There’s no progression system online, which feels like a missed opportunity.

Once you grasp the fighting system, WWE All-Stars becomes a lot of fun to play, particularly in local multiplayer where it breeds the same type of good-natured trash talking NBA Jam once did. It’s a bit shallow in some areas, but the core gameplay makes up for it.

Your attacks are broken down into strikes (X) and grapples (right stick), but you’ll be executing tons of different moves off those two basic commands. Think of it like a family tree, where moves branch off of one another. For example, you can start with a strong collar and elbow grapple by holding down the right bumper and pushing the right stick up. Once engaged, you then move the right stick up, down, left or right and your wrestler with pull off one of the four moves assigned to that grapple. You’re given four different strong grapples with four moves off of each, meaning you’ll have 16 possible attacks whenever you lock up. Plus, each strong grapple features a strike (press X while locked up) and a submission move (click the right stick), bringing the total of 24 moves.