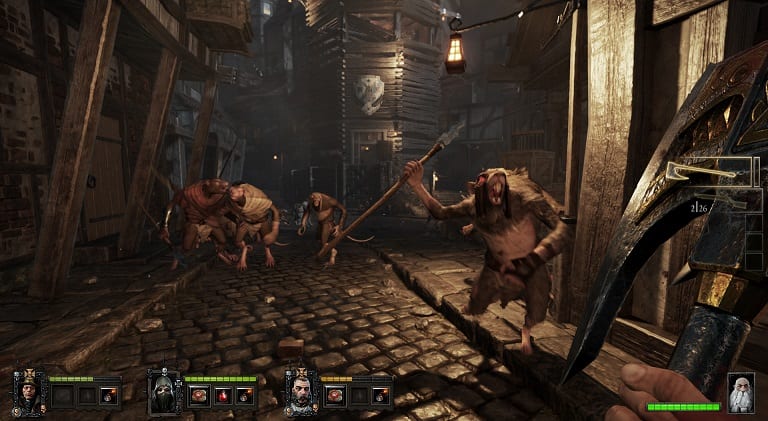 Warhammer: End Times – Vermintide is a bloody four-player co-op romp that sets you in the shoes of one of five different heroes brave enough to face the greatest threat the city of Ubersreik has ever known: an unrelenting flood of upright walking rats known as the Skaven.

No need to sharpen your axe beforehand, the skulls of these rodents will work quite nicely. The Skaven infestation used to be limited to PC, but it has spilled over onto the PlayStation 4 and Xbox One, so get your friends and start slashing!

Vermintide is primarily a melee combat first-person slasher/shooter that features hordes of enemies that will easily surround you, so we would recommend turning up your horizontal sensitivity quite a bit before you play as it’ll help you clear the area easier and cover your own back. The triggers defend (left) and attack (right), respectively. Interacting with objects is done by pressing or holding Square.

And with that you’re a pro at Vermintide because everything is smooth sailing. You can duck, but you’ll rarely find it useful. You can also dodge by holding the left stick in a direction other than forward and pressing “X,” otherwise you’ll just perform a regular jump.

Ubersreik and its surrounding areas are utterly beautiful and attention to detail is outstanding. Whether you’re beating back the horde in the forests and admiring the dense fog creeping through the trees or walking the rain-soaked avenues of Ubersreik’s marketplace examining blood-laced cobblestones glinting in the moonlight, the sights of Vermintide are remarkable.

There are also rats skittering about the streets every which way, creeping down walls and bursting through sewer pipes. All those damn rats animate wonderfully while doing so, and their combat animations are even better.

Vermintide employs Havok to provide ragdoll physics, so literally making a pack of rats fly backward minus their heads with the swing of a giant Warhammer is a satisfying and humorous sight. Each character has their own wonderful visual elements to them as well, like the elf Kerillian with her furry hood, or Victor Saltzpyre’s pilgrim-like tall hat.

On top of the wonderful visuals, the audio can positively floor you. When the characters aren’t busy bickering at one another between melees, they’re providing actual tips while you’re playing. Maps are huge, winding mazes more often than not, and navigating them just by sight is rather difficult, so it’s a gigantic plus for the characters to provide an indication of where to go.

For example, if there’s a Witch Hunter in your party (good old Victor), and he happens to be closest to the stairway you need to use, you will hear him say “Up these stairs, everyone! Make haste!”

In between fights you may hear a horn sound in the distance, and then the ground will start to thump with the feet of hundreds upon hundreds of angry Skaven bearing down on your position. That sound effect alone completes the feel that you are facing a truly endless, massive horde.

Vermintide features a campaign that takes you from the very beginning days of the invasion all the way to the ground-shaking conclusion, with some standalone levels tossed in for good measure. The game’s main menu is actually an Inn where you can walk around, check your weapons, upgrade them to unlock traits, and even craft new weapons.

At the centre of the Inn is a table with a map displayed. Approaching and interacting with it presents you with the matchmaking options. There are five characters to choose from, here is a rundown of their capabilities and roles:

Once you assemble a crew, you will contend with the horde at every nook and cranny of Ubersreik in an effort to secure barrels of dry gunpowder and bags of grain, while also sabotaging targets of opportunity that pop up along the way.

Mission structure generally consists of “Fight through this massive wave, have stand-off, bomb or smash some kind of support structure, escape via mysteriously untouchable carriage.” Even though the mission variety doesn’t vary much, the wonderful level design and superb character interaction make each trip through Vermintide a thrilling experience.

While Warhammer: End Times – Vermintide is a bit thin in certain areas, you’d be hard pressed to find a better co-op experience on your consoles right now.