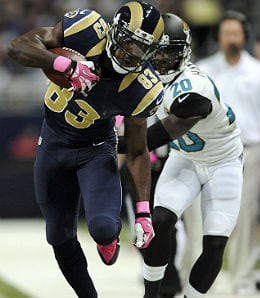 Brian Quick has quietly been getting it done. (nflrush.com)

While running back by committee (RBBC) is the new standard we feel it best to dig a little deeper and trust us when we say sometimes the shovel can unearth a pungent yet useful stench. With that we give up to the Fantasy football gods our Week Five Start ’em, Sit ’empicks.

Ben Roethlisberger, QB, Pittsburgh Steelers @ JAC: We would recommend nearly any QB facing this defense, even one that has had his share of legal issues like Roethlisberger (see video below). The Jaguars surrendered more Fantasy points to QBs than any other defense in September, and Big Ben is coming off a 300-yard performance with three scores. Pittsburgh’s defense has looked shaky, at least by its standards, which could keep the Steelers throwing the ball well into the second half this week. — NW

Doug Martin, RB, Tampa Bay Buccanneers @ NO: Why on earth would we recommend Martin? After all we’ve labeled him a bust on more than one occasion. He only has 49 rushing yards in the two games he has been healthy enough to play in. We simply believe Tampa has new life under the freshly anointed QB Mike Glennon and keeping Drew Brees off the field with long methodical drives will be key. Martin will be asked to eat the clock and gain three or four yards at a time. Let the “muscle hamster” roll against 24th ranked defense versus Fantasy RBs. We expect Martin to find the end zone at least once. — JJ

Brian Quick, WR, St. Louis Rams @ PHI: Through three games Quick, who we sagely recommended in the Wire Troll a couple of weeks ago, has 16 receptions for 235 yards and one TD. The QB situation is still uncertain for Sunday but Quick is certainly the No. 1 option in this passing game. He draws the Eagles, who have given up 10 TD passes in just four games. — JJ

Garrett Graham, TE, Houston Texans @ DAL: Frankly, we could say start your Texans and leave it at that. But, win or lose, the Dallas defense gets shredded by the TE. In fact, they rank dead last versus Fantasy TEs — have we said enough yet? Feel comfortable starting Graham over Travis Kelce, Coby Fleener, Dwayne Allen, Heath Miller or even Jordan Cameron. — JJ

Tom Brady, QB, New England Patriots vs. CIN: Oh, how the mighty have fallen. The Patriots looked like a shell of their former selves on Monday, and it may not get any easier this weekend against the Bengals. In three games, QBs only have two TD passes against this defense and the only 300-yard game was given up to Joe Flacco, who needed 62 attempts to get there. Brady is not only a must-sit for Week Five, but he could find himself on Fantasy waivers before too long. — NW

Alfred Morris, RB, Washington Redskins vs. SEA: Let’s see, the best defense the league has seen in years faces an offense that turned the ball over five times in Week Four. Unless Morris finds the endzone (Roy Helu and fullback Darrel Young each have vultured TDs away from Morris in the first month), he should be sat unless no other options are available. We may even consider Morris’ handcuff Helu a better option this weekend because of Helu’s role in the passing game. — NW

Brandon LaFell, New England Patriots vs. CIN: This summer, LaFell was one of our top 10 sleepers. So we are not surprised that he has emerged. Many will be encouraged by his six receptions for 119 yards and TD on Monday. But, don’t rush him into your lineup because this Bengals defense is for real and they will snipe and smote him all day. Also don’t forget prior to Monday’s game LaFell had just four receptions on the season. — JJ

Jason Witten, TE, Dallas Cowboys vs. HOU: The Cowboys have decided to rely on the running game so far, and with great success. However, this has come at the Fantasy expense of their pass-catchers, and Witten’s stats have taken a large hit. In Week Four, the aging tight end did grab a season-high five catches for 61 yards, but we believe Dallas would be better off using him as a blocker this weekend to help negate J.J. Watt’s impact as a pass rusher. — NW

By Josh Johnson
This entry was posted on Wednesday, October 1st, 2014 at 10:37 pm and is filed under FOOTBALL, Josh Johnson, Nick Wagner, Start 'em Sit 'em. You can follow any responses to this entry through the RSS 2.0 feed. You can leave a response, or trackback from your own site.