Odds on Who Will Win Next Season’s Super Bowl 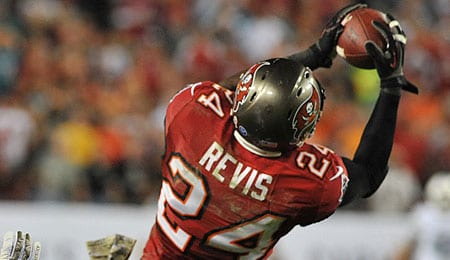 The Pats improved their Super Bowl odds with the addition of Darrelle Revis. (Al Messerschmidt)

The Seahawks didn’t get long to enjoy their Super Bowl triumph before everyone started debating who would win next year.

Now the early odds have been put out by bookmakers and there is at least some consolation for Seattle in that it has been installed as favourites to win it again. Some of the online bookies are offering just 6/1 on Seattle, and this no doubt means lots of American football betting fans will be rushing to place their Seahawks bets, but they are far from the only side in the running, if the odds are to be believed.

Another team up there in the preseason odds is the New England Patriots, a team that seems to have always been near the big prize since the start of the new millennium. You can currently get odds of just 10/1 on them to go all the way next season and, as playoff regulars and AFC East champs last season, it is far from an unrealistic bet.

The Pats have already started to prepare for the new season by signing free agent Darrelle Revis, but they have not won the biggest prize of all in a decade. Of course it is really far too early to be gambling on the winner of the Super Bowl right now, and the smart strategy would be to watch. Or play the Fruit Bowl XXV mobile casino slot at Gamingclub.com/nz in the meantime. It will pass the time until the season kicks off. As the name suggests this slot offers a funny blend of the traditional fruit machine and the modern online sports-based slot.

You get graphics of a stadium full of cheering fans and raring to go players, and it takes a while to clue in to the fact that they are all fruit! Yes, the cheerleaders are blueberries and the players are pineapples (amongst other things). It’s a neat twist, and the fun of the visuals is matched all the way by the quality elsewhere, from a 7,500-coin jackpot to the featured bonuses like Win-Win, which guarantees to pump up your payout.

All this makes Fruit Bowl XXV one of the best and most underrated NFL slot games you can choose to play.

By RotoRob
This entry was posted on Wednesday, April 2nd, 2014 at 12:54 pm and is filed under FOOTBALL, RotoRob. You can follow any responses to this entry through the RSS 2.0 feed. You can skip to the end and leave a response. Pinging is currently not allowed.