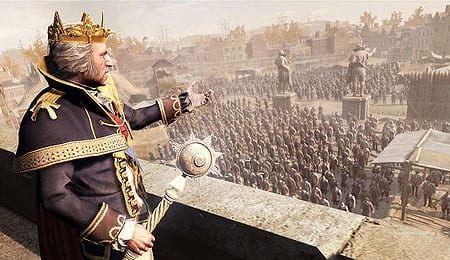 To summarize our feelings on the first two episodes, we thought The Infamy did a solid job of setting the stage while The Betrayal struggled to maintain the momentum. Now we’ve finally been graced with The Redemption, the third and final act of Ubisoft’s The Tyranny of King Washington. So, does your fated confrontation with the “Father of Our Country” present an epic conclusion and justify the US$28 (US$10 for the first two, US$8 for this one) it’d cost to download all three episodes? Read on.

You had to figure when the second installment concluded with Ratonhnhaké:ton setting sail for New York that we’d be getting some naval action on the Aquila. To that end The Redemption does not disappoint as it kicks off with some enjoyable ship-to-ship combat as you try to sink George Washington’s fleet and reach the shore. Clearly, these battles played a significant role in Assassin’s Creed III, but enough time had passed that we enjoyed their reemergence.

From there you’ll quickly gain access to your third animal power, the bear. For those scoring at home you can now disappear (wolf), travel point to point (eagle) and pound the ground to scatter enemies and destroy certain objects. It’s the most combat driven of your powers, and it’s fun to use… though strangely, this DLC is built more around the eagle ability that was introduced in the last episode. Also, the brief spirit quest plays like a fun homage to Shadow of the Colossus, which is never a bad thing.

Mission structure in The Redemption is easily the best The Tyranny of King Washington has to offer, tweaking the formulas you’ve come to expect. Stirring the city into a revolutionary frenzy via guerilla tactics isn’t as cool as it could’ve been, but it’s still different and offers you some options in how to go about it. Infiltrating Washington’s stronghold is also interesting as it shows some storyline bits and allows you to explore a completely new structure.

The final showdown with Washington is rather similar to your earlier skirmish as the whole thing is basically rock-paper-scissors re-imagined as wolf-eagle-bear. Here you’ll need to use one of your animal abilities at a time to penetrate the King’s supernatural defenses. The game is incredibly forgiving — so much so that I don’t think you can actually be defeated, only delayed. This fight gives way to a brief explanation that ties the DLC in with the main storyline, but it’s a pretty loose connection at best.

As with the previous episodes, The Redemption can be cleared in less than two hours with the same minimal offering of side missions (feed the hungry, attack the caravan, etc.) to supplement the short run time. That means it’s entirely possible to complete all three parts in 4-to-5 hours tops if you bypass exploration, which is easy to do considering the minimal rewards. Given the premium asking price associated with the add-on that’s not a lot of bang for your buck.

Without question, The Redemption is the highlight of The Tyranny of King Washington DLC because of its fast paced and varied action. If you’ve already purchased the first two it’s definitely worth your money to see how it ends. Conversely, if you’ve waited this long you’re probably best served waiting a little longer for it to go on sale.

By Herija Green
This entry was posted on Saturday, May 11th, 2013 at 1:11 pm and is filed under Herija Green, Video Game Reviews. You can follow any responses to this entry through the RSS 2.0 feed. You can leave a response, or trackback from your own site.