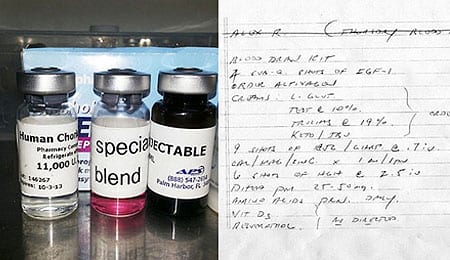 Anthony Bosch’s notes — and drugs — could get A-Rod in more hot water.

Back in an early October Podcast, we wondered why Bronson Arroyo instead of Mat Latos was starting Game Two of the NLDS for the Reds.

And then the wily vet went out and retired the first 14 batters he faced and wound up tossing seven shutout frames of one-hit ball with four Ks and just one walk for the win to give the Reds a commanding 2-0 lead in the Best of Five series against the Giants (that they would ultimately blow, but hey, that’s not Arroyo’s fault).

Oh… right. That’s why he was starting that vital game.

And that, in a nutshell, is the story of Bronson Arroyo: unsexy, overlooked and underappreciated, but ultimately dependable, durable and useful – especially in single league formats and 4×4 play.

One of the best things about Arroyo is his ability to start innings off well, getting that all important first out. In fact, last year he ranked third in OBP against (.244) versus hitters leading off an inning.

Overall, it was an impressive comeback effort for Arroyo. Coming off his worst season ever in 2011, year he put up arguably the second best season of his 13-year career.

Durability? He’s started at least 29 games every season since 2004.

He once again displayed decent hit rates, superb control (1.56 BB/9 was by far his best showing ever), and managed to cut his home run allowed total by 20 (in three more innings, to boot). Yes, you read that right — 20 less long balls.

Hell, Arroyo even upped his modest strikeout rate to 5.75/9 last year – his best since 2008. Yes, we get that he’s a liability is this regard, but still, factor in that WHIP (1.21 last year, 1.15 in 2010), his ability to either flirt with or achieve an ERA under 4.00 and his consistent winning (double-digit victories in seven of the past nine seasons, with nine wins each in the other two years), and you’ve got a perfectly boring yet functional – and fairly predictable option at a position that’s all about performance volatility and fragility.

As safe as milk. And just as sexy. What’s that? Milk can be sexy? Okay, we stand corrected.

Arroyo reduced his hit batsmen last year and was also much tougher to steal bases against with five of 12 would be stealers caught.

He remains a flyball pitcher, although it wasn’t as pronounced as it was in that ugly 2011 campaign when nearly 16 per cent of his flyballs left the yard. Last year, the figure was a much more typical (for him) 10.6 per cent.

Arroyo again is an afterthought in mock drafts this winter, with a current ADP of 321. He is currently the 112th starting pitcher going off the board.

But guess what? You can mark it down that Arroyo will likely win around a dozen games with a sub-4.00 ERA this year. And he’ll once again stay healthy enough to rack up over 200 innings.

The Twinkies actually showed modest improvement last year, if you can believe that a 66-96 record represents an improvement. After winning back-to-back divisional crowns in 2009 and 2010, Minnesota has now spent the past two seasons running from the shadow of 100 losses.